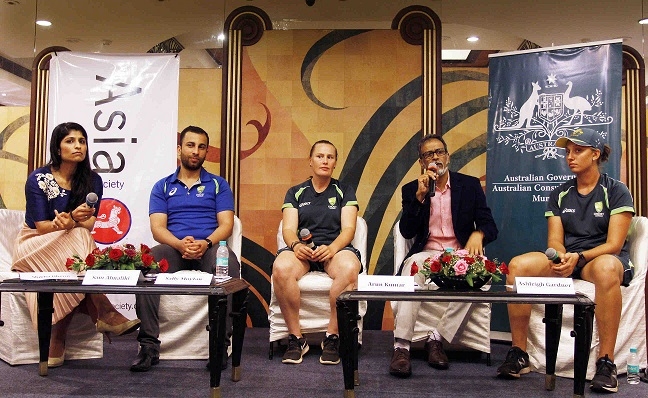 Mumbai - 27 May 2016- Shikha Uberoi, former India number 1 tennis player and moderator for the evening, sets the stage by referencing philosopher, Pierre Bordeaux’s, theory that sport makes us unique, and excel, and succeed. She sets the collective aim of the talk to find the correlation between safe and abundant access to sport and empowering women. In the 150 years Australia has sent an aboriginal team overseas, this is the first all female team; perfectly coinciding with the first day of Australia’s National Reconciliation Week.

Sally Moylan, with six 6 consecutive National championship wins for the Australian Women’s indigenous cricket team, spoke about what indigenous Australia means to her. She speaks of the stark differences and surprising cultural similarities between Moylan’s small town of 5000 people in the west of Sydney and the big city of Mumbai. Ashleigh Gardner, captain of Australia’s Women Indigenous Cricket team, and Moylan are thrilled to be here and even prouder to be representing their country and indigenous communities while doing the thing they love most; playing cricket. They recognize the importance of this impactful and memorable experience and believe it will expose the young girls to new cultures and make them more appreciative of their fortunate lives.

Arun Kumar offered a fascinating yet serious perspective on the issue by sharing anecdotes and statistics from his NGO Apnalaya. He sheds light on the terrifying statistics that exist in our backyard; a life expectancy of only 39 and a 76% female dropout rate (after 8th grade). Kumar argues that sports would help extend their education and delay their marriages. Apnalaya’s “Parivartan” (meaning “Change”) project involved 94 girls playing the traditional Indian game of Kabaddi. 72 girls completed the entire course of the program and none of the 94 dropped out of school or got married. Kumar explains the extremely conservative and archaic culture around these girls and the huge pressure to get married at a young age. Their traditional roots prevent them from things we take for granted like wearing t-shirts and shorts. A common response, dripping in sexism, when approaching the families about their daughters was “Why them? Why not the boys?” Despite these barriers, the strong and resilient girls went beyond their comfort zones and everyday restrictions to discover the power of sports and what they can do physically.

Sam Almaliki strongly believes that companies must be proactive and need to start things off by investing and sponsoring sportswomen. The more we train and encourage them, the more they will compete and succeed and the greater viewership they will draw in which will only further boost participation in the sport from other young girls who will finally have role models to look up. The past image of Australian cricket as ‘pale, stale and male’ is disappearing with the simultaneous promising growth in the viewership of female cricket with around 20000 viewers per game.

Despite our preconceived notions, Moylan and Gardener (from ‘western’ lifestyles) share the barriers they faced, Strict gender roles and the ideas of masculinity, unlike femininity, being linked to muscularity, surround the girls on a daily basis. Their fortunate, supportive backgrounds did not stop odd looks from opposing teams and strangers. Gardener highlights issues of discrimination faced particularly by indigenous women, something that is close to the hearts of Indian women on the basis of race, religion and gender.

Almaliki expresses the need for parents to be educated to equally include both their sons and daughters in sport even at a casual, family level. He explains the hopeless circumstances in which girls do not think of sport as an aim, let alone a viable career option. Unfortunately, they are not wrong. The Australian government has only just begun to pay for flights etc. for the women’s cricket teams, something they have always been doing for the men. Women just like Moylan are often forced to work, train and study simultaneously, or even take time off to study and earn before getting back into cricket. Their male counterparts however, are able to focus all their time and energy on just their sport while also earning money from it.

The panel ended with a few powerful words to keep fellow female athletes going. Moylan describes how there will always be people who want to put you down or don’t think you’re good enough, just make sure you “stay true to yourself.” Kumar concludes by encouraging women to “have mentors and mentorships to keep you going” for you and your family to look up to. He, like Almaliki, believes in breaking the cycle. If there are no mentors, become one.

This programme is part of Asia Society India Centre's Women of Asia Series, which brings eminent women from the fields of Asian business, arts, culture and policy, and provides a senior level platform for discussion on issues of current interest affecting Asia and the world.