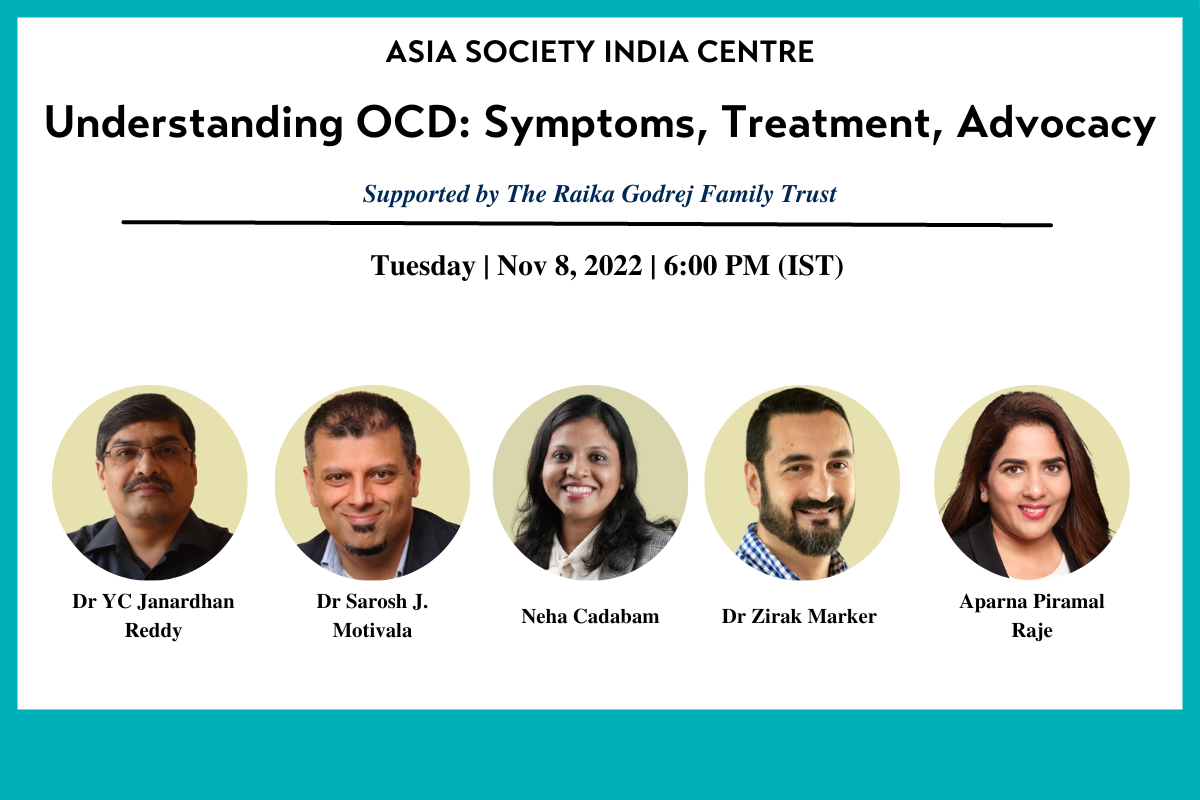 Despite significant movements within the mental health sector, public and private investment in mental health research is still minimal in India, and myths around mental health are pervasive in Indian society. This is particularly true for Obsessive Compulsive Disorder (hereafter referred to as OCD), which continues to be misrepresented and underdiagnosed across the country.

Repeatedly checking doors, washing hands excessively, restlessly ordering and arranging things in a particular way and continuous mental counting are some of the varied symptoms faced by those suffering from OCD. In addition to this, the disorder also involves symptoms like motor tics (sudden, brief, repetitive movements) such as eye blinking and other eye movements, facial grimacing, shoulder shrugging, head or shoulder jerking and vocal tics like repetitive throat-clearing, sniffing, or grunting. According to the International OCD Foundation, there are at least ten different types of common obsessions that comprise this disorder, including the fear of contamination, religious obsession and unwanted sexual thoughts.

For the most part, however, one hears the term OCD being used light-heartedly in common conversations as a casual descriptor for people with certain extreme personality traits such as cleanliness or orderliness – and not as a serious mental disorder which can adversely affect the quality of one’s life in a significant manner. Statistically, OCD is believed to affect approximately 2% of the general population globally. The numbers in India are similar –according to the National Health Portal of India, the lifetime prevalence of OCD in the general population is 2-3%, across men and women equally. A small fraction of an immense population, it is important to note that this figure only represents the medically confirmed cases of OCD. Across India and the world, OCD is a highly misunderstood and under-diagnosed serious medical condition that requires far greater public attention.

Medical research, public dialogue and advocacy around OCD are therefore of critical importance and must be done in an empathetic and inclusive manner. Left untreated, the severity of such a disorder can go beyond mental health to affect people physically; lead them to substance abuse; hamper their ability to lead a productive life, and potentially make way for other forms of mental health disorders including depression and anxiety.

Understanding the difference between true psychiatric disorders and personality traits is important, especially in the case of OCD where symptoms can easily be passed off as aspects of one’s personality. Thanks to concerted efforts by advocacy groups, non-governmental organizations, health educators, psychiatrists, psychologists and allies of mental health, in India and across the world, this perception seems to be changing gradually. Acting as key agents of mental health advocacy and support, these individuals and groups have been instrumental in initiating dialogue about mental health; raising awareness about the different kinds of mental health issues, and building an accessible and inclusive infrastructure to support its treatment.

The Mental Healthcare Act (MHCA) of 2017, which gives every Indian citizen the “right to access mental healthcare”, marked a landmark move in healthcare legislation; compared to its predecessor the Mental Health Act of 1987, this Act promotes a more patient-centric and rights-based approach. This Act has been key in opening the door to regulating and treating mental health conditions in the country. While the battle to de-stigmatize mental health continues through advocacy and on paper, quality treatment for mental health continues to be prohibitively expensive in many parts of the world. Among the moves being made to counter this, insurance companies in some countries, including India, are making provisions to cover mental illness in their policies.

Join us for a conversation with an esteemed panel of speakers including Professor of Psychiatry at NIMHANS Dr YC Janardhan Reddy, Director of Clinical & Research Training in the UCLA Adult OCD Program Dr Sarosh J. Motivala, Child, Adolescent & Family Psychiatrist Dr Zirak Marker, Executive Director at the Cadabam’s Group and psychologist Neha Cadabam and Columnist & Author Aparna Piramal Raje as they decode Obsessive-Compulsive Disorder, the myths, the treatments and the awareness around it. The conversation will act as a primer on OCD, affording insights on a highly misunderstood and serious mental illness and addressing questions such as What is OCD? What are some of the common and uncommon ways in which it manifests? What are its causes? How does it affect different demographics, especially in India? What are some of the conventional and unconventional ways of treating OCD? What role can policy, law, financial investment and civil advocacy play to support people diagnosed with OCD? And what is the future of research on OCD and mental health in India?

Dr YC Janardhan Reddy is a Professor of Psychiatry and Head of the Department of Psychiatry and Obsessive-Compulsive Disorder (OCD) at NIMHANS, Bangalore, India. Dr. Reddy has a special interest in studying the long-term course and outcome of OCD and bipolar disorders and in the management of treatment-resistant OCD patients. He has also been awarded the prestigious Sir C.V. Raman State Award for Young Scientists for the year 2011 by the Government of Karnataka. His research has been funded by institutions like the Indian Council of Medical Research (ICMR) and the Canadian Institute of Health Research (CIHR). Dr. Reddy is one of the principal investigators of an ambitious project funded by the Department of Biotechnology (DBT), Government of India, titled “Accelerator program for discovery in brain disorders using stem cells (ADBS)”. He is a member of the WHO Working Group on Obsessive-Compulsive and Related Disorders for revision of ICD-10. Dr. Reddy is the lead author of the Indian Psychiatric Society (IPS) Clinical Practice Guidelines on OCD and on Cognitive Behaviour Therapy in the treatment of OCD and related disorders.

Dr Sarosh J. Motivala is a licensed clinical psychologist and a cognitive-behavioral therapist specializing in research-supported treatment of OCD. He is currently the Director of Clinical & Research Training in the Adult OCD Program at the University of California, Los Angeles. As a faculty member at the UCLA Cousins Center for Psychoneuroimmunology he has used and evaluated research-supported psychological treatment approaches in working with patients with anxiety disorders and sleep disorders. Dr. Motivala has over 40 peer reviewed scientific journal articles, book chapters and conference presentations examining interactions between mood, stress, physiological outcomes and health. In addition to his work at the UCLA OCD program, Dr. Motivala sees clients through Spectrum CBT, an outpatient program specializing in treating anxiety disorders and OCD. His research is currently focused on examining the interplay of stress and poor sleep on mood and functioning in OCD.

Neha Cadabam is a Psychologist at Cadabam’s Hospitals and an Executive Director at the Cadabam’s Group. With over 12 years of experience in the field of mental health, her area of interest is preventive and promotive mental healthcare. She is very passionate about what she does and works closely in helping individuals to improve their mental health and in promoting lifestyle changes, and healthier habits in daily life. Neha specializes in treating various mental health issues like stress management, depression, anxiety, OCD and many others. She has a fond interest in working with children too. The treatment methodologies she pursues are counseling, psychotherapeutic approaches like CBT, relaxation therapy, mindfulness, positive psychology and more. She is also a certified Neuro-Linguistic Practitioner with certification from Dr Richard Brandler, one of the pioneers of the Neurolinguistic Programming approach to psychology.

Dr Zirak Marker is a renowned Child, Adolescent & Family Psychiatrist and psychotherapist. He has over 19 years of clinical experience with educational psychology and guiding children with learning disabilities, developmental delays, autism and emotional, behavioural or psychological problems. He is currently the Medical Director of The Aditya Birla Integrated School. Dr Marker is Advisor and Senior Psychiatrist with Mpower, a holistic centre with a multi-disciplinary team of professionals providing services and therapeutic interventions for children, young people and their families with ‘mental health concerns’ and ‘neuro-developmental disorders’. He has been a consultant at Saifee Hospital and has had previous attachments to the Breach Candy Hospital, St. Elizabeth's Hospital and Childrens Hospital. Dr. Marker set up one of the countries first inclusive schools for children with learning disabilities in 2004 which he ran successfully for almost a decade. He is the author of two books, 'Parenting in the age of Anxiety' and ‘Conversations That Matter'. In 2011 the Governor of Maharashtra felicitated Dr Marker for his contribution towards Mental Health initiatives.

Aparna Piramal Raje is a writer, columnist, speaker, educator, and author of the recently released, Chemical Khichdi: How I Hacked My Mental Health, a book on her experiences of living with a serious mental health condition for the last two decades. Her column, Head Office, in the Mint newspaper, looks at leadership through the lens of workspaces and workstyles. Over 100 CEOs have been featured in Head Office. The column led to her first book, Working Out of the Box: 40 stories of leading CEOs. She has also previously contributed to the UK’s Financial Times Weekend, a leading global newspaper. She is a visiting faculty member at the Anant National University in Ahmedabad, and former CEO of her family’s office furniture business.