Surviving the Surge: How Should India Navigate Through the Second Wave of COVID-19? | Asia Society Skip to main content

Surviving the Surge: How Should India Navigate Through the Second Wave of COVID-19? 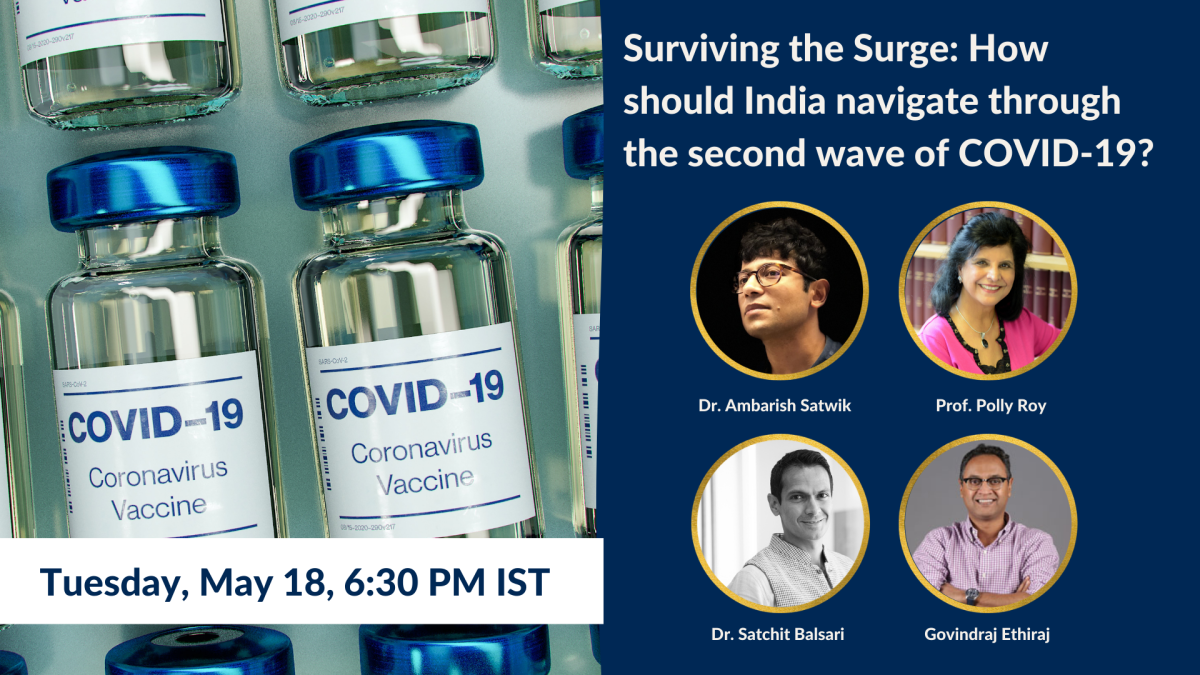 On 30th April 2021, India became the first country to report over 4,00,000 infections in a single day. Particularly concerning in India has been the fact that, since mid-March, the number of fresh cases have been consistently higher than the number of recoveries. The overburdened healthcare system continues to face a shortage of oxygen supply, hospital beds and combative medicines. With more than 20 million active cases, the immediate priority that the country has on its hand is to stop the deaths and curtail the spread of infection. According to the WHO, the Indian strain has been found in more than 17 countries so far. The science behind vaccine mutations is a vast subject and requires in depth research and institutional support. How does one make sense of this sophisticated scientific data since it is impacting our lives so severely?

While the last few weeks have been both challenging and overwhelming, it has been heartening to witness acts of solidarity in these times of crisis. Various non-profit organisations, civil-society groups, digital start-ups and corporate organisations have come forward to plug the gaps in the country's healthcare service delivery. Their critical help in mobilising essential medical supplies and co-ordinating relief campaigns has been timely and crucial. By early March 2021, India had reached out to over 90 countries by providing them vaccine supplies. Today, as India faces vaccine shortages and battles a fierce second wave, international support in the form of medical aid and emergency healthcare supplies has been reassuring. This global support, received during a critical time, reiterates the message of global interdependency and collective action.

According to an April 2021 report published by the Lancet COVID-19 Commission India Task Force, in order to contain further transmission and improve service delivery, the healthcare system in India will need to scale the national vaccination drive; improve testing, tracing and safety protocols. A constructive engagement, consultation and co-ordination between the covid task force, medical experts and political leadership at the state and centre level is crucial. India seems to have taken some initial steps in this direction and as an immediate course correction, healthcare authorities have ramped up medical infrastructure. The country has permitted the rollout of foreign vaccines while opening up the vaccination drive for individuals above the age of 18. However, will these measures prove adequate in the next few months? What is the strategic framework that India needs to adapt to handle both the current surge and future community transmission? Will factors like vaccines and herd immunity reduce the impact of the inevitable third wave that India will witness? And finally, are our healthcare and frontline workers mentally and emotionally equipped to continue to battle this pandemic?

Dr. Ambarish Satwik is a Delhi-based vascular and endovascular surgeon and writer. He is Director of the Vascular Cath Lab at Sir Ganga Ram hospital and Professor of Vascular Surgery, GRIPMER. Dr. Satwik is the author of the critically acclaimed novel Perineum: Nether Parts of the Empire. The book has often been introduced as a rogue and deviant (fictive) sexual history of the British Raj. His columns, miscellanies and opinion pieces on a variety of subjects have been published in India Today, Outlook, Open, Tehelka, Time Out and Hindu Business Line, amongst others.

Polly Roy is Professor of Virology at the London School of Hygiene and Tropical Medicine specialising in molecular biology of RNA viruses, using Bluetongue virus as a model, which causes significant agricultural losses. She is the leading exponent of the structure, genetic organisation and immunology of double-stranded RNA viruses with segmented genomes. Roy has worked on several continents, from her formal training in India to postgraduate, postdoctoral and early career development in the USA and most recently as a Wellcome senior investigator in the UK.

Dr. Satchit Balsari is Assistant Professor in emergency medicine at Harvard Medical School and Beth Israel Deaconess Medical Center, and in Global Health and Population, at the Harvard TH Chan School of Public Health. He is faculty at the Harvard FXB Center for Health and Human Rights, where his research has contributed to advocacy on behalf of vulnerable populations affected by disasters and humanitarian crises.  Until March 2017, he served as chief of the Global Emergency Medicine Division at Weill Cornell Medical College/NewYork-Presbyterian Hospital.

Govindraj Ethiraj is a television and print journalist who has reported and written on Indian business for over 25 years. He is a media executive and entrepreneur whose public interest journalism ventures are safeguarding the transparency, accuracy, and integrity of news in specific and the internet in general in India and world-wide. Most recently, he founded BOOM, an independent journalism initiative that fights misinformation and explains issues with the larger objective of making the internet safer. He also founded the award-winning IndiaSpend, a public interest journalism outfit which uses data to write and syndicate stories in areas like health, education, environment and FactChecker which monitors media, politicians and other figures for accuracy.