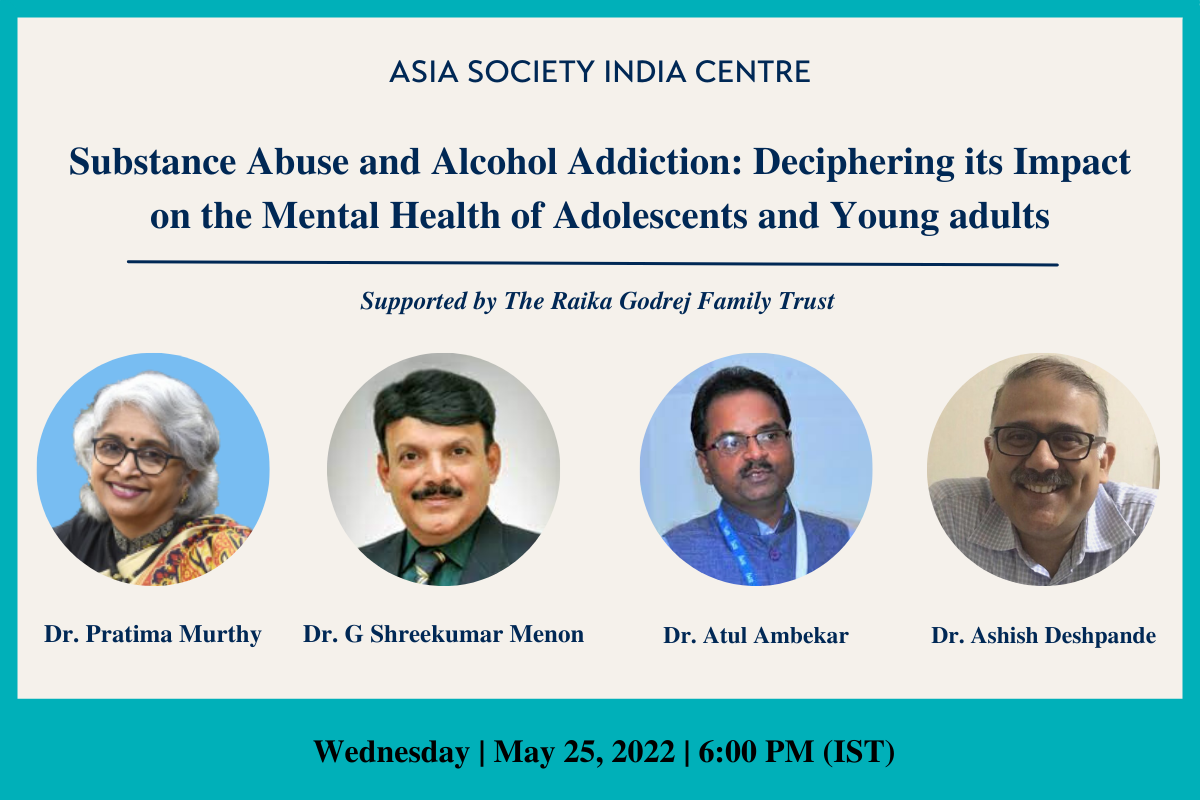 Substance abuse and alcohol addiction are complex issues that are increasingly gaining the attention of policymakers, health workers, law enforcement agencies and society as a whole. Social pressures, lifestyle issues, chronic pain, family history of addiction, biological factors, mental illness and other psychological conditions often lead to the usage of illicit substances. While there are contrary arguments on whether drug usage must be criminalized or not, one cannot deny its detrimental impact on individuals and the society at large. Hence, timely intervention and proper treatment are crucial.

According to the report titled, ’Magnitude of Substance Use in India’, prepared by the National Drug Dependence Treatment Centre (NDDTC), All India Institute of Medical Sciences (AIIMS), for the Ministry of Social Justice and Empowerment, Government of India, 160 million people (14.6% of total population) between the ages of 10 and 75 years consume alcohol, of which 5.2% are alcohol dependent. Around 7.2 million people are addicted to cannabis and 6 million to opioids. 1.7% of children and adolescents are inhalant users as compared to 0.58% of adults. Nearly 1.8 million children need help for inhalant use. These numbers are estimated to have grown after the pandemic. Also, nearly one in five alcohol users suffer from dependence and need urgent treatment. The report also states that “Protecting children from the widespread prevalence of substance abuse is one of the biggest policy challenges being faced by India”.

The degrees of consumption vary across gender and this needs to be factored in when treatment mechanisms and recovery efforts are being devised. Another facet to understanding drug abuse is demographics and the age of the user. The World Drug report 2021 by the United Nations Office on Drugs and Crime (UNODC) has recognized the widespread use of drugs amongst children during the pandemic. It reads, “Post-pandemic investment needs to prioritize scientific, evidence-based prevention of drug use and other risky behaviours, with a special focus on the development of life skills in children and young people, parenting and family skills, and mental health services.”

Other than the long-term health risks and threat to life, substance use is acknowledged to make the users vulnerable to other mishaps — accidents, fights, unsafe sex and overdose if it is not kept under check. This holds true, especially for adolescents and young adults, who run the risk of damaging their long-term mental, emotional and psycho-social development. Along with definitive treatments, there is a need to create institutional support for addicts, both at the urban and rural levels. Also, pre-emptive actions by law enforcement along with other wings of the government can ensure that drugs are not easily accessible. Article 33 of the United Nations Convention on the Rights of the Child (CRC) is an important international legal instrument that obligates states to protect children and young adults from using and dealing with illicit drugs.

What are the reasons for the sharp rise in the consumption of drugs by adolescents and young adults in India? How effectively is the government curbing the supply of drugs and other
illegally consumed materials? How do we provide institutional support and rehabilitation to young adults suffering from addiction in smaller cities and rural areas?

Join us for a conversation with Director of the National Institute of Mental Health and Neurosciences (NIMHANS) Dr. Pratima Murthy, Retired IRS officer of the 1978 Batch, Customs & Excise Dr. G. Shreekumar Menon, Professor at National Drug Dependence Treatment Centre (NDDTC), AIIMS, New Delhi Dr. Atul Ambekar,  and Mumbai based Consultant Psychiatrist Dr. Ashish Deshpande, as we discuss substance abuse and alcohol addiction and its correlation with mental health, especially amongst adolescents and young adults. The panel will explore the causes of addiction, the issue of access to illicit drugs, the use of traditional pills, medical and behavioral treatment and the institutional support frameworks available in urban areas as well as in smaller cities and rural towns.

Dr. Pratima Murthy is presently Director and formerly Head of the Department of Psychiatry at the National Institute of Mental Health and Neurosciences (NIMHANS). She has been instrumental in the successful development of state-of-the-art Centre for Addiction Medicine at NIMHANS. She has served as a consultant to prominent international agencies such as the United Nations Office on Drugs and Crime (UNODC), the International Labour Organisation (ILO) and the World Health Organisation (WHO). Dr Pratima is also recognised for her contribution in improving care for persons with mental illness through her work with the National Human Rights Commission on quality assurance in mental health care both in institutions and in the community. In recognition of her research and academic excellence, Dr Pratima has received numerous awards and honours including the prestigious Dr Raja Ramanna State Award by the Government of Karnataka and the Lifetime Achievement Award from Rotary. Recently, she was honoured with the WHO Regional Director’s Special Recognition Award on ‘World No Tobacco Day 2021’ for her remarkable service in tobacco control. A prolific author, she has more than 300 research publications in various international indexed journals and scientific books to her credit.

Dr. G. Shreekumar Menon belongs to the 1978 Batch of the Indian Revenue Service, Customs & Excise. He is a Fellow, at James Martin Centre for Non Proliferation Studies, San Francisco, USA, and the University of Georgia, USA on Commodity Identification (Dual-Use Items) with reference to components and parts used in the nuclear and missile industry. He is presently a Consultant for the United Nations Office for Drugs and Crimes (UNODC). Dr Menon has served as Director-General of The National Academy of Customs, Indirect Taxes and Narcotics, Government of India, New Delhi (NCR). He has also served as Registrar of Yenepoya University, Mangalore. He established the Centre for Narcotics & Psychotropic Substances at the Manipal Academy of Higher Education, and even served as the first Head of this Centre, in Kasturba Medical College, Manipal. Apart from his active work in India, he has delivered several lectures at International Customs Academies such as the Russian Customs Academy and others.

Dr. Atul Ambekar is Professor at National Drug Dependence Treatment Centre (NDDTC), All India Institute of Medical Sciences, New Delhi. He has been a member of many international and expert bodies in the field of drug addiction including the Expert Advisory Panel on Drug Dependence (World Health Organization, Geneva), Strategic Advisory Group (IDU and HIV) (United Nations), National Consultative Committee on Drug Demand Reduction and Rehabilitation (NCCDDR) (Ministry of Social Justice and Empowerment, Govt. of India). He has published a number of research papers, practice guidelines and training manuals in the field of addiction psychiatry. As the principal investigator, he has led the National Survey on Extent and Pattern of Substance Use in India, one of the largest epidemiological studies of substance use in the world. Currently, he is a member of the Board of Directors of the International Society of Addiction Medicine (ISAM) and the ISAM Regional Council representative for Asia.

Dr. Ashish Deshpande is a Psychiatrist practicing in Mumbai. A Life Fellow of the Indian Psychiatric Society, he was the President of Bombay Psychiatric Society (2015-16) and has been associated with the Directorate of Mental Health, State Government of Maharashtra, in various committees. He is a recipient of the Bombay Community Public Trust Scholarship and Hinduja Foundation Scholarship amongst others. He has been appointed as a Coordinator and Member of the National Scientific Committee for Addiction Prevention for DeaddictionConnect- a nationwide substance use prevention program in collaboration with the National Institute of Health & Family Welfare (NIHFW). He was selected for the post of Director, Mental Health Services, SAMARPAN. He is an invited expert by the State Mental Health Authority of Maharashtra for developing the Mental Health Helpline content on substance use, suicide & domestic violence and was also appointed on the committee to lay down the norms for therapeutic communities in the State of Maharashtra.