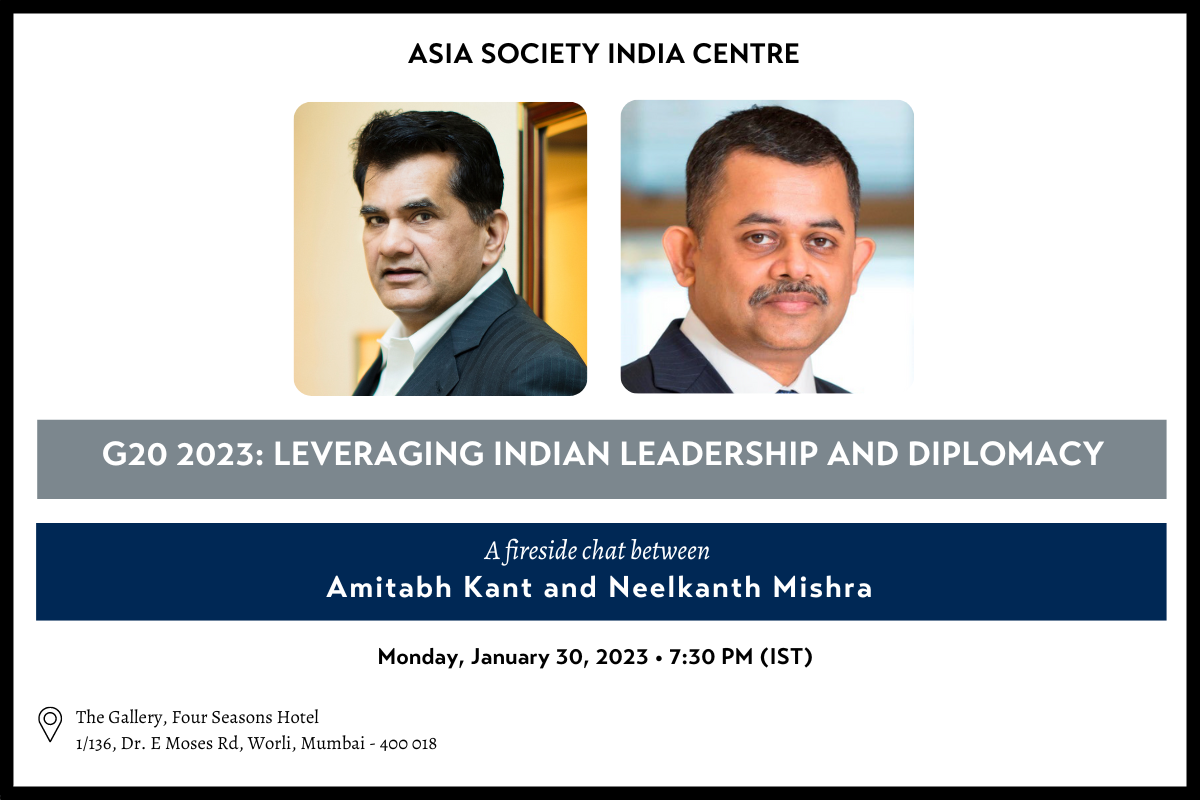 On December 1, 2022, India took over the Presidency of the G20 (formally known as the Group of 20) for the first time since it was founded in 1999 after the Asian Financial Crisis. This intergovernmental forum was developed to allow finance ministers and central bank governors to discuss global economic issues and any potential financial crises that may affect the global economy. Over the years, the annual G20 Summit has been upgraded to now include a ‘Head of State’ Summit, where leaders of member countries convene to discuss international cooperation in a series of joint and bilateral conferences. India’s leadership of the G20 comes at a crucial juncture, given the ongoing effects of the Ukraine-Russia war, a deepening global energy crisis, economic slowdown, a resurging COVID risk, and the rapidly-increasing consequences of global warming.

Recognizing this, India has launched an ambitious year-round series of G20 discussions and meetings centered around the theme “Vasudhaiva Kutumbakam” (“One Earth · One Family · One Future”). This encapsulates a universalist vision and goal for India’s Presidency: to strive for just and equitable progress for all people in the world. Some of the key priorities outlined by the government include inclusive, equitable, and sustainable growth; LiFE (lifestyle for the environment); women’s empowerment, digital public infrastructure, and technology-enabled development in health; education, climate financing & the circular economy. Additionally, agriculture, skill mapping, culture and tourism, global food security, energy security, disaster risk reduction, development co-operation, fight against economic crimes & multilateral reforms are also areas of focus.

But how does the G20 theme translate into a definable agenda and set of goals? What does it mean for India’s business and industrial community? How are Indian businesses working towards creating sustainable practices, and how can they contribute to the G20 agenda? How should India leverage this opportunity to better its own interests and those of the developing world?

Mr. Amitabh Kant is currently the G20 Sherpa, Govt. of India. He is the ex-CEO of the NITI Aayog. Until May 2016, he served as Secretary, the Department of Industrial Policy and Promotion (DIPP), Government of India. He was responsible for the formulation and implementation of industrial policy and strategies for industrial development, formulation of foreign direct investment (FDI) policy and promotion and facilitation of FDI, and policies related to intellectual property rights (IPRs) in the fields of patents, trademarks, industrial design, and geographical indications. He has also served as Chairman of the Delhi-Mumbai Industrial Corridor Development Corporation (DMICDC) and the National Productivity Council. A member of the Indian Administrative Service, he is the author of two books - Incredible India 2.0 and Branding India - An Incredible Story. He has also edited Path Ahead - Transformative Ideas for India. A key driver of the "Incredible India", Make in India, and "God's Own Country" initiatives, Mr. Kant completed his BA (Hons) in Economics from St Stephen's College, Delhi University, and his MA, as a Chevening Scholar from the Jawaharlal Nehru University.

Mr. Neelkanth Mishra is the Co-head of Asia Pacific Strategy and Head of India Securities Research at Credit Suisse. He has been rated among the best analysts in India by the Institutional Investor and Asiamoney polls. Mr. Mishra is part of the Economic Advisory Council to the Prime Minister of India and has been an advisor to several government committees, such as the 15th Finance Commission and the India Semiconductor Mission. He also advises businesses and has been part of the Economic Affairs Council of the Confederation of Indian Industry for the past few years. Mr. Mishra has worked in Metals & Mining, Indian Pharmaceuticals, Taiwan IC design, semiconductor foundries, and Asian tech strategy research, based out of Mumbai, Singapore, and Taipei. Prior to joining Credit Suisse, he was a Senior Technical Architect with Infosys Technologies. He has also worked with Hindustan Lever Limited and has been an entrepreneur. He is a gold medalist from the Indian Institute of Technology (IIT), Kanpur, graduating in computer science and engineering, and a Distinguished Alumnus Award winner. He was ranked fourth in the prestigious entrance exam to the IITs.

This programme is supported by: