Combating the Second Wave: Are Vaccines a Way Out of the Gloom? | Asia Society Skip to main content

Combating the Second Wave: Are Vaccines a Way Out of the Gloom? 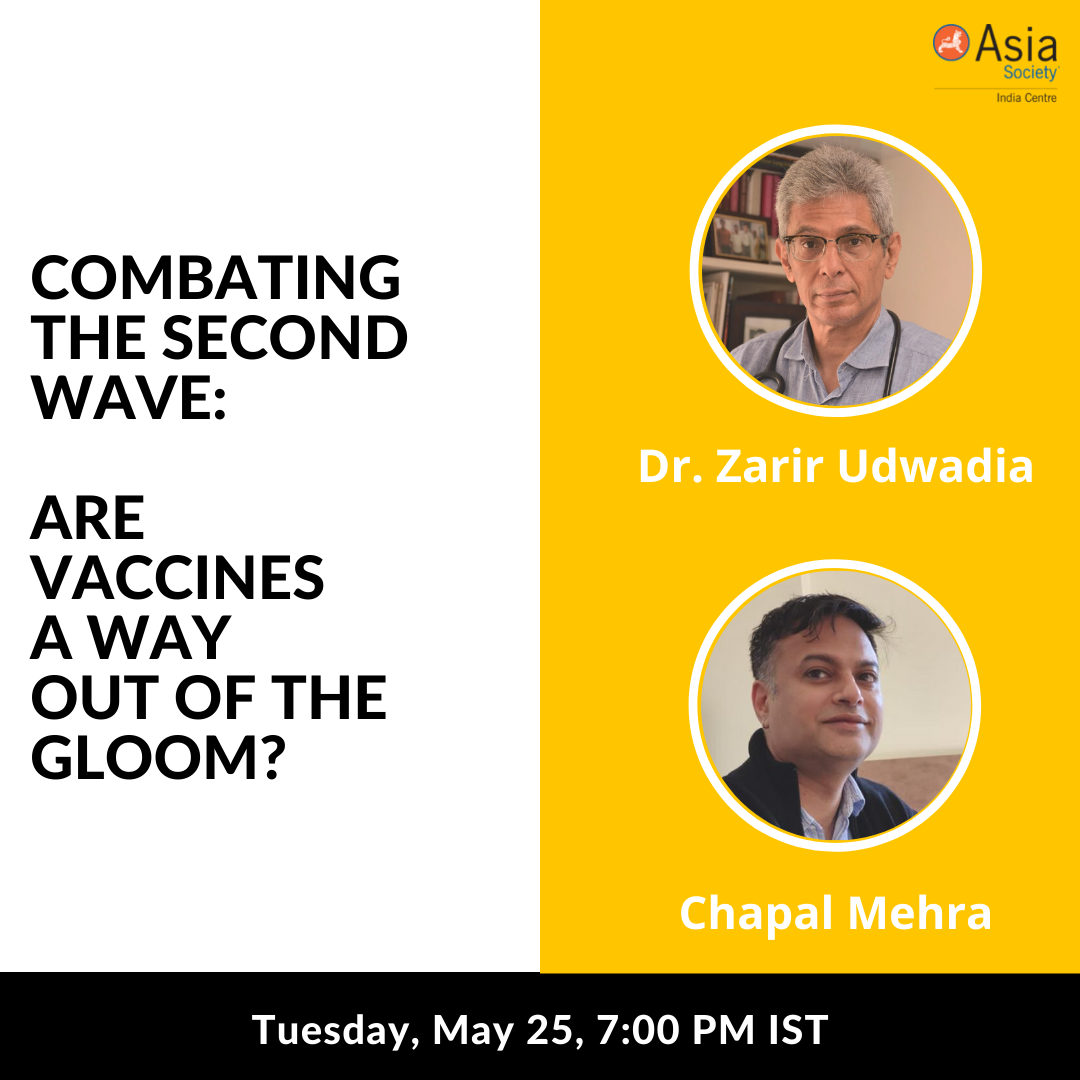 India, the world’s largest producer of vaccines, launched its nationwide vaccination drive early this year, setting a target of vaccinating over 30 crore citizens by July 2021. This was done in addition to the very gracious vaccine diplomatic exercise that extended help to nations that really needed it. Struggling with an intense second wave of transmissions, India has intensified its national vaccination drive, allowing the rollout of foreign vaccines, like the Russian Sputnik, and also widening the demographic pool by allowing citizens above the age of 18 years to get inoculated. But the vaccine factory of the world faces an acute shortage today, that has been caused by an amalgamation of opaque factors.

In addition to the shortage, there is an intense plague of misinformation about vaccination and cures for the virus that has spread through predominantly social media channels. Viruses by nature mutate and change variants. According to scientific data, some become less dangerous while some more infectious. But when one finds oneself living in the second most populated country, with an under-resourced public healthcare system and facing a devastating second wave, what are the options? Is vaccination the best way to reduce the intensity and spread? How effective are the current vaccines likely to be against the new variants? What are the provisional solutions for people and health professionals as they await vaccinations? What is the current state of play in our hospitals? How can we help healthcare workers to address this current crisis efficiently?

Join us for a discussion with reputed pulmonologist Dr. Zarir Udwadia and public health specialist Chapal Mehra as they provide an evaluation of vaccines, India’s vaccination drive and share key learnings on ways to mitigate the second wave in the country. The discussion will also shed light on global vaccination performance and its success in reducing COVID-19 positivity, developing herd immunity and issues of availability, hesitancy and inequity in vaccinations.

Dr. Zarir Udwadia is part of the nine-member Maharashtra state task force set up in early April 2021 with the express mandate to find ways to cut down Mumbai city’s fatality rate and evolve a treatment protocol for critical cases.

* Please note - This event will only be live-streamed on Zoom and Facebook. It will not be recorded for future viewing. Viewers can submit questions on both platforms during the live stream.

Dr Zarir F Udwadia is a consultant chest physician and MD, DNB, FCCP (USA) and FRCP (London) attached to the Hinduja Hospital, Breach Candy and Parsee General Hospitals. He has struck the unique balance of combining a busy clinical practice with internationally acclaimed medical research. He sees over 10,000 patients annually in his extremely busy clinics. He has over 190 PubMed indexed medical research publications and was listed amongst the top 2% of respiratory medicine researchers worldwide in the field of respiratory medicine in a Stanford University publication. He has been advisor to the WHO, Geneva and helped formulate TB and MDR-TB guidelines. In 2017 Open Magazine nominated him as one of their twenty-five top minds for his impact on public health. He had given two TED talks, one on Drug Resistant Tuberculosis and the other on COVID-19, both of which have been widely viewed. He is on the Core Committee of doctors elected by the Supreme Court to form a National Task Force set up to address critical nationwide COVID-19 issues like oxygen, drugs and vaccinations

Chapal Mehra is a public health specialist, writer and commentator. He  works on issues of health, development, gender and human rights. He has worked extensively with communities, the media and civil society to advocate on key issues in health, particularly infectious diseases, mental health, addressing patient and civil society demands, improving access to early diagnosis and appropriate treatment and providing economic and social support to patients and vulnerable communities. He is also an independent commentator and writes for The Hindu, Huffington Post and Indian Express. He is the author of The Ticking Time Bomb and Voices from TB.