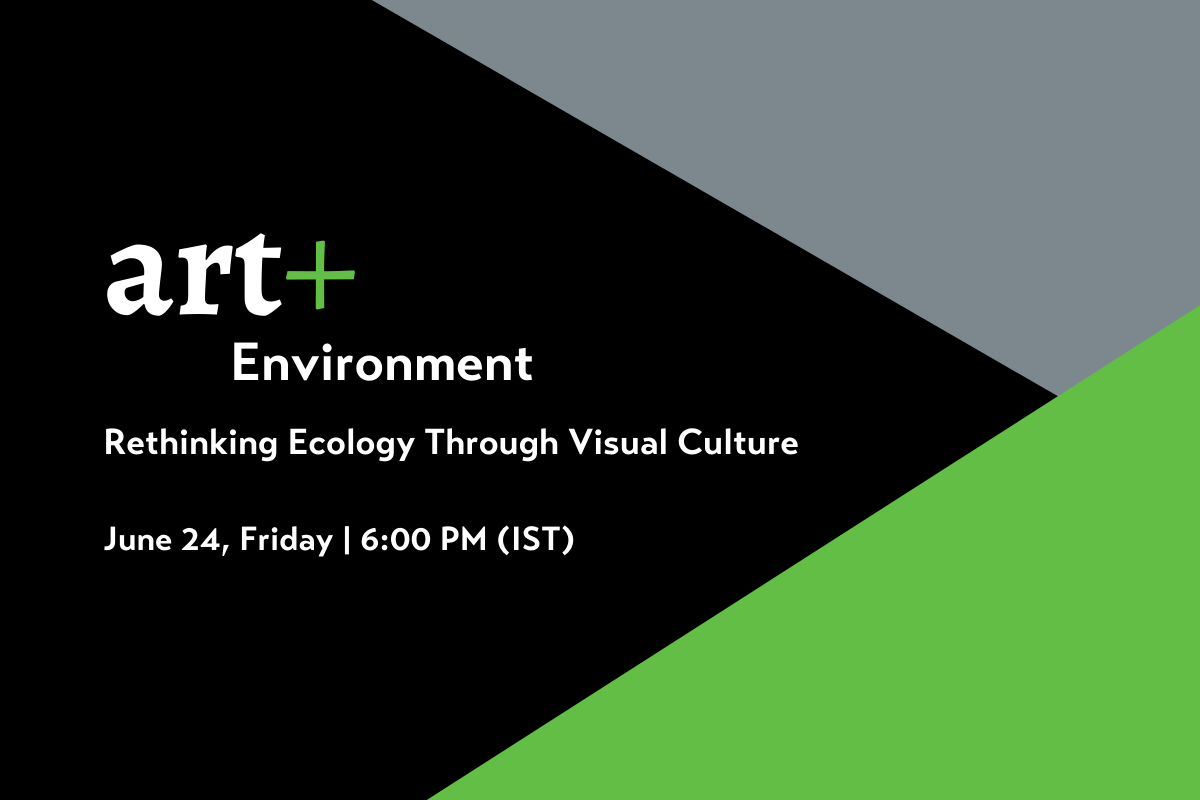 “Climate change, environmental destruction, species extinctions, now increasingly common terms, are symptoms of a deeper planetary emergency. At its root lies an historical alienation from nature… We need to urgently find ways to embrace humbler, more inclusive existences with the more-than-human world”, wrote curator, artist, writer and environmental campaigner Ravi Agarwal in the concept note for a recent exhibition he curated at the Goethe Institut/Max Mueller Bhavan in Mumbai, India. Titled New Natures: A Terrible Beauty is Born, the exhibition invited artists to “rethink the world as we know it today”.

This simple provocation is at the core of artistic and design practice around the environmental urgencies we face globally. Artist Vibha Galhotra presents a multimedia, multi-sensory practice that contends with the interdependent and often tumultuous relationship between human beings and the ecosystem. Her work “crosses the dimensions of art, ecology, economy, science, spirituality, and activism”, compelling audiences to question the social, cultural and political convictions that frame the way we live, work and co-habitate. The power of art in enabling this questioning and questions around what it means to be an artist are the basis of Galhotra’s practice.

Architect and scholar Dilip Da Cunha combines art, design, research, pedagogy and activism to propose a new imagination around land, water, space, and human intervention. He also contends with the idea of “separateness” in ecological discourse, though somewhat differently than Agarwal. Ocean of Wetness, for instance, is a design platform he co-conceptualised and initiated with the late Anuradha Mathur in 2017, that calls for the need to move away from set vocabularies of land and water and understand better the man-made partitions that keep them separate from one another. “When we experience ‘water’ on the other side of a line that allegedly separates it from ‘land’, we know it to be by design, design that articulates a surface for habitation”, reads the opening paragraph of the concept note. Climate change is threatening this very surface, “calling into question the act of separation that brought it into being”.

The considerations of environmental change as it intersects with history, society and geopolitics calls for a fundamental rethinking of what we know of the natural world and its precarious future, and the expansive field of visual culture offers an alternative and multidisciplinary framework within which to engage with these questions.

Join us for a moderated conversation between Dilip Da Cunha, Ravi Agarwal and Vibha Galhotra as they explore how art, architecture and design represent, respond to or engage with environmental concerns within the specific social and ecological context(s) of India. Taking off from the panelists’ common commitment to the politics of water, the panel aims to open up broader questions of enquiry around the complex relationship between human beings, the natural world, and the future of the planet. The webinar is moderated by Ruth Pollard, columnist and journalist with Bloomberg Opinion.

This is the second session in the second season of Art+, developed in partnership with Bloomberg: a series of virtual conversations that critically engage with unique perspectives on contemporary art from South Asia, featuring artists, curators, art historians, and cultural practitioners from across the world. The second season will look at the relationship between art, gender, education and environment.

Dilip da Cunha is an architect and planner based in Philadelphia and Bangalore, and Adjunct Professor at the GSAPP, Columbia University. He is author with Anuradha Mathur of Mississippi Floods: Designing a Shifting Landscape (2001); Deccan Traverses: The Making of Bangalore’s Terrain (2006); Soak: Mumbai in an Estuary (2009); and editor of Design in the Terrain of Water (2014). In 2019, his book, The Invention of Rivers: Alexander’s Eye and Ganga’s Descent, was published by University of Pennsylvania Press. It received the 2020 ASLA Honor award and the J.B. Jackson Book Prize.

In 2017, Mathur and Da Cunha initiated a design platform called Ocean of Wetness directed to imaging and imagining habitation in ubiquitous wetness rather than on a land-water surface. In 2017, they were awarded a Pew Fellowship Grant and in 2021, the Mercedes T. Bass Landscape Architects in Residence Fellowship at the American Academy in Rome. In 2020 da Cunha was awarded a Guggenheim Fellowship for Ocean of Rain, a book and exhibition that seeds a transition in the language of place from a ‘geographic surface’ (India) to an ‘ocean of rain’ (Sindhu).

Ravi Agarwal is an interdisciplinary artist, environmental campaigner, writer, and curator. His work bridges the divide between art and activism, to politicize the entangled questions of nature and its futures. Using photography, video, text, and installation he poses questions about ecology and society, culture, urbanity, etc. He has been shown widely, including at, the Biennials of Havana (2019) Yinchuan (2018), Kochi (2016), Sharjah (2013), dOCUMENTA XI (2002), etc. He has curated large public art projects such as the Yamuna-Elbe, twin city project (2011), and Embrace our Rivers, an Indo- European project (2018), and was the photography curator for the Serendipity Arts Festival 2018 and 2019. He recently curated New Natures, A terrible beauty is born at the Goethe Institute and CSMVS Museum, Mumbai, and the exhibition curated by him, Imagined Documents will be shown at the Les Recontres d' Arles 2022. He has edited books (The Crisis of Climate Change, Routledge, 2021; Embrace Our Rivers – Kerber, 2017), journals (Marg - Art and Ecology issue - April 2020, IIC journalSpring 2020), and publishes regularly on art and sustainability (Alien Waters in The Routledge Companion to Contemporary Art, Visual Culture, and Climate Change, 2021). His works are in several private and public collections. Ravi is also the founder-director of the environmental NGO Toxics Link and recipient of the UN Award for Chemical Safety and the Ashoka Fellowship and is a Communications Engineer and MBA by training.

Vibha Galhotra (​​b. 1978, Chandigarh, India; lives and works in Delhi, India) is conceptual artist whose multimedia oeuvre―including sculptures, installations, photographs, videos, site-specific work, and public art interventions―addresses the shifting topography of a world radically transformed by climate change, consumerism, capitalism, and globalization. Propelled by the constant negotiation between human beings and their ecosystem, Galhotra’s practice utilizes intensive research and intuitive imagination to investigate the social, economic, and political implications of human activity on the environment. She draws from varied disciplines, including the fine arts, ecology, economics, science, spirituality, and political activism to inform a poetic visual response to the environmental changes and restructuring of culture, society, and geography occurring in today’s world.

Galhotra’s work is in numerous public and private collections and she is recipient of numerous awards and fellowships including, among others, the Asia Arts Future – Asia Arts Game Changer Awards India (2019); Asian Cultural Council Fellow (2017); the Rockefeller Foundation Bellagio residency (2016); YFLO Women Achiever of the Year Award (2015); and more.

Ruth Pollard is a columnist and editor with Bloomberg Opinion. Previously, she was South and Southeast Asia Government team leader at Bloomberg News and before that, Ruth was the Middle East Correspondent for the Sydney Morning Herald. She focuses on foreign policy, defense and security.