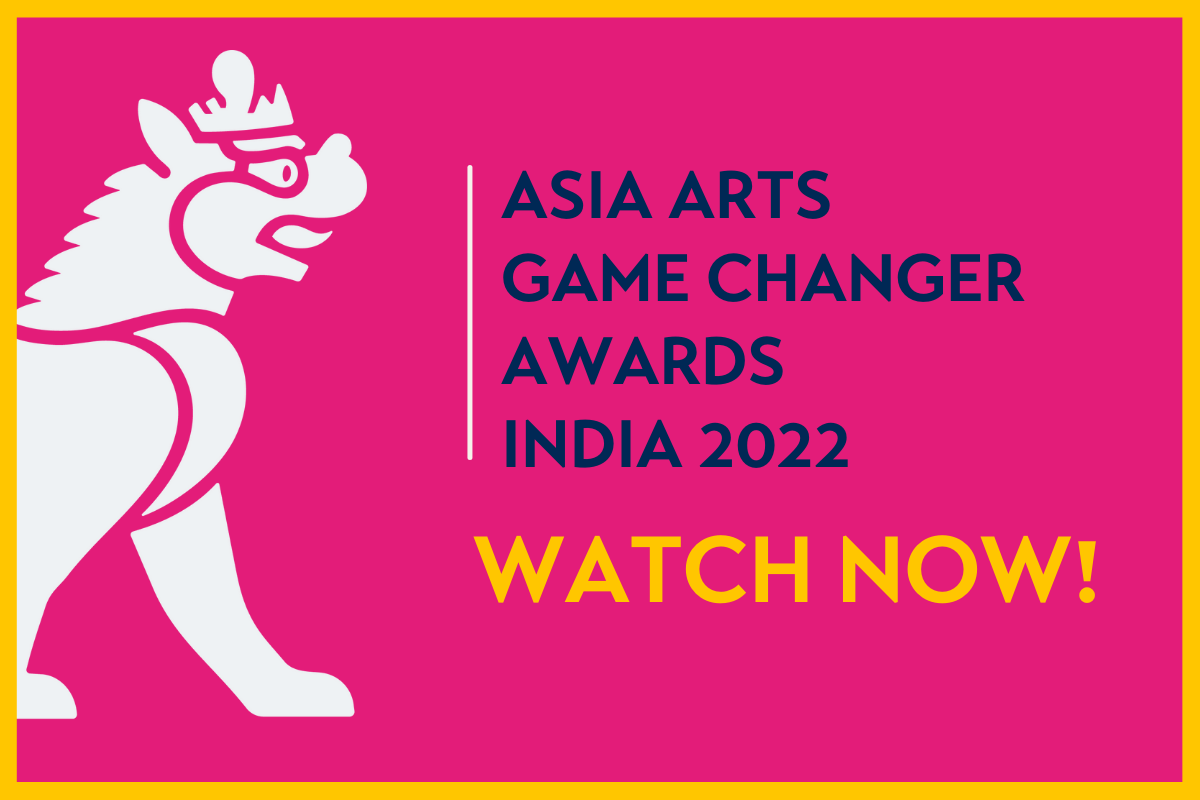 For more than thirty years, Asia Society has been a pioneer in identifying and fostering contemporary Asian artists, and engaging new audiences with their work. The Asia Arts Game Changer Awards India is an annual marquee convening of Asia Society that honors visionaries across the field of art and culture. The Awards pay tribute to artists and arts professionals who have made a significant contribution to the development of modern and contemporary art in Asia and who inspire a deeper empathy and understanding of the world through their work.

This year, the gala supported by Bloomberg, will be hosted virtually as a public programme. The ceremony will see the coming together of major art collectors, artists, gallerists, curators and dignitaries from across South Asia and the South Asian diaspora, as well as Asia Society trustees and patrons.

To join us for an evening of with renowned performers, artists and patrons, register here!

All details about the event can be found on our digital event brochure here!

This year, we took a creative journey from Mumbai to Baroda, with a grand finale in Agra, to bring to you our 2022 Asia Society collectible: a beautifully designed, limited-edition marble inlay work. Featuring an artistic composition by the eminent Jyoti Bhatt and masterfully translated by Rooshad Shroff, this marble inlay work is a myriad of colours pieced together by artisans who have been keepers of the craft for generations. It is a spectacular piece that brings together the magic of art, craft and design.

You can know more about the collectible here!

Himmat Shah was born in 1933, Lothal, Gujarat, an important site of the Indus Valley civilization. He moved to Bhavnagar as a young boy and studied at Gharshala, a school affiliated to Dakshinamurti, the intellectual and cultural centre of the nationalist renaissance in Gujarat. Before joining the J.J. School of Art, Bombay in the early 1950s, Shah was initiated into practicing art by artist-educator Jagubhai Shah.  At the Faculty of Fine Arts, Baroda, he learnt avidly from Prof. N. S. Bendre and K.G. Subramanyan, as part of the first batch of students in 1956-60. While still a student, Shah had received National Award for Painting twice, in 1959 and 1962. He became one of the members of the short-lived, critically acclaimed, Group 1890, founded by J. Swaminathan.  Shah’s first solo exhibition was held at the Triveni Gallery, New Delhi in 1964. He received a French Government scholarship and went on to study etching at Atelier 17 under the mentorship of Krishna Reddy in Paris in 1967. On his return, in 1971, Shah designed and executed monumental murals in brick, cement and concrete at St. Xavier's School Ahmedabad. A practice, he continued with relief in plaster through a series called ‘silver paintings’ followed by sculptures in terracotta and bronze. Subsequently Shah moved to Delhi, where at the Garhi studio he started experimenting with clays and slips developing a unique vocabulary in terracotta. His first sculpture exhibition was held at the Dhoomimal Art Gallery, New Delhi in 1979. His bronze sculptures from 2004-05, were cast at a foundry in London.  Shah’s iconic heads made in terracotta and bronze are  considered exceptional for their commanding forms and material rendering.

Himmat Shah has participated in numerous solo and group exhibitions in India and abroad. He was awarded the Kalidasa Samman by the Government of Madhya Pradesh in 2003. He received the Sahitya Kala Parishad Award, New Delhi, in 1988. His major retrospective ‘Himmat Shah: Hammer on the square - A Retrospective (1957-2015), was held at the Kiran Nadar Museum of Art (KNMA), New Delhi in 2016; followed by large scale exhibition ‘The euphoria of being: Himmat Shah continues on his journey across six decades’ at Jawahar Kala Kendra (JKK), Jaipur in 2018 and;  Under the vastness of the sky HIMMAT SHAH | A Retrospective / across six decades at the Bihar Museum, Patna in 2019, all three curated by Roobina Karode, Director and Chief curator KNMA.

The artist lives and works in Jaipur. 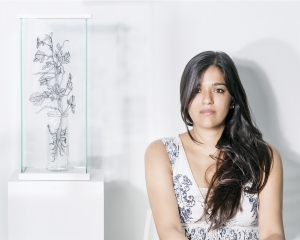 Her installations, illusion mappings, animations, paintings, threadwork and sculptures have been exhibited in group and solo presentations at Saatchi Gallery- London, Museum of Contemporary Art- Chicago, C24Gallery -New York, KNMA- Delhi, Kochi Biennale, Museum of Contemporary Art- Lyon, MAXXI Museum-Rome, Mattress Factory Museum of Contemporary Art- Pittsburgh, Van Harrison Gallery-New York,  Wilfrid Museum of Art – Israel, Kunsthaus Langenthal Switzerland, Queensland Gallery of Modern Art Australia among other museums and galleries. She is the first Indian artist to be commissioned by Hermès for their artist windows and is the recipient of several grants and awards including YFLO (FICCI), Zegna, Illinois Arts Council, Richard H. Driehaus. Her work has been on the cover of Arts Illustratedand featured in Art in America, Art Forum, Platform magazine, Take on Art, Chicago Tribune, Village Voice, Younger Than Jesus - the New Museum Catalogue among other journals.

Singh's immersive installations are an invitation into a slower rhythm of time.

Viewers are invited into worlds of shifting perceptions, fracturing illusions and fluid figure-ground relationships, to explore the bases of how we assign attention, construct meaning and perceive our realities within and without. Our everyday ‘givens’ are questioned as her work dissolves familiar forms and intimate memories into insubstantial mirages using perspective, eroding surfaces or gossamer, web-like skins of thread and lace.

Jasmine Nilani Joseph is a practising artist and recognizes herself as a thinker and critic. She was born in Jaffna in 1990 and moved to Vavuniya in 1995 because of the civil war. After finishing her school education in 2009, she returned to Jaffna to pursue her bachelor’s degree in Fine Arts at the University of Jaffna, completing it in 2015.

She has participated in many group exhibitions, Including human rights arts festival 2017, Colombo; Young Subcontinent, Serendipity Arts Festival 2017, Goa; Dhaka Art Summit 2018, Bangladesh; Colomboscope Arts Festival 2019, Colombo; Museum of Modern and contemporary Art Sri Lanka, 2019/2020; Manifesto for artists in a strong state 2020, Germany. And as an artist on the rise, she exhibits her works in galleries in Colombo and New Delhi since 2017. In 2019 she did her first solo exhibition at the Art Circle, University of Jaffna. As an artist-in-residence she had the open studio, at Pepper House in Kochi, organized by the Kochi Biennale foundation in 2020. Jasmine’s works have reached many private collections and has been published in international journals and PHAIDON’s Vitamin D3 Book. She is exhibiting her works in the 10th Asia Pacific Triennial, Queensland Art Gallery of Modern Art, Brisbane, Australia this year. She lives and works in Jaffna.

The evening will be graced by special musical performances by renowned Pakistani singer-songwriter and composer, Zeb Bangash. 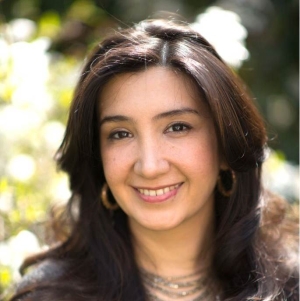 Zeb Bangash is the first Pakistani artist to serve as music director of an award- winning Bollywood film, Lipstick Under My Burkha (2016), that went on to receive 18 international film awards. Her performance of the song “Yar-e-Mann” for the soundtrack of the TV series Diyar-e-Dil in 2016 won the Lux Style Award and a HUM Award. Bangash has performed numerous times for the popular Pakistani TV shows Coke Studios and Pepsi Battle of the Bands.

Bangash’s reputation was first built through her critically-acclaimed duo with guitarist Haniya Aslam. She went on to collaborate with renowned klezmer clarinetist/ composer Michael Winograd and other leading Brooklyn- based musicians in the ensemble Sandaraa, bagging pestigious grants from Chamber Music America and the MAP Fund to compose and record music featuring the works of eminent Urdu poets from the subcontinent. Their first single, “Farz Karo”, released in 2018.

Bangash is a student of Ustaad Naseeruddin Saami, a master of the centuries-old Dehli Gharana. Bangash is working on a documentary recording of Ustaad Saami with GRAMMY-winning producer Ian Brennan. She has been profiled by international media such as the BBC, TIME, Asia Society, Filmfare Middle East, Rolling Stone India, NPR, The News International, The HINDU, Hindustan Times, DAWN, and many others.

Special thanks to our artist patrons, sponsors and supporters.