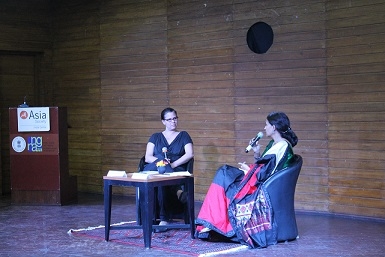 MUMBAI, November 2, 2015 – Asia Society in association with the Consulate General of Canada in Mumbai, presented to a houseful audience a special screening of Driving With Selvi an Eyesfull Production. The screening was followed by a poignant conversation between Elisa Paloschi, Director, Producer, Cinematographer and Smarinita Shetty, Director, Girls Alliance, Dasra.

Driving with Selvi’ follows the inspiring story of Selvi, South India’s first female taxi driver, as she takes control of both the steering wheel and her future during a courageous transformation from abused child bride to empowered working mother. We first meet 18-year-old Selvi at a girls’ shelter in 2004 – timid, soft-spoken, a fresh runaway from a violent child marriage and the victim of a life set against her. Over the 9 years of filming, we see a remarkable transformation as Selvi finds her voice and refuses to surrender to expectations.

Shetty began the conversation by placing Selvi’s story in the Indian context, with startling statistics of child marriage and domestic violence in India. Speaking about the beginnings of the filming process, Paloschi stated that she did not come to India with the intention of filming a documentary. She came across Selvi at a women’s shelter where she was volunteering, coming to realize that Selvi’s story was one, “that deserved to be told”. Path breaking Selvi was not only the first female taxi driver at the time of filming, but also one of the few women drivers on the road in Mysore. Initially reticent at the prospect of being filmed, Selvi warmed up to the idea as she believed that if her story could change the life of one girl, it was worth the portrayal. Driving With Selvi gears up to be screened in rural areas across India, sharing Selvi’s inspiring story with millions of men and women across the country.

This programme is part of our AsiaLens series, presenting an array of perspectives on the visual and performing arts of modern Asia, offering a vibrant and nuanced view across the continent. Previous events under this series include a special pre-release screening of 'Margarita with a Straw', a special pre-release screening of The Lunchbox, the India Premiere of 'Saving Face', and the India premiere of 'Fire In The Blood'.