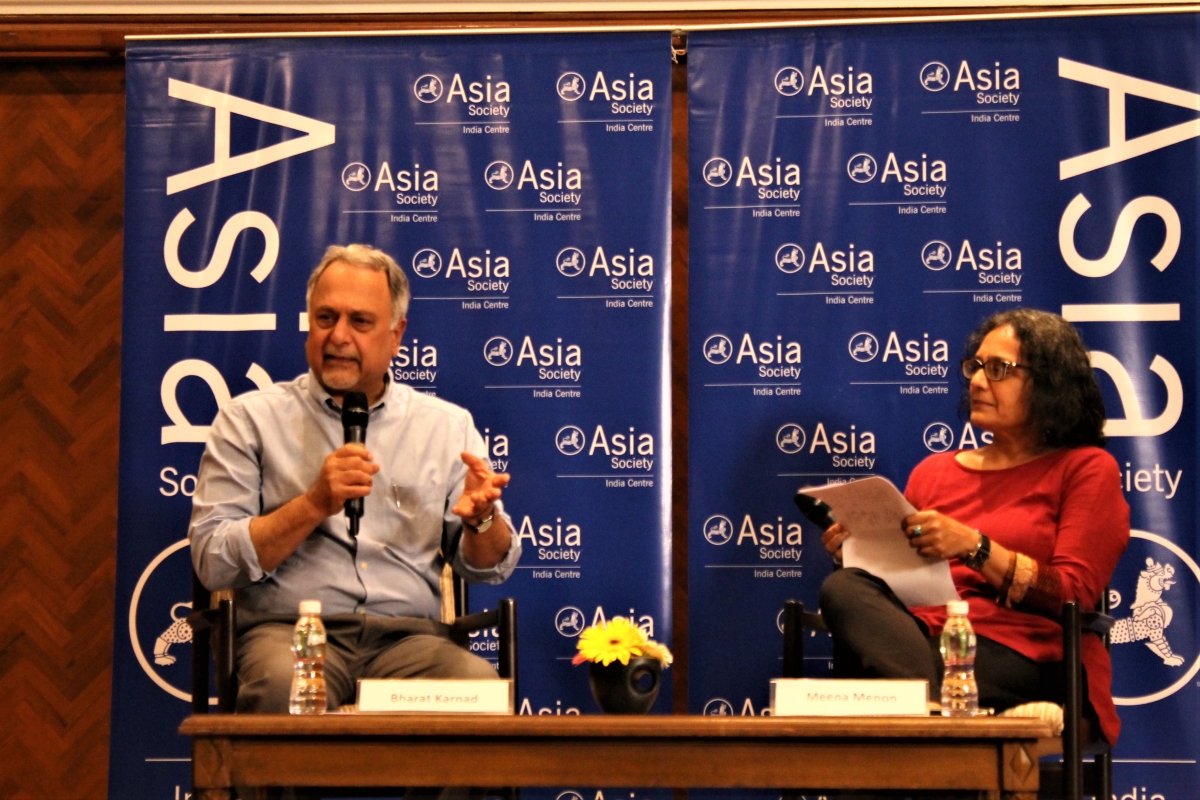 MUMBAI: On October 25, 2018, Asia Society India Centre hosted Bharat Karnad and Meena Menon at the Nehru Centre for a discussion on India’s foreign policy under the premiership of Narendra Modi based on Karnad’s new book ‘Staggering Forward: Narendra Modi and India's Global Ambition’.

In his address, Karnad’s remarks broadly encompassed Modi’s leadership, his policies and limitations. Modi’s leadership style is in line with a global pattern of ‘self-centered leadership systems’ as observed in the United States, Russia, China, Japan, Turkey, and now in, Brazil. His spectacular oration, his hierarchical and strictly organizational working style have admirers and critics alike. His policies are aspirational and his slogans are sensational. However, with regards to foreign policy Karnad expressed his disappointment saying Modi does not seem to be using the strategic position of peninsular India. His warm gestures to revive conviviality with the US would garner cold responses given the disregard of the Trump administration of all foreign powers. While commenting on ways in which India can assert itself globally, Karnad suggested regrouping within strategic regional and multilateral forums by sidelining proto-hegemons which limit the gains that can be made.

Menon began the discussion by asking about Modi’s use of religion in building his political narrative on Pakistan in India and its impact on foreign policy. Karnad said that by claiming Pakistan to be India’s top priority, Indian leadership is misjudging its adversaries. This flawed approach to foreign policy is not lost on the major foreign powers. In addressing security concerns, he recommended investments on strategic weapons systems that would be true deterrents instead of short-term, tactical weapons.

Menon then asked if he was optimistic about Modi’s victory in 2014 and if he observes any changes since. Karnad opined that his promises on big changes would require him to pursue radical solutions. There is no observable change in social, economic, political, foreign policy or national security issues. Russian concerns regarding the Indo-US security agreement are valid with access being granted to sensitive defense communication systems that would jeopardize interests of regional powers. He also pointed out that the strategic partnerships offered by US and Japan are qualitatively different. The Japanese offered India the finest aircrafts along with the algorithms and financial support, as opposed to the vintage aircrafts from 1960s already mastered by Pakistan offered by US as a strategic partnership deal. It is the political will to pursue the right offers that defines that path of foreign policy.

The discussion was concluded after Karnad addressed a few questions from the audience members.