Business Unusual: Startups and the Future of Entrepreneurship in India | Asia Society Skip to main content

Business Unusual: Startups and the Future of Entrepreneurship in India 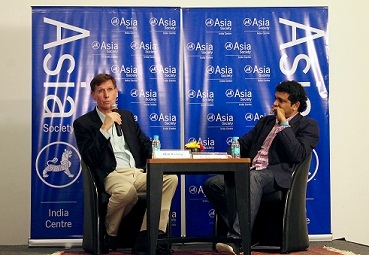 Mumbai, October 3rd, 2017: Asia Society India Centre hosted Alan Rosling, entrepreneur and former Executive Director of Tata Sons, and Karthik Reddy, Co-Founder and Managing Partner at Blume Ventures, for a discussion on the startup ecosystem and future of entrepreneurship in India. The discourse was influenced by Rosling’s book, ‘Boom Country? The New Wave of Indian Enterprise’.

Citing his deep-rooted ties to the Indian entrepreneurial space, Rosling candidly opined that while Indians have been visibly entrepreneurial around the world—notably as leaders of some of the largest businesses, this has not been the case in India. For a number of years after independence, the Indian entrepreneurial space struggled and ran into several difficulties. However, in the last 25 years, there has been a marked shift. According to Rosling, it is an interaction with the United States that brought about this shift in the spirit of entrepreneurship in India. In addition, four other factors have played a decisive role: Opportunities have increased; the government has undertaken reforms favourable to entrepreneurship; money is more accessible through angel and seed funding; social and cultural acceptance of business has increased. While these are encouraging developments, Rosling emphasized that there are also numerous challenges. There are sections of the society and country that continue to be underrepresented in India’s entrepreneurial scene, including women, and people from rural areas. Another challenge faced in India is the lack of technical innovation in the startup phase. Many founders resort to business model innovation to bring about a quick profit in preference to building lasting companies through technical innovation. There exists a need for an environment that encourages research and innovation at the early stages of a potential founder’s education—in high schools and universities. Incubating and testing ideas at universities will provide the founders an opportunity to understand the nuances and challenges of being an entrepreneur, while at the same time encouraging innovation.

Following his remarks, Rosling invited Karthik Reddy to join him in discussion about startups in India and the future of entrepreneurship. Reddy got the ball rolling, engaging Rosling on a comparison with China’s entrepreneurial space. Agreeing on the fact that innovation in China was happening at a much higher level than in India, both Rosling and Reddy stressed the importance of Indians opening up to the possibility of traveling to and learning from China. The discussion eventually transitioned towards Karthik’s work in the venture capital (VC) field. While the VC field is nascent in India, it has been crucial in driving and supporting innovation. Venture capitalists can play a stabilizing role in providing structure and experience to first time entrepreneurs, who are inexperienced in the way laws, sourcing funds, and running companies interact with each other. Public questions followed this engaging discussion and focused on a wide range of interest areas, including investing, startups, founders and crowdfunding, amongst others.