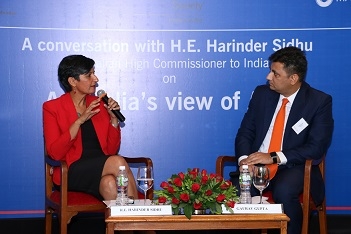 Asia Society India Centre had the pleasure of hosting Her Excellency, Harinder Sidhu, the recently appointed Australian High Commissioner to India along with Mr Gaurav Gupta, Managing Director and Head-Macquarie Capital India for a discussion on Australia’s view of Asia.

The programme started with a brief insight on Asia-Australia relationship by H.E Sidhu, which was followed by a one on one discussion between Sidhu and Gaurav Gupta and then was left open to the audience for a question and answer round. H.E Sidhu mentioned that Australia is historically and geographically linked to Asia which makes it an inevitable and substantial partner.

The partnership initially began as an economic one, the success of which widened the partnerships to security also. She maintained that Australia has strong relationships with countries in Asia and continues to grow. Of the top 6 partners, 5 are Asians. Indonesia is a substantial partner and so is Japan. But China is Australia’s largest partner with a trade over 150 billion dollars. Australia has played a large role in the rise of the Chinese Economy. Sidhu discussed that India- Australia relationship is healthy, India being the fifth largest export market.

Also, there are 53,000 Indian students in Australia which is the second largest set of foreign students. But there is still room for improvement as the exports are mainly coal and gold and there is a need to expand the product base. She maintained that Australia sees Indo-Pacific partnership as strategic and important. Australia will continue to support India’s petition to enter APEC and a permanent seat in the UN Security council. The support will also be ongoing at ASEAN and Pacific meetings.

There is constructive preparation for an FTA with India apart from India being looked as a potential partner for LNG and other markets. There is also an engagement in the cyber security and financial technology space. Australia has also initiated a bilateral naval exercise with India. Sidhu also threw light on Australia’s changing structures and reforms.

The nation has streamlined regulations to increase the ease in doing business. To counter the dwindling commodities and resources industry, Australia is also selling the product know-how. Australia is aiming to participate in the Make in India initiative by imparting technical advice and education and skills training as it has a limited manufacturing sector. Australia is also trying to find a middle ground in the Climate dialogue prevalent in the country which is known to be an extremely politically sensitive topic in the region.

The country has also changed its position from being a defensive nation to coming out with a ‘white paper’ on defense which aims to make Australia more engaging and relationship oriented in the defense space. She also spoke about the increasing cultural exchanges between India and Australia which is steadily growing.