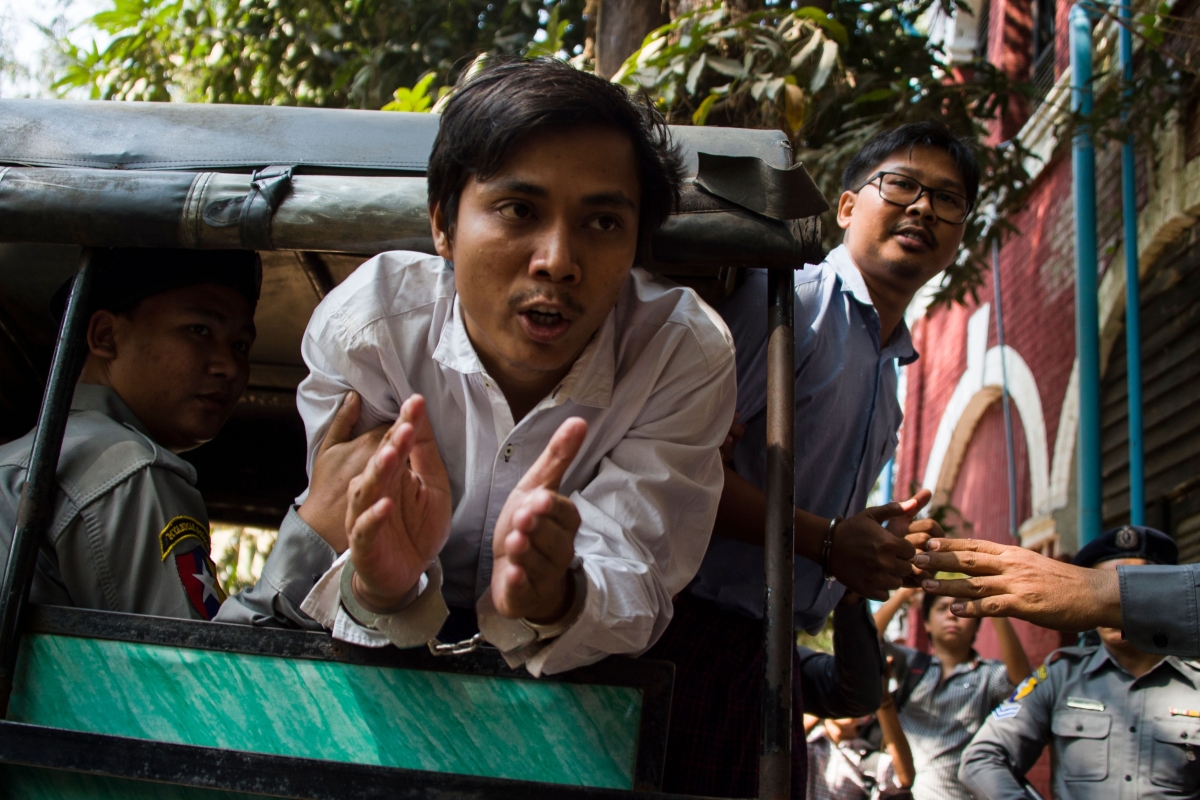 NEW YORK, May 3, 2018 — Asia Society announced today that Reuters reporters Wa Lone and Kyaw Soe Oo have won the 2018 Osborn Elliott Prize for Excellence in Journalism on Asia. The Burmese journalists led a team of Reuters reporters in Myanmar and Bangladesh who provided searing accounts of violence against the Rohingya, the widespread burning and looting of Rohingya villages, and the rape and killings of Rohingya children, women, and men. Their arrest in December prompted an international outcry, but efforts to secure their release have failed to date.

The independent jury that awards the prize called the reporting "courageous and risk-taking in its real-time chronicling of mass atrocities." This is the first time in the prize’s 15-year history that the winners have been jailed for their work.

"Four years ago, Reuters won the Osborn Elliott Prize for their coverage of the plight of the Rohingya," said Jury Chair Marcus Brauchli. "They have continued to prioritize coverage of the Rohingya's desperate situation, backing reporting like that done by Wa Lone and Kyaw Soe Oo, and providing the earliest accounts of the horrific violence and sustained campaigns of ethnic cleansing in Myanmar. Work like this requires tenacity, commitment, and fearlessness."

Working in the conflict areas of Myanmar and the refugee camps in Bangladesh, the reporting team covered the army's campaign against the Rohingya in northern Rakhine and revealed the perils faced by refugees crossing the border. Reporting was amplified by interactive multimedia presentations that portrayed the full extent of the refugee problem and the violence, including the widespread burning of Rohingya villages.

Reuters will be honored at a luncheon event and awards ceremony at Asia Society in New York on May 23. NPR Middle East correspondent Deborah Amos will moderate a discussion about the series and the Rohingya, and Jury Chair Marcus Brauchli will present the award.

Asia Society's "Oz Prize" is the premier honor bestowed for excellence in journalism on Asia. The $10,000 cash award is presented annually to the best example of journalism about Asia during the previous calendar year. It honors the late Osborn Elliott, legendary journalist, author and former editor-in-chief of Newsweek. Elliott was a leading figure in the field of journalism who became one of the earliest practitioners of "civic journalism"—the deliberate focusing of the journalistic enterprise on urgent issues of public policy.

"This is not just powerful journalism, it is also brave journalism," said Tom Nagorski, Executive Vice President of Asia Society. "We are excited to honor Wa Lone and Kyaw Soe Oo, as well as Reuters, with the Osborn Elliott Prize. Their work is precisely the type of reporting that our late trustee Osborn Elliott championed in his illustrious career as an editor."

The jury also recognized the following as 2018 finalists:

Previous winners of the prize are:

Founded in 1956 by John D. Rockefeller 3rd, Asia Society is a nonpartisan, nonprofit organization that works to address a range of challenges facing Asia and the rest of the world.  Asia Society has cultural centers and public buildings in New York, Hong Kong, and Houston, and offices in Los Angeles, Manila, Mumbai, Tokyo, San Francisco, Seoul, Shanghai, Sydney, Washington, D.C., and Zurich. Across the fields of arts, business, culture, education, and policy, Asia Society provides insight, generates ideas, and promotes collaboration between Asia and the world.