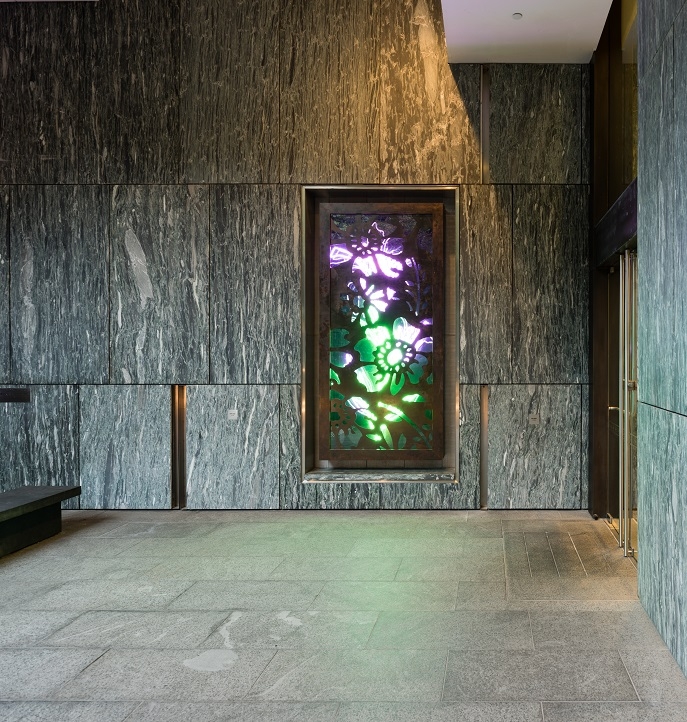 Adrian Wong’s research-based practice explores human relationship to the environment, often through fictional narratives. On the occasion of the 2017 exhibition Breathing Space: Contemporary Art from Hong Kong, Wong was struck by this niche, which was designed by the Center architects for artwork display, to continue his on-going Untitled Grates series. Replicated from a local, second-hand window grate, the work references Hong Kong’s Bauhinia symbol and other common floral motifs popular around the Pearl River Delta during 1960-1975. The work is a nostalgic reference to the economic boom at the height of Hong Kong’s manufacturing industry and recalls the weathered neon street signs that witness the city’s social and cultural transformations. 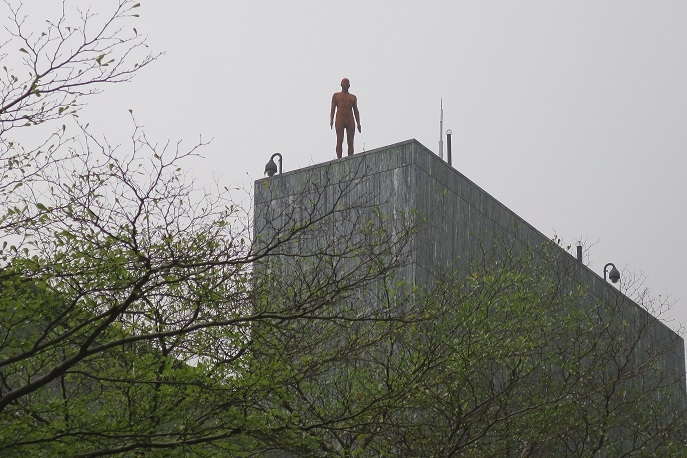 Antony Gormely is widely acclaimed for his sculptures, installations and public artworks that investigate the relationship of the human body to space. This sculpture, part of Gormley’s series Another Time, is one in a hundred cast from the artist’s own body. Looking over the fast-paced city from ASHK’s highest rooftop, the sculpture stands frozen in time to allow us to reflect on what it means to be alive as an individual, and how human beings fit in with the scheme of the world. The sculpture was brought to ASHK in 2015 through Event Horizon, a large-scale public art installation in Hong Kong presented by the British Council. Thereafter, ASHK launched a community campaign to allow the sculpture to remain in Hong Kong as a commitment to public art. 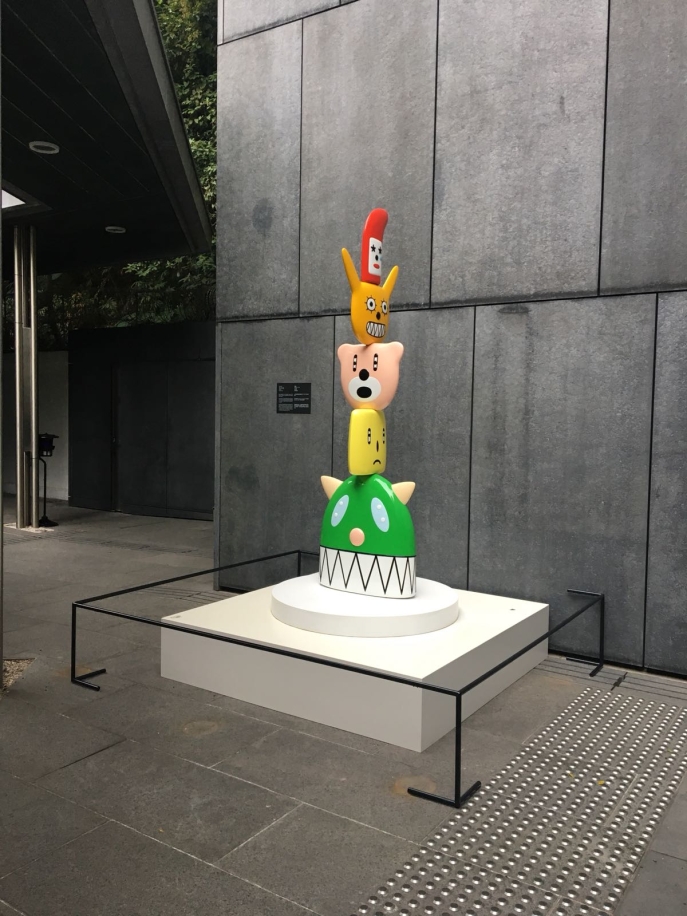 Eddie Kang is known for his original, nostalgic characters influenced by television shows and cartoons of the millennial generation. Inspired by his urban upbringing in Seoul, Kang created this sculpture with five of his characters—Storyteller the Clown, Cabbit, Bubble Bearcup, Rag Doll and Goblin the Robot—to reflect a spectrum of emotions in city life that resonates with Hong Kong. Kang uses a cartoonish aesthetic to recall the joy and simplicity of childhood in the hopes of sharing optimism against the unrelenting change of a modern city.

Enoch Cheung works with photography, video and installation to question our perception of daily life and social issues. Cheung was fascinated by how the Former Explosives Magazine transformed from an abandoned heritage site into a revitalized Center for arts and culture through preservation and new construction. On the occasion of the 2017 exhibition Breathing Space: Contemporary Art from Hong Kong, he used long exposure night-time photography to capture where old and new materials converge at the site. Using laser pointers and flashlights, these panoramic images trace memories from the site’s colonial past. 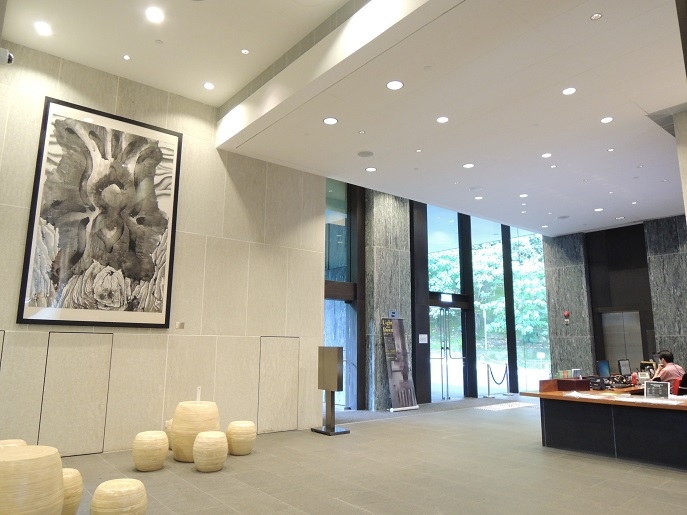 Since the 1980s, Gu Wenda has been recognized as a daring master of ink painting. His provocative large-scale installations often toy with Chinese calligraphic words, removing or blurring strokes, to challenge cultural prohibitions and authority. This painting is part of Gu’s on-going Mythos of Lost Dynasties series started in 1983. As with many other works in the series, it features a monumental pseudo-Chinese seal script character emerging from a splashed ink landscape. To contemporary readers, ancient seal script and Gu’s invented ideograph could be equally illegible. The artist consistently employs pseudo-characters in his practice to create ambiguous familiarity that questions semantic meaning and one’s relationship with cultural history.

Gift of Take A Step Back Collection 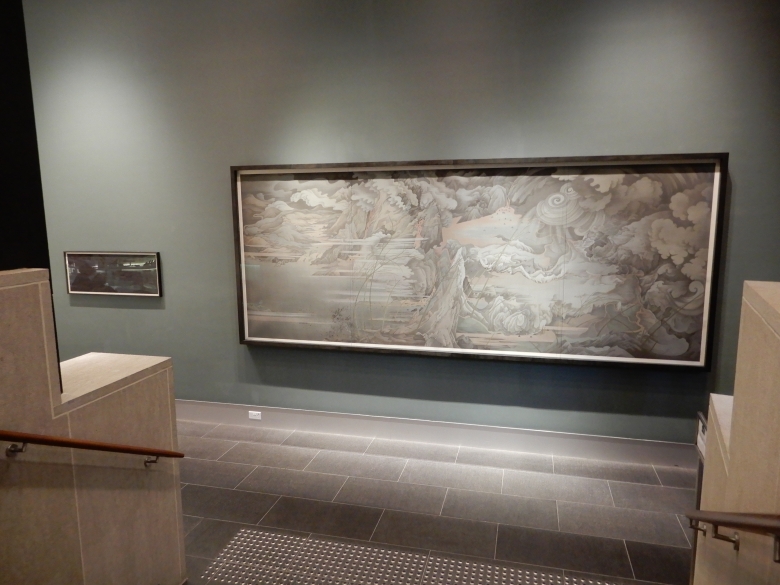 Hao Liang is widely recognized for his contemporary landscape compositions that blend classical art with contemporary vision and weave together Chinese and Western cultural allegory. This diptych explores time and perspective. Hao depicts the same fantastical landscape in two versions: a monumental one of a colorful day, and a smaller one showing the intense dark of night. In both, Hao distorts spatial dimensionality and proportions, emphasizing the constant transformation of the sea, land and sky. The paintings were inspired by ink stone tablets of Qing dynasty literatus Wang Ziruo, who created small replicas of huge, eroding ancient steles engraved with various texts, pictures and historical information. Struck by these tablets and their rubbings, Hao applied the same logic to his landscapes, showing how light, scale, and texture distort legibility and memory. 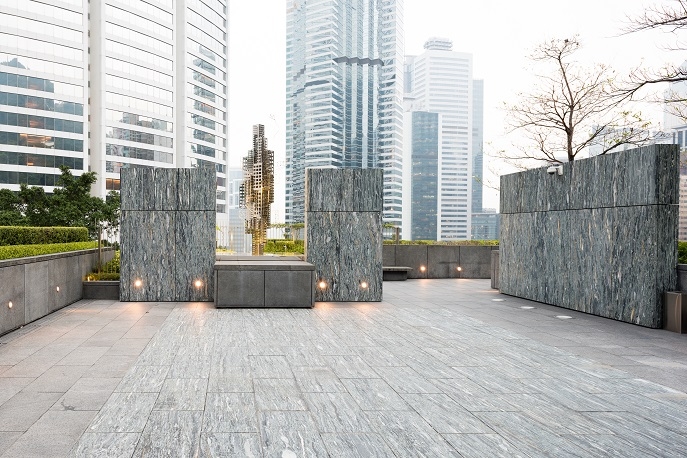 Vaan Ip is inspired by the urban architecture of Hong Kong and his childhood memories. Previously featured in the 15th Venice Biennale International Architecture Exhibition in 2016, Ip’s Lost City series captures the complexity of Hong Kong’s congested urban landscape. On the occasion of the 2017 exhibition Breathing Space: Contemporary Art from Hong Kong, Ip continued his series with this site-specific sculpture. Reflecting the city on its surface, the sculpture draws our attention to Hong Kong’s claustrophobic urban landscape. Ip includes a kite soaring out of his steel complex as a symbol of hope against ceaseless urban transformation. 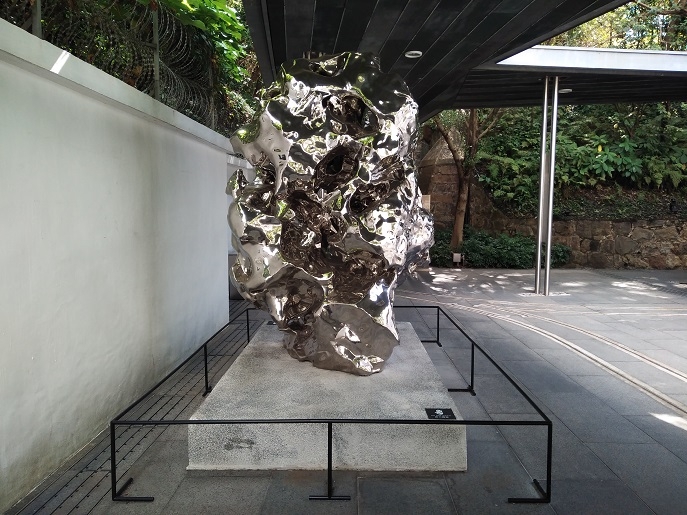 Artificial Rock No. 121, 2007
Zhan Wang
(Location: Outside Starr-Greenberg Building; not on view currently)

Zhan Wang is a sculptor best known for his Artificial Rock series that often features stainless steel forms of meteorites or Chinese garden rocks. As early as the Neolithic period, rocks have been prized in China for their strange and dynamic forms. Later, they were widely collected by Chinese literati and admired as imaginary mountainscapes or microcosms of the universe. By casting the form of scholar’s rocks with industrial stainless steel, Zhan prompts us to think about how tradition evolves and sustains in the contemporary world. This sculpture resonates with the intention of the Center’s architects, who were inspired by their visits to classical Suzhou gardens to design ASHK as a “horizontal garden in a vertical city.” 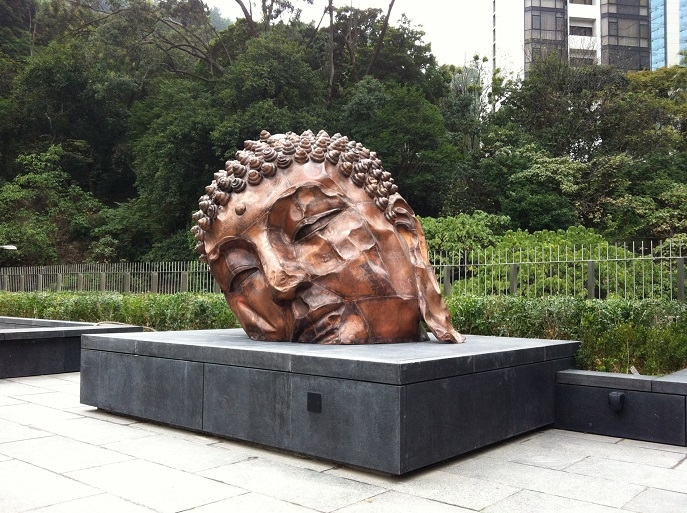 Zhang Huan is internationally recognized for his visceral and confrontational endurance performances in the 1990s and later sculptures and paintings that explore themes of memory and spirituality in relation to Buddhism. This sculpture was inspired by Zhang’s trip to Tibet in 2005, where he discovered fragments of Buddhist sculptures damaged during the Cultural Revolution. Rather than a religious image, this monumental Buddha head reflects on the history of human conflict and the preservation of culture. Included as part of ASHK’s inaugural exhibition Transforming Minds: Buddhism in Art in 2012, this sculpture now sits at the Center as a permanent installation.

Gift of the JK and Ingrid Lee Foundation

Special thanks to Susy & Jack Wadsworth in recognition of their generous support towards the installation of this artwork.