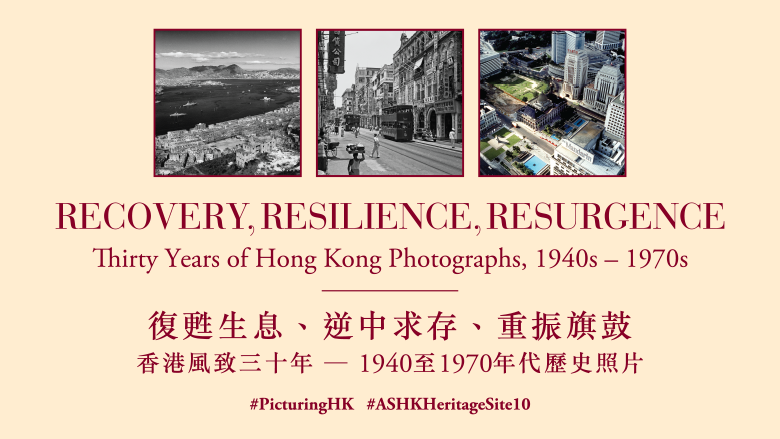 This exhibition’s photos show Hong Kong during consecutive periods, as it was seen around the middle of the last century. The images span some thirty years of great change: from the postwar recovery in 1946 – 1947, through the resilience of the 1950s, to the resurgence of the 1960s – 1970s. The photos were taken by three photographers. In the order of their Hong Kong work they were: Hedda Morrison, Lee Fook Chee and Brian Brake. Each had markedly different life backgrounds and photographic objectives.

Hedda Morrison’s Hong Kong photos, like her prior work in China and later images of Southeast Asia, reflected her high regard for ordinary people. Thus, in 1955 some of her photos were published in the classic, life celebrating New York photobook The Family of Man.

Lee Fook Chee, as a person and photographer, was far different to Morrison and Brake. Lacking their comfortable origins, and also their photographic training, he harnessed his personal resolve and the ability to take photos for selling to tourists who visited Hong Kong.

Yet all three, in their own way, recorded Hong Kong during its modern, crucible decades – thus passing on to our present times the photographic heritage seen in this Asia Society Hong Kong Center exhibition. 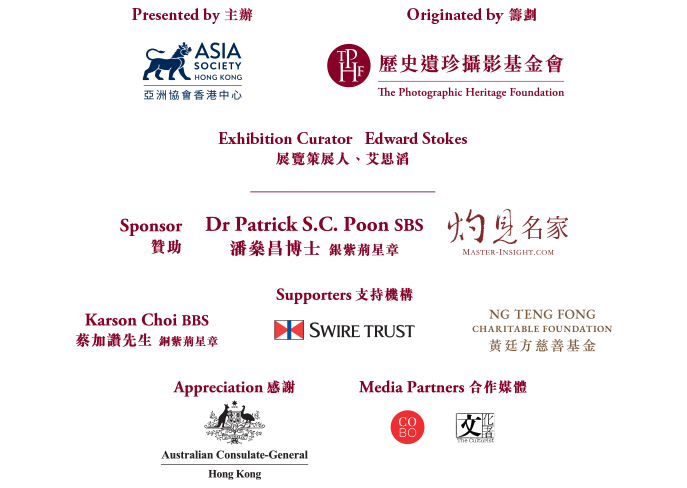 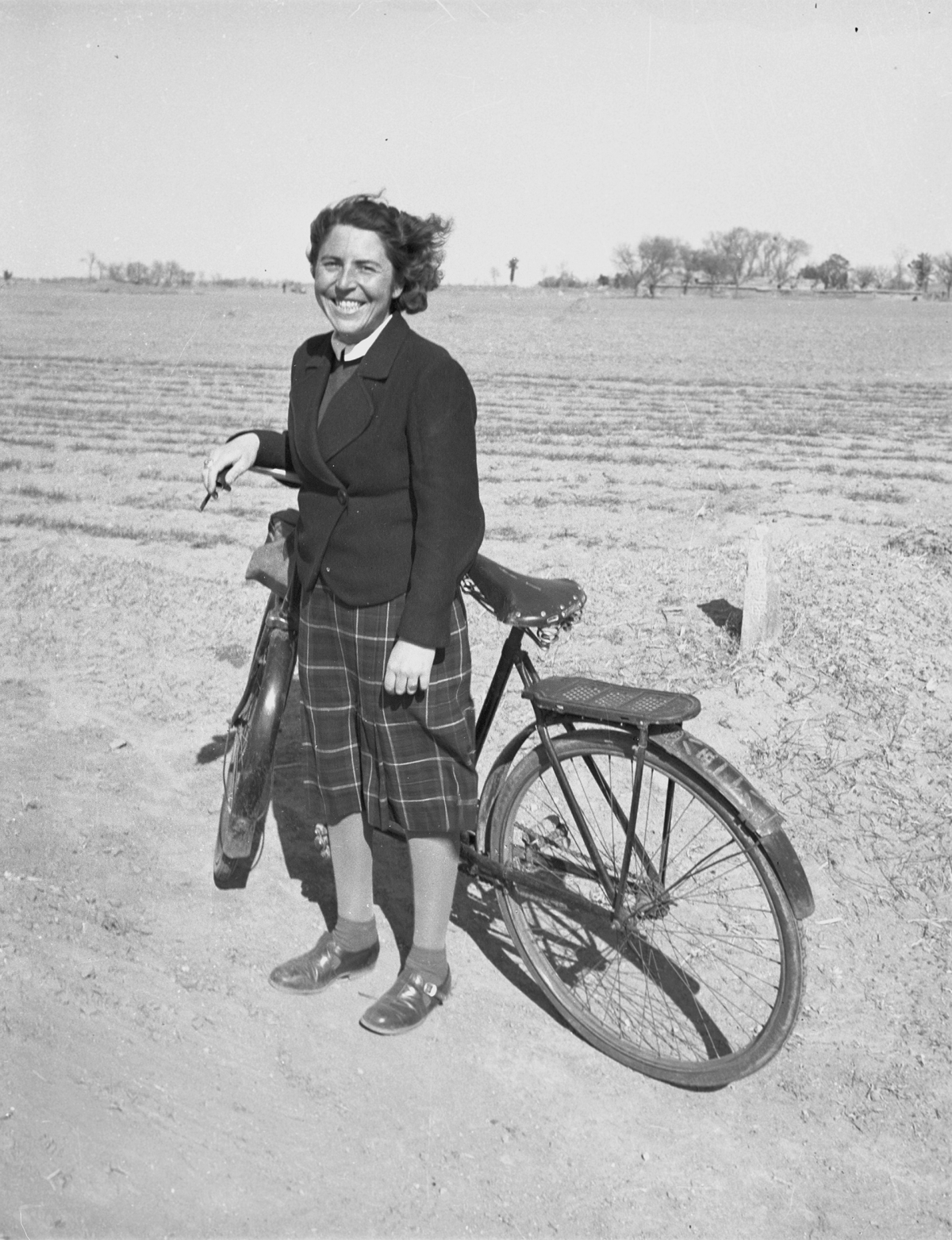 In 1946, Hedda Morrison arrived in Hong Kong. During the following six months she photographed almost every aspect of the colony, forming a diverse record time capsule of its postwar recovery. Morrison’s enduring passion was to record the lives of ordinary people and her photos reflect a masterful eyes. Some of these images were included in the government’s 1946 Annual Report. Photographer of vanished lives, postwar sojourner in Hong Kong. 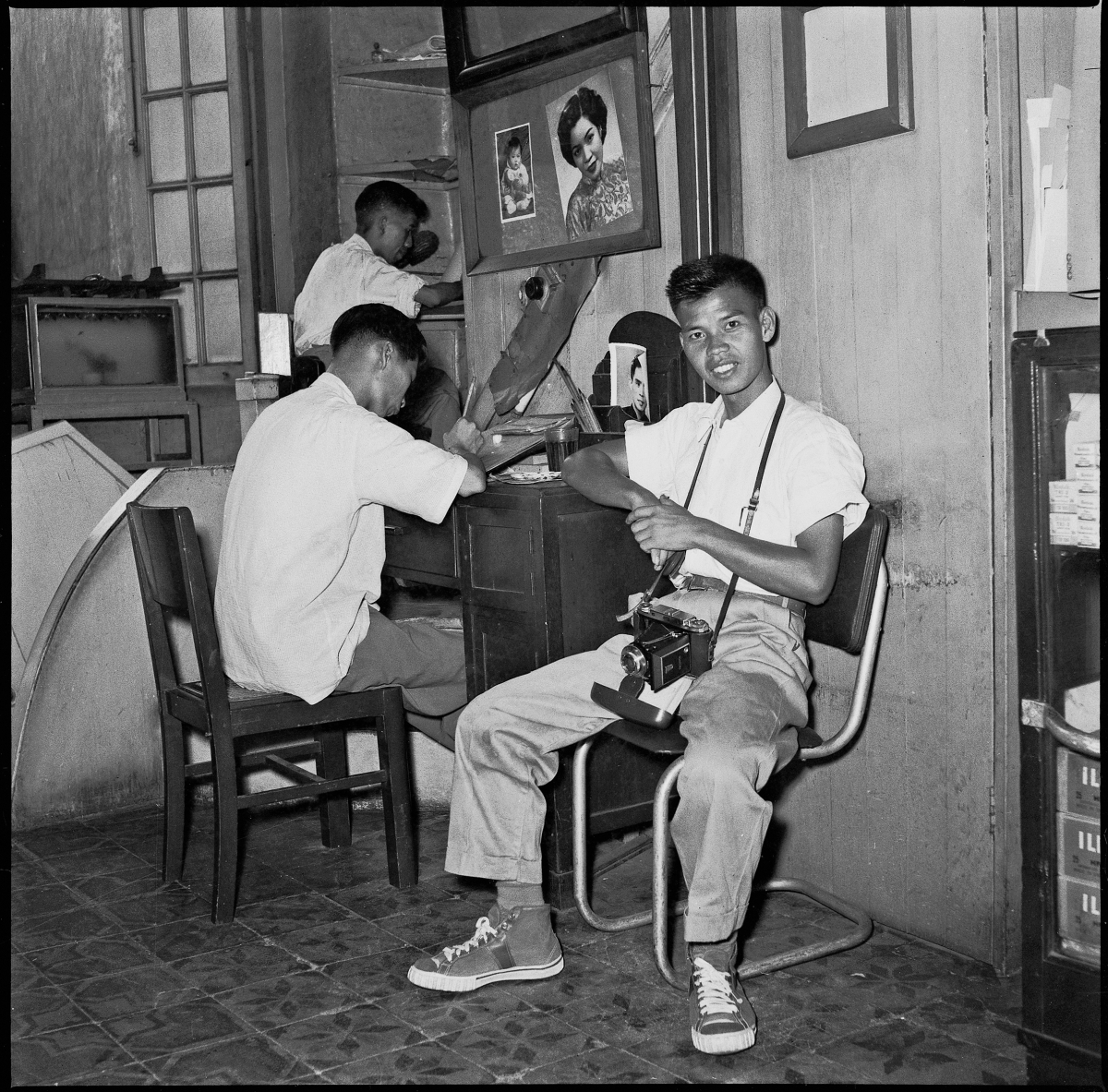 Departing from Singapore as a seaman, Lee Fook Chee came ashore in Hong Kong in 1947. Lee absorbed the basics of photography at his cousin’s studio and became a journeyman photographer. During the 1950s he made his living on The Peak by taking and selling portraits. Later he mainly sold his Hong Kong photos, as seen in this exhibition. For him, self-respect and pleasure in doing useful work, his photography and photo selling, undoubtedly were life highlights. 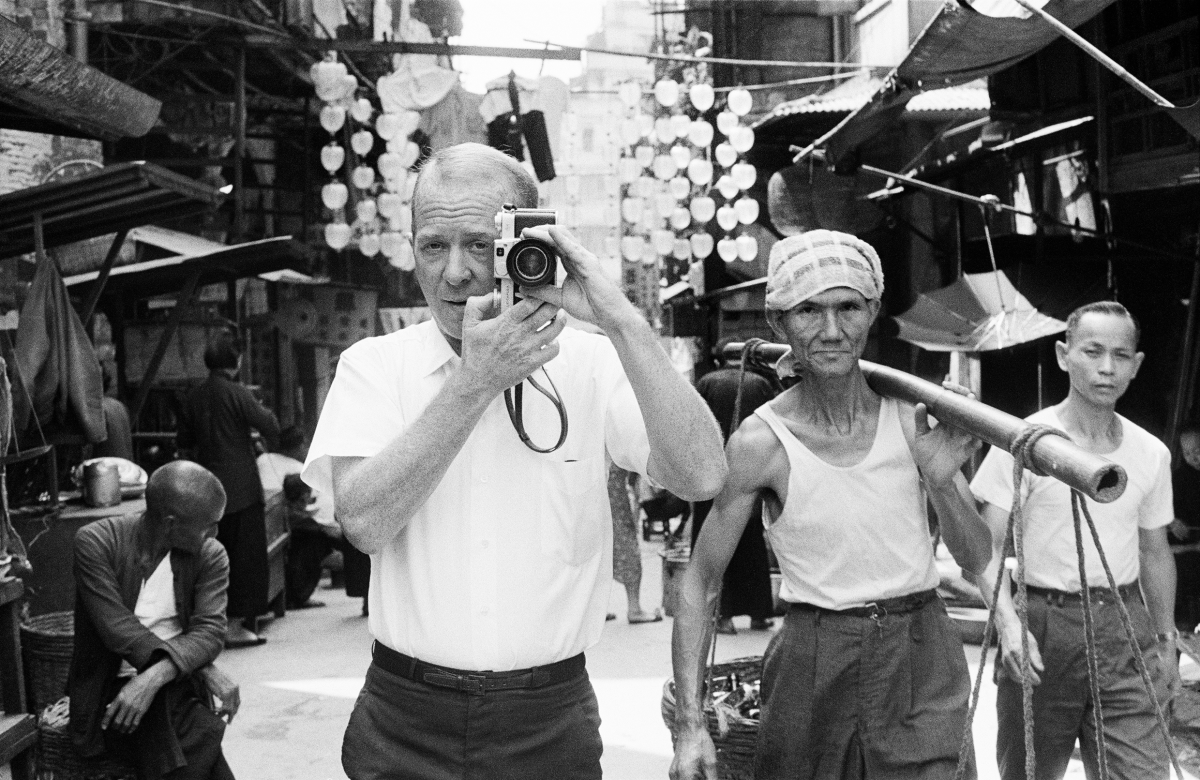 Imbued during his teenage years by photography, Brian Brake arrived in Hong Kong at the end of 1957, after a six-month journey from London. Brake photographed widely here and gained international recognition in the golden era of photojournalism from the 1960s to 1970s. Commissioned by TIME-LIFE in the early 1970s, Brake recorded Hong Kong for its “The Great Cities” book series and captured the spirit of Hong Kong’s people with his perceptive and focused observations, abundant drive and talent.

Hedda Morrison’s centrally positioned, symmetrical photo highlights how these Western District buildings were crammed together – a fact accentuated by the closely set washing poles and signs. Ordinary Chinese, despite severe housing overcrowding, had a great desire for cleanliness – as the hanging washing suggests.
Hedda Morrison這張作品構圖置中對稱，展示西環密麻麻的樓宇，衣裳竹緊挨着商舖招牌，擠迫的環境可見一斑。曬晾的衣服儼如萬國旗，由此可見華人百姓雖然只有蝸居容身，但卻很愛清潔。

In Des Voeux Road, just east of Ice House Street, pedestrians amble across without a care. The tram system had survived the war, and in the late 1940s it was rejuvenated. But Hong Kong’s vehicles had been severely looted by the Japanese. In late 1946, records show just 1,450 registered cars, 195 taxis and 1,152 trucks.
德輔道中雪廠街口以東處，行人氣定神閒過馬路，不用擔心來往車輛。電車系統沒有遭戰火摧毀，1940年代後期重新投入服務，但香港大部份車輛都被日軍掠去，根據1946年底的註冊記錄全港只有1,450部私家車、195部的士和1,152部貨車。

Immediately after the war, a time of great need, street sellers like this woman had lives full of concern and uncertainty – as her wary, sharp-eyed expression perhaps suggests. The woman’s hair is secured with a bobby pin, a shawl does for the winter. Senior Service, Camel and Lucky Strike were popular cigarette brands.
二戰剛結束百廢待興，民生困苦，像相中在街頭擺賣的婦人，日子都過得憂心忡忡，前路難以預測。她銳利的眼神難掩戒心，頭髮隨便用髮夾盤起，身上只有一件披風抵擋寒風。Senior Service、駱駝及好彩是當時最暢銷的香煙品牌。

Tanka women collecting fresh water from a shore hydrant. Carrying water to junks and sampans was mostly done by women and children. Besides their clothing and wicker hats, the women are notable for their broad feet: the result of lives spent barefooted due to poverty, and for steadier footing on boats’ moving decks.
蜑家婦女在岸邊水龍頭輪候打水。水上人每日也要到岸上打水到帆船和舢舨使用，這份差事一般由婦女及小孩負責。婦女們除了身穿典型蜑家服飾和頭戴竹帽，腳部扁闊也是特徵，這是長年赤腳在船上刻苦生活所致，而且赤腳在甲板上行走步履較穩。

Elegant Women on The Peak

Two elegantly dressed ladies pose on Victoria Peak. Central District lies far below. The photo must be from between late 1951 and early 1952 – since the Bank of China Building, opened in 1952, is nearing completion. The image is from Lee’s initial photographic period when he took portraits of tourists on The Peak.
兩名衣着優雅的女士在山頂拍照留念，山下是中環市區。相片必是1951年底或1952年初拍攝，因為在1952年開幕的中國銀行大廈當時已差不多落成。這是李福志早年主力在山頂為遊客拍人像照時期的作品。

The photo shows Chinese New Year – probably at the market in Reclamation Street, Mong Kok. Brake, as he did very well, has blended into the crowd. The tangerines – lucky gifts – are timeless. But the boy’s United States Navy sailor’s cap is likely from the 1960s or 1970s, when “USN” ships were often in port for “R and R”.
這張新春照片的拍攝地點相信是旺角新填地街的街市。Brake駕輕就熟地走進人群拍攝，融入港人的生活，寓意吉祥的年桔是長青的賀年佳品。小男孩的美國海軍水手帽應是1960或1970年代的產物，其時美國海軍艦隻經常訪港，讓軍人休憩娛樂。

For his TIME-LIFE book Brake would have had an ample budget – thus aerial shooting was viable. This bird’s-eye view, also in early morning light, looks over Aberdeen, Ap Lei Chau and their anchorage. Ap Lei Chau’s flattened hills, and Aberdeen’s reclamation and housing estates, indicate the rapid pace of change.
Brake為TIME-LIFE 攝影出書相信預算很充裕，所以可以高空拍攝。這張鳥瞰照片同樣在清早的晨光下取景，鏡頭望向香港仔、鴨脷洲和區內的漁港。鴨脷洲的山丘都被削平，香港仔則填海造地建造屋邨，轉眼間改頭換面。

The characters on the chef’s hat tell us that this is the Jade Garden Restaurant, a well-known Cantonese establishment. The dress suggests the photo is from the 1970s. Brake was observant and very fast. Here, he has captured each diner’s expression perfectly – and, using a wide-angle lens, portrayed the entire group.
從廚師的帽子可知這是著名粵菜食肆翠園酒家，從人物的衣着看來，應是1970年代拍攝。Brake觀察力強且眼明手快，這張照片及時捕捉了食客的不同表情，然後透過廣角鏡將整個群組攝入框內。 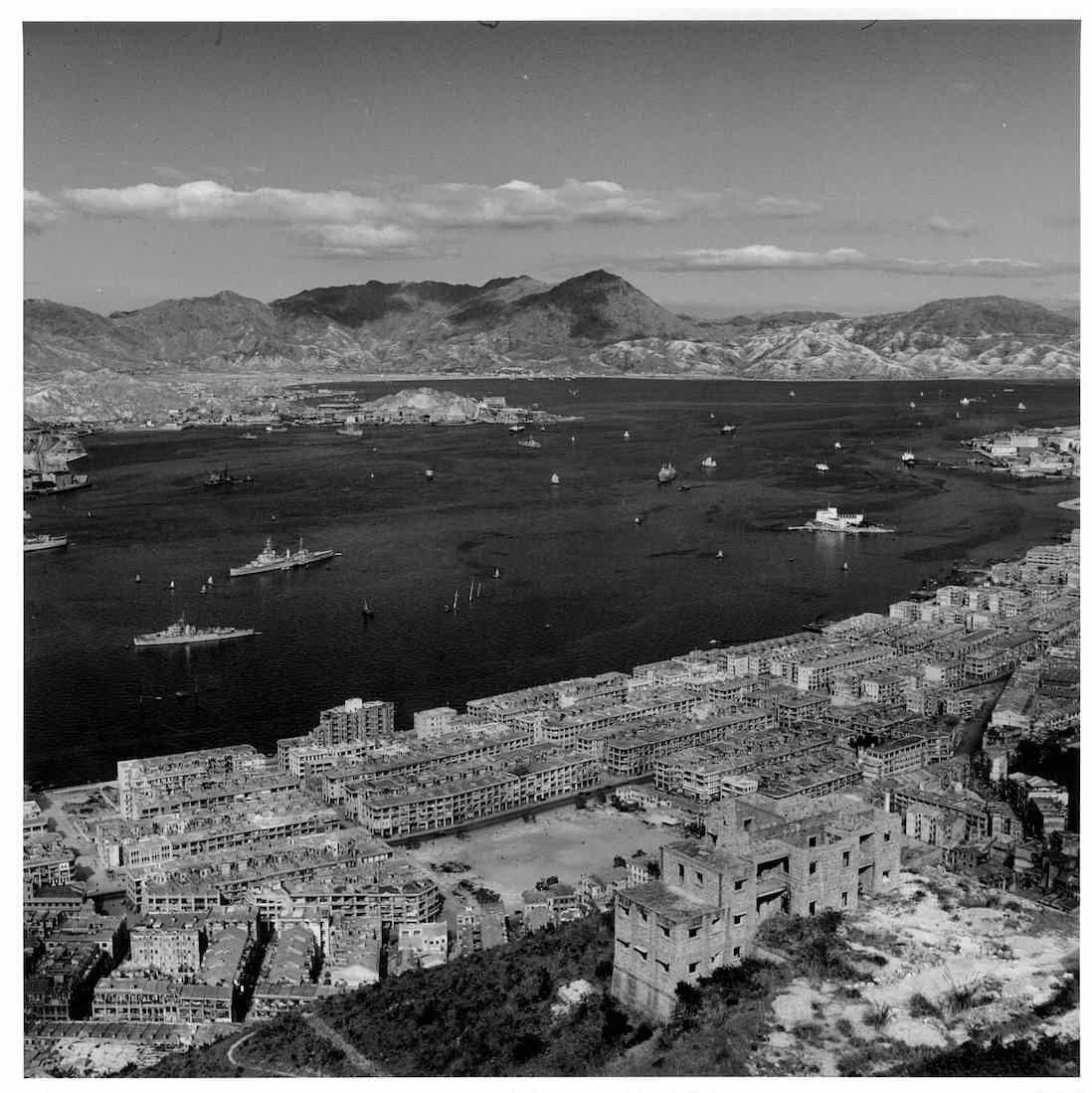 As part of the exhibition, related programming is organized throughout the exhibition period. The aim is to provide an enriching experience, and deep dive into the inspiration and personal journeys of photographers Hedda Morrison, Lee Fook Chee and Brian Brake, and their historically significant and poignant images of Hong Kong in the 1940s-1970s.

Thank you to Hewlett-Packard for sponsoring the photo printing.

We offer free regular guided tours in English and Cantonese to provide more visual insight into the works by Hedda Morrison, Lee Fook Chee and Brian Brake. The guided tours can accommodate max. 12 people per tour on a first-come, first-served basis.

Our exhibition curator Edward Stokes highlights images by Hedda Morrison in our Recovery, Resilience, Resurgence exhibition. German-born Hedda Morrison’s 30 black-and-white photographs depict Hong Kong in 1946-1947, when she lived in the city for six months and photographed almost every aspect of the colony. She was a documentary photographer who created historically significant images of Beijing, Hong Kong and Sarawak in the 1930s-1960s. Her images of Hong Kong, like her prior work in China and later images of Southeast Asia, reflect her high regard for ordinary people.

Singaporean photographer Lee Fook Chee arrived in Hong Kong in 1947, and photographed the city over the next decade, earning a simple living by selling his photos to tourists on The Peak. He initially took and sold portraits, and later mainly sold his Hong Kong photos. His images can be seen in our Recovery, Resilience, Resurgence exhibition, featuring 37 of his black-and-white photographs that highlight the changes Hong Kong experienced in the 1950s. Our exhibition curator Edward Stokes introduces some of his photographs in our Chantal Miller Gallery.

Our Recovery, Resilience, Resurgence exhibition includes 20 colored images that portray Hong Kong from the 1960s to 1970s by Brian Brake, New Zealand’s most successful international photographer. Prior to moving to the city, he travelled the world for prestigious photo agency Magnum. A master in photojournalism, his photos appeared regularly in iconic contemporary photo magazines, notably Life Magazine. Intrigued with Hong Kong, he was stationed in the city for over a decade, and recorded Hong Kong for TIME-LIFE's The Great Cities book series. Our exhibition curator Edward Stokes introduces Brian Brake's snapshots of Hong Kong's resurgence.