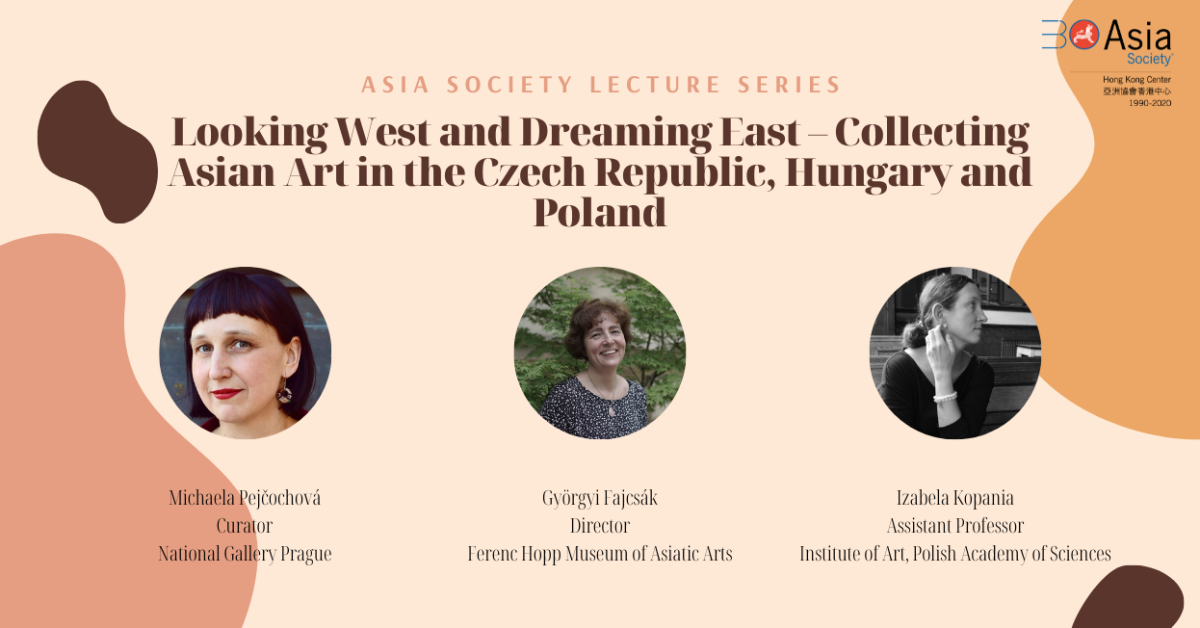 Orientations’ July/August 2021 issue spotlights Asian art collections in Eastern Europe with guest editor, Michaela Pejčochová, who sets the context with the 16th-century collections of the emperor Rudolf II in Prague and the archduke Ferdinand II in Ambras, Austria and looks closely at the collection of Chinese art in the National Gallery Prague. Izabela Kopania provides a historiography of Chinese art in Eastern Europe and takes us through a journey through the ‘Chinese’ rooms of various castles and palaces while Györgyi Fajcsák brings us to modern times with a discussion on the famous Hungarian sinologist, Pal Miklos, and his connection to Chinese visual arts, literature and theatre.

Michaela Pejčochová specialises in Chinese art, the theory of the arts in China, and collecting Asian art in the West. She is the curator of the Chinese art collections at the National Gallery Prague and has published its unique collection of modern Chinese ink painting in Masters of the 20th-Century Chinese Ink Painting from the Collections of the National Gallery in Prague (2008). Her recently completed monograph, Emissary from the Far East: Vojtěch Chytil and the Collecting of Modern Chinese Painting in Interwar Czechoslovakia, analyses Chytil’s unique collection of Chinese, Japanese and Tibetan art in the context of the interwar period collecting of Asian art in Europe. Besides modern Chinese art, she has also published studies on old Chinese painting and Song and Ming dynasty theories of painting, and is currently working on the history of collecting Chinese art in the Central-European region. (Moderator)

Györgyi Fajcsák is a Sinologist and Director of the Ferenc Hopp Museum of Asiatic Arts. Her main fields of research are the history of collecting Asian arts in Hungary, Chinese ceramic art, Chinese painting in the 19th-20th centuries and Buddhist art. She has curated and co-curated several exhibitions such as ‘Chinese Buddhist Art in the 10th-19th Centuries’ (1994); ‘The Collecting of Oriental Art in Hungary’ (1997); ‘Peach Blossom and Mohammedan Blue: The Art of Chinese Ceramics’ (1999); ‘Heart of Beauty: Selected Chinese Masterpieces of 5000 Years’ (2014); ‘Fascination of the Nature: Paintings of Qi Baishi from the Collection of the Beijing Academy of Fine Arts’ (2015); and ‘Made in Asia: The Centenary of the Ferenc Hopp Museum of Asiatic Arts’ (2019). She was the author of Collecting Chinese Art in Hungary from the Early 19th Century to 1945 (2007); White Gold, Mohammedan Blue and Peach Blossom: Chinese Ceramics in the Collection of the Ferenc Hopp Museum of Eastern Asiatic Arts. Vols. I-II (2007, 2011); and Mulan at Eszterháza: The Lacquer Cabinets in the Collection at Esterházy Palace (2018).

Izabela Kopania holds PhD in art history from the Institute of Art, Polish Academy of Sciences where she serves as Assistant Professor.  Her main fields of research are visual culture of the 18th century, cultural relations between China and European countries in the early modern period and exhibitions of ‘freak’ people in Central and Eastern Europe prior to 1939. She now works on the project devoted to the historiography of Chinese art in Europe in the period spanning the years 1600 to 1950, funded by the National Science Center, Poland. She is the author of a monograph, Objects – Gardens –Imaginings: China in the culture of the Polish-Lithuanian Commonwealth Under the Reign of Stanislaus Augustus (2012; in Polish), editor of South-East Asia: Studies in Art, Cultural Heritage and Artistic Relations with Europe (2012) and guest editor of a special issue of Acta Ethnographica Hungarica (2019/1) entitled, Popular Landscape of Entertainment in East-Central Europe, 1850–1939.