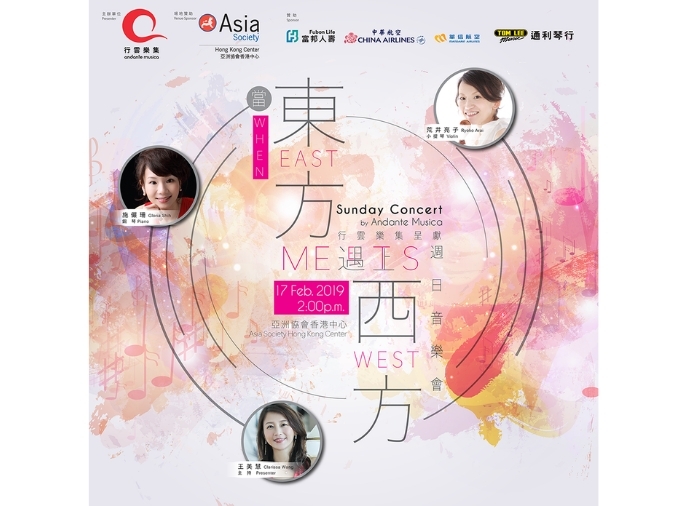 Renowned Taiwanese pianists Gloria Shih and Japanese violinist Ryoko Arai will bring you beautiful classical music in Sunday afternoon. Music from one of the most influential 20th century composers, Japanese composer Toru Takemitsu will be presented to audiences with his unique fusion of oriental and western style. Gloria Shih and Ryoko Aria will join hands to play Debussy and Ravel’s Sonata for Violin and Piano. Clarissa Wang, Founder of Andante Musica, will guide the journey by giving informative exploration of the selected pieces and help you make most of your experience in this concert.

Born in Taipei, Taiwan, Gloria Shih is recognized for her diverse abilities as pianist and as a collaborative artist.  She has worked with members of the Emerson String Quartet, members of the Meridian Arts Ensemble, and members of the Metropolitan Opera.  Her performances have included venues such as Carnegie’s Weill Hall, Merkin Hall and Oji Hall in Tokyo. She has received critical acclaim for her performances throughout Asia, Europe and North America, England, Japan, and South Korea.  As an active chamber musician, she founded Gracieux Trio in 2003. The trio won critical acclaim for two released CD albums and has been giving concerts and master classes regularly in Taiwan and Japan.

Japanese-born violinist Ryoko Arai has performed as an active soloist and chamber musician in Japan, Taiwan, and the United States. As a violinist of Gracieux Trio, she has performed at various concert halls including Carnegie Hall, Merkin Hall, etc.

Royoko has studied at Texas Christian University, the Hartt School at University of Hartford, and Stony Brook University where she earned her Masters and Doctoral degrees in violin performance.  She has studied violin with Ani Kavafian, Philip Setzer, Katie Lansdale, Barbara Barber, Kosuke Hagiwara, and chamber music with the members of Lincoln Centre Chamber Music Society, Emerson String Quartet, and Lion’s Gate Trio.

After her completion of her studies, she has served as a faculty at Jin-ai Women’s High School (Music Course) and Fukui Junior String Ensemble Seminar along with her career as an active chamber musician performing in many venues in Japan.  Royoko moved to Hong Kong in 2014 with her family and serves as a faculty member of Hong Kong Baptist University, Hong Kong Academy for the Performing Arts (Junior Programme), and Kinder U Suzuki Music Academy.

Completed her studies in piano performance and music education in University of Music and Performing Arts in Vienna, critically acclaimed Taiwanese pianist Clarissa Wang performed in various cities including Vienna, Belgium, Rome, Riga, Vancouver, Hong Kong, Taiwan and Xiamen. In 1994, Clarissa was invited to join the concert series curated by music master Wu Jiza, toured in Europe with world-renowned pianist Fu Cong and Chen Pi-hsien. She is active in chamber music, choirs and operas accompaniment and collaborated with National Concert Hall Opera Studio and Ya Yun Chamber Orchestra. She appeared in a number of major festivals including Urania Music Festival in Vienna.