Transition and Turbulence: A Conversation on Politics and Security with General (Ret.) David H. Petraeus

2016 was a year like no other, with some of the largest political earthquakes in recent times plunging the world into uncharted territory. The United Kingdom voted to leave the European Union. Donald Trump was elected the 45th president of the United States of America. Meantime, acts of terror were carried out across Asia, Europe and America, as well as the absolute destruction of Aleppo. The Middle East conflict continued as hundreds of thousands of displaced citizens sought refuge in Europe. Despite moments of hope - such as the historic Paris climate change agreement entering into force - what lies in store for 2017? The one certainty is that a significant part of foreign policy actions and outcomes will be defined by Mr. Trump and his administration. Yet given his vague and varied pronouncements on policy issues, both his allies and adversaries alike await with trepidation on what exactly he will do. Join us for an evening in conversation with United States Army veteran and former Director of the Central Intelligence Agency, General (Ret.) David H. Petraeus, who will shed light on the international political and security landscape during a period of transition and turbulence.

General (Ret.) David H. Petraeus is a Partner with the global investment ﬁrm KKR and Chairman of the KKR Global Institute. He is also a Judge Widney Professor at the University of Southern California and a Senior Fellow at Harvard University’s Belfer Center. During his 37-year career in the United States Army, General Petraeus was widely recognized for his leadership of the Surge in Iraq and his command of coalition forces in Afghanistan. He culminated his military career with six successive general officer commands, of which five were in combat. After retiring from the military, General Petraeus served as Director of the CIA, leading the Agency during a period that saw significant achievements in the fight against Al Qaeda and its affiliates. He is the recipient of numerous medals and awards, and has been decorated by 13 foreign countries. A graduate with distinction from the United States Military Academy, he earned a PhD from Princeton University’s Woodrow Wilson School of Public and International Affairs and completed a fellowship at Georgetown University’s School of Foreign Service. 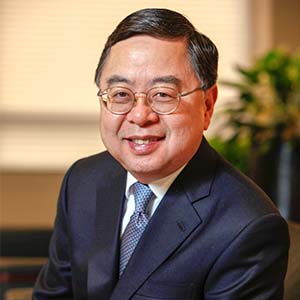 Ronnie C. Chan is Co-Chair of Asia Society and Chairman of Asia Society Hong Kong Center. Mr. Chan serves as Chairman of Hang Lung Properties. In addition, he is Chairman of the One Country Two Systems Research Institute and the Better Hong Kong Foundation, Convener of the Hong Kong Development Forum, Governing Board member of the China-United States Exchange Foundation, and Adviser and former Vice President of the China Development Research Foundation. Mr. Chan is Director of the Board of the Peterson Institute for International Economics, member of the Council on Foreign Relations and former member of the governing boards of the World Economic Forum. Mr. Chan holds an MBA from the University of Southern California. (Moderator)

We look forward to your support. Proceeds from the evening will contribute to supporting Asia Society’s mission of educating people about the countries and cultures of Asia and global issues that impact on the region. Please click here to download the registration form.