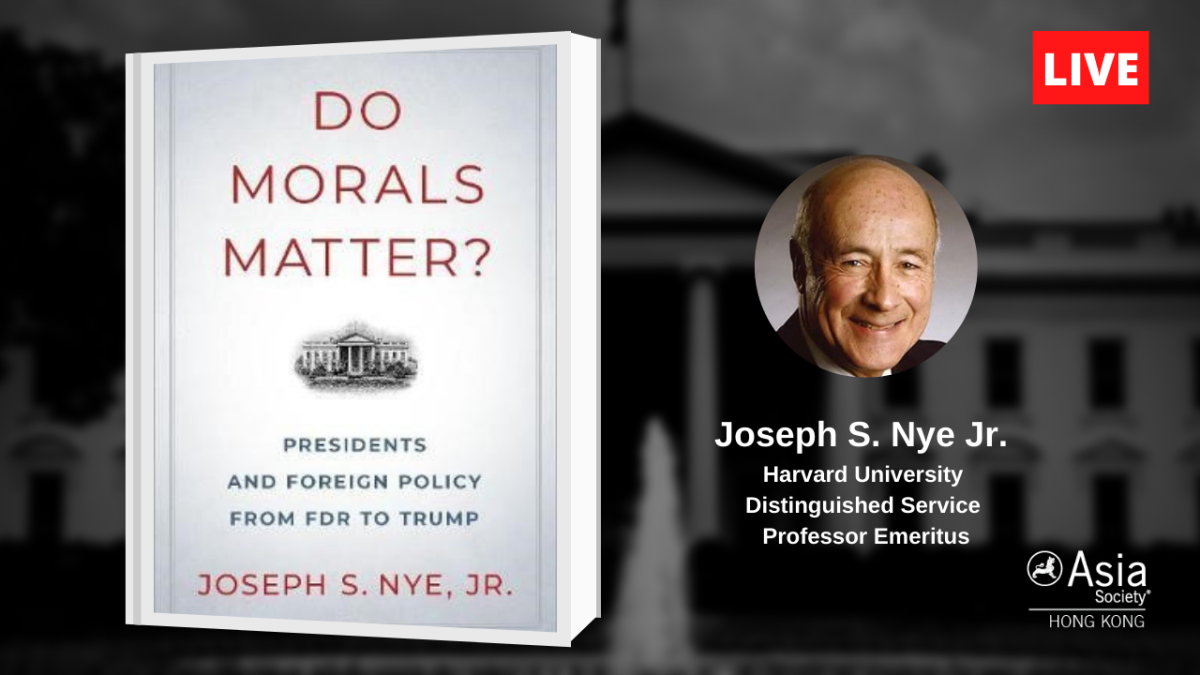 With less than a month left before what pundits are calling “the most important election of our lifetime,” at a critical moment when the state of our world order has looked increasingly uncertain, who better to hear from than one of the world’s most distinguished scholars in international relations?  On October 19, Asia Society Hong Kong Center will host a virtual chat with the co-founder of the international relations theory of neoliberalism and originator of “soft power” himself, Professor Joseph S. Nye Jr.  More recently, the University Distinguished Service Professor Emeritus and former Dean of Harvard’s Kennedy School of Government has uniquely characterized Sino-American relations as a “cooperative rivalry” rather than another cold war.  His latest work is his new book published earlier this year, Do Morals Matter? Presidents and Foreign Policy from FDR to Trump.  In it, Professor Nye grades each of the 14 U.S. Presidents since 1945 on the ethics of their foreign policy decisions. He argues that good moral reasoning should be three-dimensional, weighing and balancing the intentions, the means and the consequences of a President’s decisions. Professor Nye demonstrates that no President was fully constrained by the structure of the American political system - they all actually had choices and these decisions deserve to be judged.

Join us at ASHK for this members only live webcast as we unpack all of the above, in addition to his thoughts on the imminent election, with truly one of the world’s most influential thinkers and global shapers! The general discussion will be 40 minutes long, from 20:20 to 21:00 PM HKT. President’s Circle and Corporate Members will also be invited to join an exclusive 20 minute virtual meet-and-greet with Professor Nye from 20:00 PM HKT.

Joseph S. Nye Jr. is the University Distinguished Service Professor Emeritus and former Dean of the Harvard’s Kennedy School of Government. He has served as the Assistant Secretary of Defense for International Security Affairs, Chair of the National Intelligence Council, and Deputy Under Secretary of State for Security Assistance, Science and Technology. Prof. Nye’s is the author of The Power to Lead; The Future of Power; Presidential Leadership and the Creation of the American Era; and Is the American Century Over. His most recent publication, Do Morals Matter? : Presidents and Foreign Policy from FDR to Trump, will be discussed in this webinar. Prof. Nye is a fellow of the American Academy of Arts and Sciences, the British Academy, and the American Academy of Diplomacy. In a recent survey of international relations scholars, he was ranked as the most influential scholar on American foreign policy, and in 2011, Foreign Policy named him one of the top 100 Global Thinkers. Prof. Nye received his bachelor’s degree summa cum laude from Princeton University. As a Rhodes Scholar, he attended graduate school at Oxford University, and earned a PhD in political science from Harvard.

Alejandro Reyes is an associate professor and director of knowledge dissemination at the Asia Global Institute, at the University of Hong Kong (HKU). He manages AsiaGlobal Online, the institute’s digital journal that provides Asian perspectives on global issues.He had previously served as a senior policy adviser to the Canadian foreign minister. From 2007 to 2017, he was an associate professor in the Department of Politics and Public Administration at HKU.  Born in the Philippines and a citizen of Canada, he was educated at Harvard University and the University of Oxford and in 2000 was awarded an honorary doctorate by Queens University in Charlotte, North Carolina. (Moderator)

Do Morals Matter? : Presidents and Foreign Policy from FDR to Trump by Professor Nye can be purchased online here.

We’ve also ordered 20 copies that will be available for sale soon at our Asia Society Hong Kong Store!