Shen Wei: Dance Strokes
Installed as a site-specific exhibition, Shen Wei: Dance Strokes is the first major solo presentation of recent large-scale oil paintings by Shen Wei (1968 - ) in Asia. Better known as a dancer and choreographer, Shen began his training in traditional Chinese painting ever since young. During the 1980s, when China opened to the west, Shen began to explore oil painting. After moving to New York in 1995, the artist continued to develop his painting as an autodidact. Shen’s large-scale oil paintings are conceived as extensions of his dance practice. The works evoke ink play, space, and roiling forms suggestive of Chinese landscape traditions, while being a dancer’s wholly contemporary experiment with the material of energy.

Untitled No.32 (Bodies and Rooftop, 2016)
The first outdoor, major amalgamative site-specific presentation of Shen Wei’s contemporaneous choreographic and painterly exploration in art in Asia - Untitled No. 32 (Bodies and Rooftop, 2016), preluded by Untitled No. 12 (for bodies, 2015), will premiere on the roof garden of Asia Society Hong Kong Center. This experiential work exhibited as part of Dance Strokes draws inspiration from pockets of greenery that exist within the claustrophobic urban environment. It brings to life through Shen Wei Dance Arts (SWDA, New York) performers a sensuous conversation between nature and the metropolis, between heritage and future, and between Shen’s dancers that paint with movements, and his brush stokes that chasse’ with dynamism. 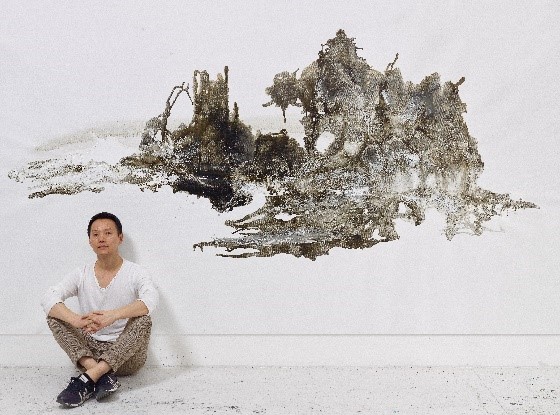 Shen Wei began his training as a traditional Chinese opera performer and painter at a very early age. During the ‘85 New Wave, when China opened to the west, he began his studies in realistic oil painting and modern dance. By 1991, he became one of the founding members of the first Modern dance company in China- The Guangdong Modern Dance Company. In 1995, Shen Wei moved to New York City after receiving a scholarship from the Nikolais/Louis Dance Lab. He became an independent artist and continued to develop his painting and dance in New York City. In 2000, he found his New York based company Shen Wei Dance Arts and toured internationally. Some of his commissioned works include the Park Avenue Armory, Lincoln Center Festival, The Metropolitan Museum of Art, Edinburgh International Festival, American Dance Festival, and the 2008 Beijing Olympics Opening Ceremony. By this time, Shen Wei earned a MacArthur Award, the Nijinsky Award, and the Guggenheim Fellowship. In the last decade, his abstract paintings have developed their own unique voice. His most recent paintings were presented in 2014 during Art Basel Miami Beach at the MDC Museum of Art + Design, as well as the Crow Collection of Asian Art in Dallas, TX, and in 2015 in London’s Fine Art Society and The Tucson Museum of Art in Arizona. (Photo credit: Shen Wei and Untitled No. 31, 2015. Oil and acrylic on canvas. H185 x W363cm. Collection of the Artist.)