Outcomes of the 2022 US Midterm Elections

Breakfast Briefing for all 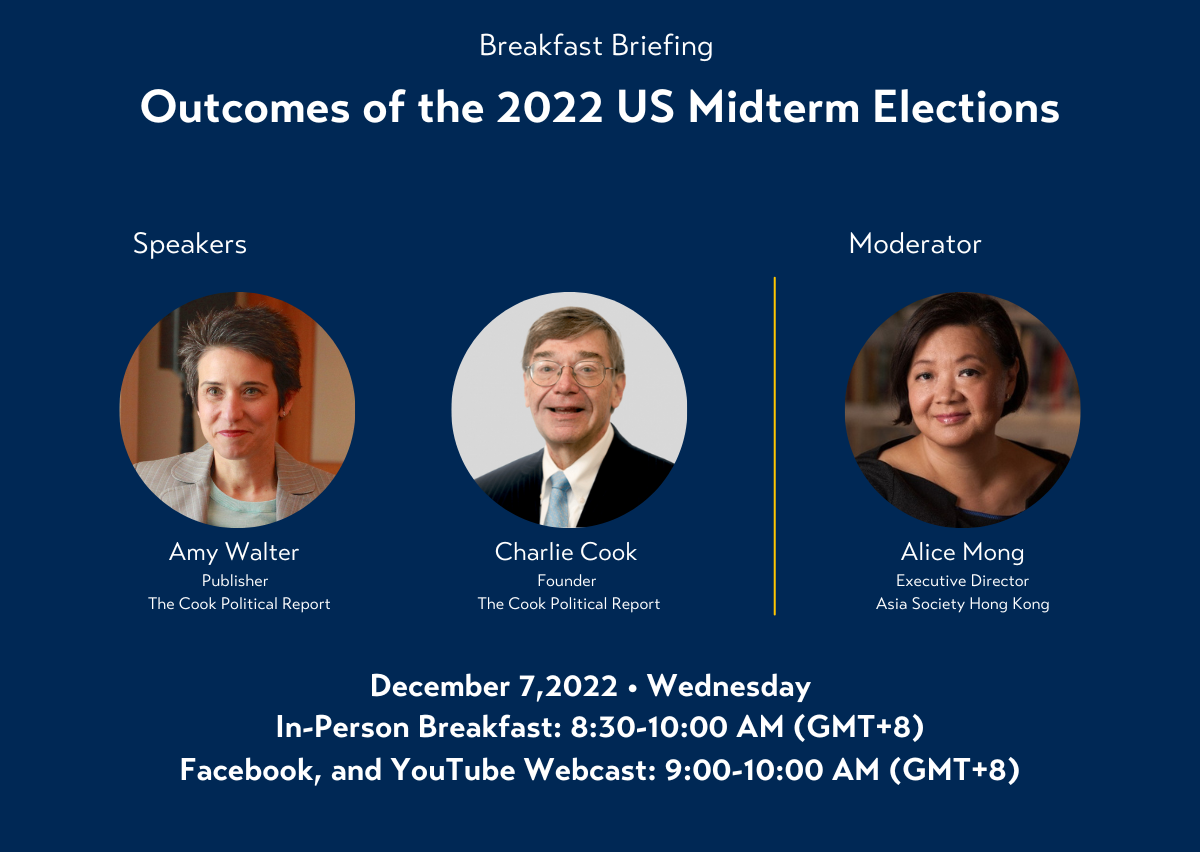 Join via Zoom
(Members Only)

Got Questions? Ask them here in advance (beginning Dec 01) or during the program:

On November 8, the United States held its latest round of midterm elections to determine control of the US Congress and State governments, and for some States, the future of issues ranging from abortion rights to the legalization of marijuana. The results bucked decades-old trends for midterm elections and defied conventional wisdom about the Democrat’s political fate. What do the outcomes of this election mean for the US political landscape? What happened to the expected “Red Wave” during this midterm election cycle? What trends will emerge as we head toward the 2024 Presidential election?

For more than 25 years, Amy Walter has built a reputation as an accurate, objective, and insightful political analyst with unparalleled access to campaign insiders and decision-makers. One of Washington's Most Powerful Women in 2021, she is the Publisher and Editor-in-Chief of the Cook Political Report with Amy Walter, where she provides analysis of the issues, trends and events that shape the political environment.
A contributor to the PBS NewsHour, she provides weekly political analysis for the popular “Politics Monday” segment and is a featured contributor for their Election and Convention special coverage events. She is also a regular Sunday panelist on NBC’s Meet the Press and CNN’s Inside Politics and appears frequently on Special Report with Bret Baier on Fox News Channel. From 2017 until early 2021, Walter was the host of the weekly nationally syndicated program Politics with Amy Walter on The Takeaway from WNYC and PRX. She’s also the former political director of ABC News.
Amy was an inaugural fellow at the Institute of Politics at the University of Chicago, where she now serves on the Board of Advisors. She graduated summa cum laude from Colby College, earned an honorary degree as a Doctor of Letters, and serves as a Trustee to the Board.

Charlie Cook is widely regarded as one of the nation’s leading authorities on U.S. elections and political trends. Charlie founded the independent, non-partisan Cook Political Report in 1984, serving as Editor and Publisher until August 1, 2021 when Amy Walter took over those roles, ownership and management of the venerable newsletter. Charlie remains as a contributor to the renamed “Cook Political Report with Amy Walter.”

In addition to lecturing, Charlie continues to write his weekly column and serve as a political analyst for National Journal. Cook is also a co-author of the 2020 and 2022 editions of The Almanac of American Politics.

Al Hunt in the Wall Street Journal has referred to Charlie as “the Picasso of election Analysis” while the New York Times has referred to the Cook Political Report as “a newsletter that both parties regard as authoritative.” In 2010, Charlie was the co-recipient of the American Political Science Association’s prestigious Carey McWilliams award to honor “a major journalistic contribution to our understanding of politics.” In 2013 Charlie served as a Resident Fellow at the Institute of Politics at Harvard’s Kennedy School of Government.

S. Alice Mong is the Executive Director of Asia Society Hong Kong Center (ASHK), an independent non-governmental educational organization established in 1990, since August 2012. She served as a consultant to ASHK in preparation for the February 2012 opening of its permanent home at the Former Explosives Magazine in Admiralty.

Prior to ASHK, Ms. Mong worked in New York for almost a decade in the non-profit sector in senior management positions. She was the Director of the Museum of Chinese in America (MOCA) from 2009 to 2011, overseeing the expansion project of the 30-year-old organization. She stepped down as Museum Director in July 2011 after successfully transforming the museum from a New York Chinatown institution into a leading national museum dedicated to preserving and presenting the history, heritage, culture and diverse experiences of people of Chinese descent in the United States. Ms. Mong also served as the Executive Director for the Committee of 100 in the United States, a Chinese-American non-profit membership organization founded by architect I.M. Pei and cellist Yo-Yo Ma. She began her career at the Ohio Department of Development in Ohio, and later became Managing Director of the Ohio Office of East and Southeast Asia in Hong Kong. Ms. Mong worked for Hang Lung Property Group from 1995 to 2002. She serves as a Member of the Board of Directors of The Ohio State University Alumni Association.