Money Games: The Inside Story of How American Dealmakers Saved Korea’s Most Iconic Bank   | Asia Society Skip to main content

Money Games: The Inside Story of How American Dealmakers Saved Korea’s Most Iconic Bank 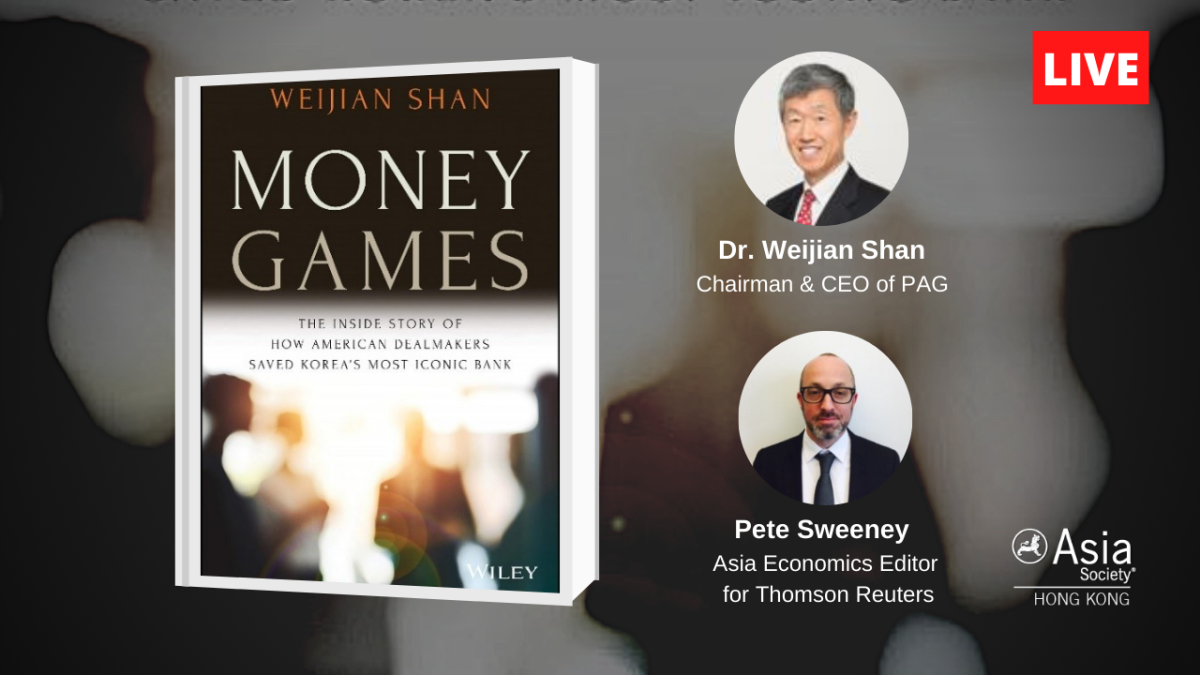 Money Games is a compelling tale of one of the most successful buyout deals ever. Dr. Weijian Shan, celebrated author and private equity investor, gives the insider’s account as the chief architect of this deal. Readers are taken through intrigue and suspense at every turn as they learn of the events leading to the acquisition and turnaround of what used to be Korea’s largest bank by the American firm, Newbridge Capital. With billions of dollars at stake, and the nation's economic future on the line, Newbridge Capital became the first foreign firm in history to take control of one of Korea’s most beloved financial institutions. In a conversation with Pete Sweeney, Asia Economics Editor at Thomson Reuters and Dr. Shan will share the captivating tale of how this high-stakes deal transformed into a massively profitable investment—and the legacy it left behind.

Dr. Weijian Shan is Chairman and CEO of PAG, a Hong Kong based private equity firm with $40 billion in capital under management. His firm invests throughout Asia and beyond. Prior to PAG, he was a partner of TPG, and co-managing partner of TPG Asia (formerly known as Newbridge Capital). Previously, Shan was a managing director of JP Morgan, and an assistant professor at the Wharton School of the University of Pennsylvania. He holds an M.A. and a Ph.D. from the University of California, Berkeley, and an M.C.A from the University of San Francisco. He studied at Beijing University of International Business and Economics where he also taught as a faculty member. Shan is the author of Money Games: The Inside Story of How American Dealmakers Saved Korea’s Most Iconic Bank, Out of the Gobi: My Story of China and America, 《走出戈壁》 and of many commentaries published in the Financial Times, the New York Times, the Wall Street Journal, Foreign Affairs, and others.

Pete Sweeney is Asia Economics Editor for Thomson Reuters. He joined Reuters Breakingviews in Hong Kong in September 2016. Previously, Sweeney served as Reuters' Chief Correspondent for China Economy and Markets, running teams in Shanghai and Beijing; before that he was editor of China Economic Review, a monthly magazine focused on providing news and analysis on the mainland economy. Sweeney came to China as a Fulbright scholar in 2008, and in that role conducted research on the Chinese aviation industry and outbound M&A. In prior incarnations he helped resettle refugees in Atlanta, covered the European Union out of Brussels, and took a poorly timed swing at craft-beer entrepreneurship in Quito even as the Ecuadorean currency collapsed (not his fault). He speaks Mandarin Chinese, at the expense of his Spanish.

A signed copy of the book will be sent to every paid registrant for the off-the-record session.

* IMPORTANT UPDATE: The signed books will  now be delivered AFTER the program - potentially December as the publisher has no more books in stock for now.