Migrant Workers in China: Hukou, Hope and Beyond 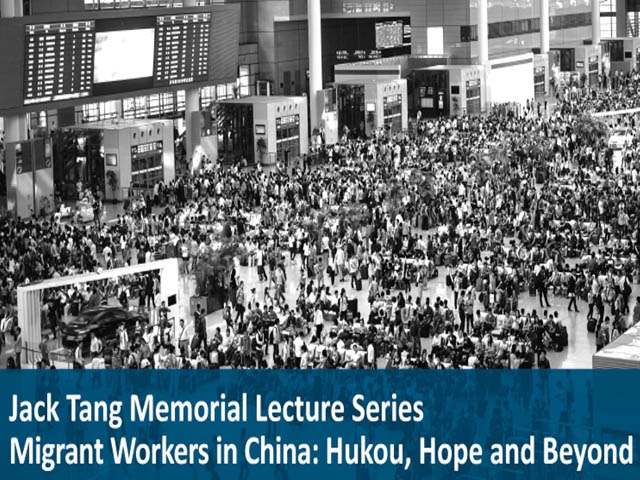 The household registration system - or the hukou - has been central to society in China for decades, originally designed to limit mass migration from the countryside to the cities and ensure structural stability to the country post-1949. Since the economic reforms three decades later, the hukou has also evolved, allowing rural residents seek employment in urban areas. Today there are over 270 million rural migrant workers and their families in urban China without access to basic social services such as public education or healthcare. While the economy continues to expand, the inequality gap and poverty within urban areas has also become more pronounced, giving rise to growing social concern. Coupled with this, there are also 60 million children who are “left behind” by their migrant worker parents in rural China, cared for by elderly grandparents or relatives. To address this, the Chinese government in 2014 announced an ambitious plan to issue 100 million urban hukous to migrant workers by 2020.

However, the new points-for-hukou system favors the more educated and skilled, with commentators pointing out that while it is overall a positive government move, it does not address the gaps in education, income and inequality within the urban population. How beneficial is the new urbanization plan and can it adequately address the vicious cycle of poor education, low income and non-eligibility of urban hukou for migrant workers? Will this new policy help alleviate the growing poverty and inequality gap? How can the Central, municipal and local governments as well as non-governmental organizations work together to improve the livelihoods of migrant worker families? How can these fast expanding megacities become more inclusive and sustainable? Ultimately, what hope do migrant workers have?

Ines Kaempfer, Executive Director, Center for Child Rights and Corporate Social Responsibility (CCR CSR)
Ines Kaempfer is Executive Director of CCR CSR, a social enterprise that works directly with businesses and their suppliers to drive sustainable change and improve the lives of children, young workers and parent workers across Asia. As Executive Director, she leads the design and implementation of overall operations and stakeholder engagement, working closely with major multi-national clients. Ms. Kaempfer has extensive experience in CSR supply chain management, where her main focus has been on child rights and labor rights in the manufacturing and textiles industry in China and South and Southeast Asia. Ms. Kaempfer was previously Director of Learning and Impact at ELEVATE Limited, a CSR learning and capacity building consultancy and Director of Assessment, Capacity Building and Training at the Fair Labor Association.

Tien Ching, Founder and President, Educating Girls of Rural China (EGRC)
Tien Ching founded EGRC in 2005, an organization dedicated to changing the lives of rural Chinese girls through the gift of education. Operating at grassroots level in rural regions of Western China, EGRC has provided financial sponsorship and support to 698 girls and young women with their high school and university education, with a graduation rate of over 99 percent. Ms. Tien is a passionate advocate of education for women and speaks regularly on the topic. Born and raised in Beijing, she was forced out of school during the Cultural Revolution and sent to work in a chemical factory in Gansu for eight years. She later moved to Vancouver where she owned and managed an art gallery for more than 20 years.

Yin Chengzhi, Deputy Director, Policy Research Office, Tsinghua University
In addition to serving as Deputy Director of the Policy Research Office at Tsinghua University, Yin Chengzhi is Executive Director of the Master of Development Practice (MDP) Program and Associate Professor in the School of Public Policy and Management where he teaches urbanization and social development. Prof. Yin is an expert on the regulation of urban and rural development in China, and his research focuses on urban and regional planning as well as urban governance. He is a German Chancellor Fellow of the Alexander von Humboldt Foundation and a member of the Beijing Urban Management Society. Prof. Yin holds double Ph. D. degrees in human geography from Peking University and urban planning from the University of Stuttgart.

Ronnie C. Chan, Co-Chair, Asia Society (Moderator)
Ronnie C. Chan is Chairman of Hang Lung Properties. He is also Co-Chair of the Asia Society and Chairman of the Asia Society Hong Kong Center. In addition, Mr. Chan serves as Chairman of the Better Hong Kong Foundation, Governing Board member of the China-United States Exchange Foundation, Advisor and former Vice President of the China Development Research Foundation in Beijing. He is Director of the Board of the Peterson Institute for International Economics, member of the Council on Foreign Relations and former member of the governing boards of the World Economic Forum. Mr. Chan holds an M.B.A. from the University of Southern California.

The Jack Tang Memorial Lecture Series pays tribute to Dr. Jack Tang, a founder of the Asia Society Hong Kong Center, and honors his legacy as a prominent business leader, educator, and philanthropist. Dr. Tang believed strongly in providing opportunities for the next generation and was an ardent supporter of numerous education initiatives in the US and China.