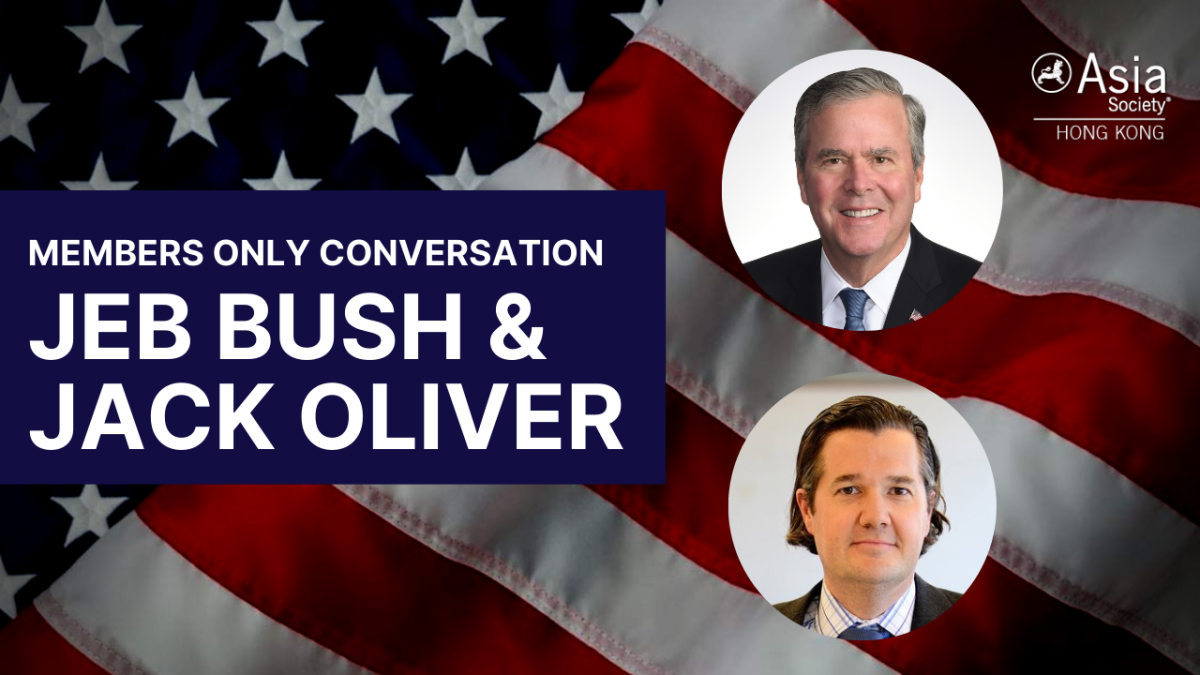 Very few people in the world understand Washington D.C. and American politics as well as these two!

On October 29, less than a week before the US presidential election, join us at ASHK for this members exclusive webcast chat with the 43rd Governor of Florida, Jeb Bush, and the man TIME Magazine once described as being largely responsible for “the most formidable money machine in modern political history,” Jack Oliver.

They will share their unparalleled insights on the various possible outcomes of the Presidential Election (and what policies may be up for debate), outcomes of the Congressional Elections / Governor Elections, swing states, key elections to watch, future leaders of both parties and more! The general discussion will be 40 minutes long, from 20:20 to 21:00 PM HKT.  President’s Circle and Corporate Members will also be invited to join an exclusive 20 minute virtual meet-and-greet with our two special guests from 20:00 PM HKT.

Jeb Bush is the 43rd governor of the State of Florida, serving from 1999 through 2007. He was the third Republican elected to the state’s highest office and the first Republican in the state’s history to be reelected. He was most recently a candidate for the Republican presidential nomination in 2016.

Governor Bush remained true to his conservative principles throughout his two terms in office – cutting nearly $20 billion in taxes, vetoing more than $2.3 billion in earmarks and reducing the state government workforce by more than 13,000. His limited government approach helped unleash one of the most robust and dynamic economies in the nation, creating 1.3 million net new jobs and improving the state’s credit ratings, including achieving the first ever triple-A bond rating for Florida. During his two terms, Governor Bush championed major reform of government, in areas ranging from health care and environmental protection to civil service and tax reform. His top priority was the overhaul of the state’s failing education system. Under Governor Bush’s leadership, Florida established a bold accountability system in public schools and created the most ambitious school choice programs in the nation. Today, Florida remains a national leader in education and is one of the only states in the nation to significantly narrow the achievement gap.

Governor Bush is also known for his leadership during two unprecedented back-to-back hurricane seasons, which brought eight hurricanes and four tropical storms to the state of Florida in less than two years. To protect the state from loss of life and damage caused by catastrophic events, such as hurricanes, Bush worked tirelessly to improve the state’s ability to respond quickly and compassionately during emergencies, while also instilling a ‘culture of preparedness’ in the state’s citizenry. Governor previously served as a Presidential Professor of Practice at University of Pennsylvania. He also served as a visiting professor and fellow at Harvard University, an executive professor at Texas A&M University, and has been awarded several honorary doctorates from collegiate institutions across the country. Governor Bush has been recognized for his contributions to public policy by national organizations including the Manhattan Institute, The Lynde and Harry Bradley Foundation and the Jack Kemp Foundation. Governor Bush earned his bachelor’s degree in Latin American Studies from the University of Texas at Austin.

Governor Bush currently serves as Chairman of Finback Investments Partners LLC and Dock Square Capital LLC, both merchant banks headquartered in Coral Gables. Governor Bush maintains his passion for improving the quality of education for students across the country by serving as the Chairman of the Foundation for Excellence in Education, a national nonprofit education reform organization he founded to transform education in America.

He has written three books, Profiles in Character; Immigration Wars: Forging an American Solution; and Reply All: A Governor’s Story 1999-2007. Governor Bush lives in Miami with his wife Columba. They have three children and four grandchildren.

Jack Oliver works across the highest levels of international and national politics, government, technology, finance and business to provide senior relationship management and unparalleled insights at the intersection of public policy, communications, innovation and commerce. Currently, Jack is a Managing Partner of Finback Partners, a merchant bank based in Miami, Florida, and serves as an attorney and Practice Group Leader of the international law firm Bryan Cave Leighton Paisner LLP.  Additionally, he is a Senior Advisor to companies including 8vc, Palantir Technologies, OpenGov, Addepar, Leeo, and Rubicon Global, and serves on the Board of Directors for E-Health Corporation and Gateway Blend.

For 13 years Jack served as Senior Advisor to Barclays, providing counsel for top clients across investment banking and capital markets management. He served for two years as Co-Chairman of the ONE Campaign, an organization founded by U2's Bono to raise public awareness about global poverty. Earlier in his career, Jack served as National Finance Vice-Chairman for Bush-Cheney 2004 and as Deputy Chairman and CEO of the Republican National Committee In 2000, Jack was National Finance Director for George W. Bush’s 2000 presidential campaign, leading an historic effort that shattered all previous presidential fundraising records.

Jack graduated from Vanderbilt University and earned a law degree from the University of Missouri at Columbia.

Thu 29 Oct 2020
8 - 9 p.m.
Hong Kong Time
Calculate your local time »
Register Now
20201029T200000 20201029T210000 Asia/Hong_Kong Asia Society: Members Only Conversation with Jeb Bush & Jack Oliver Very few people in the world understand Washington D.C. and American politics as well as these two! On October 29, less than a week before the US presidential election, join us at ASHK for this members exclusive webcast chat