Lunchtime Concert: From Vienna to Budapest 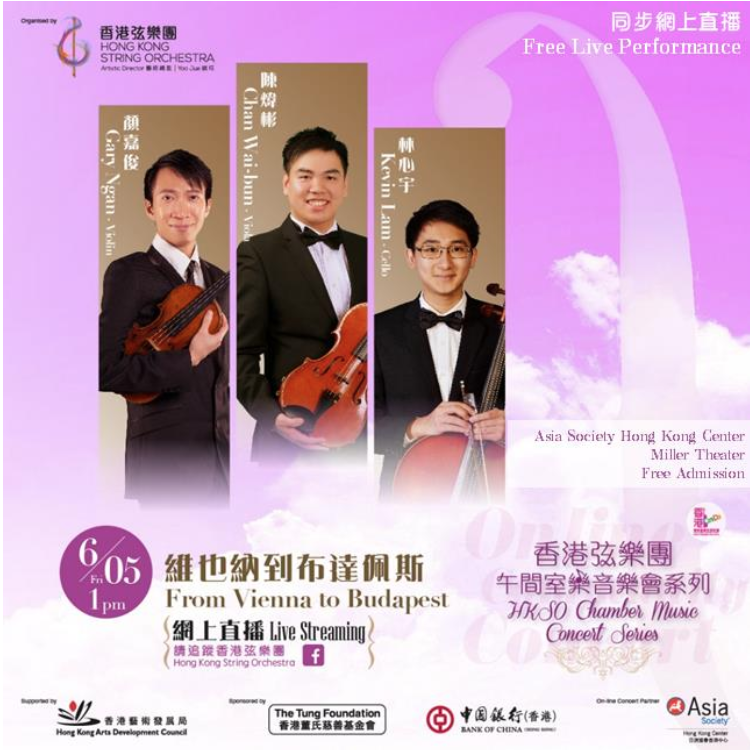 What connects Vienna and Budapest is not just the Danube River, but also the history of Western music. Vienna, the Capital of Classical Music, nurtures a lot of composers including Haydn, Beethoven and Schubert. Enriched by the musical culture of Vienna, Schubert composed this String Trio in B-flat major during his prime time on creation, showing the strong influence of Mozart and heralding the style of Romantic Period. Dohnányi from Budapest followed the movement of the Romantic period, earning himself a place in Hungary, where nurtured plenty of great 20th Century composers such as Kodály and Bartók.

Gary Ngan has performed concerts and recitals extensively in over 70 cities across Asia, North Africa, Europe, the North and South Americas on both modern and baroque violin. A graduate of Yale University and Eastman School of Music, Gary also studied baroque violin and chamber music at Hochschule für Musik, Theater und Medien in Hannover. He is the First Prize winner at the Eastman Concerto Competition, Montserrat Competition, and Vinaròs International Chamber Music Competition in Spain, and holds a Fellowship Diploma from Trinity College, London.

Chan Wai Bun received his undergraduate musical training at The Chinese University of Hong Kong, studying viola performance with Ricardo Zwietisch. Supported by a scholarship, he then completed the Guildhall Artist Master programme under the tutelage of Matthew Jones in the Guildhall School of Music and Drama in London. He is one of the founding members of a local chamber music group The TimeCrafters.

Graduate of Royal Academy of Music where he was also appointed as assistant principal cellist, Kevin Lam is one of the rising-star cellists in Hong Kong. Obtaining Fellowship of Trinity College (FTCL) in piano and cello at the age of 14 and 15 respectively, Kevin studied cello with masters including Professor Lionel Handy, Prof. Walther Schulz and Prof Chu Yi Bing. Kevin won numerous scholarships and local competitions, before his success in the Wolfe Wolfinsohn String Quartet Prize Competition at the Royal Academy of Music and Washington DC International Music Festival etc.