Linking Asia and the EU

General Drinks Reception for all, Dinner for President’s Circle and Corporate Members 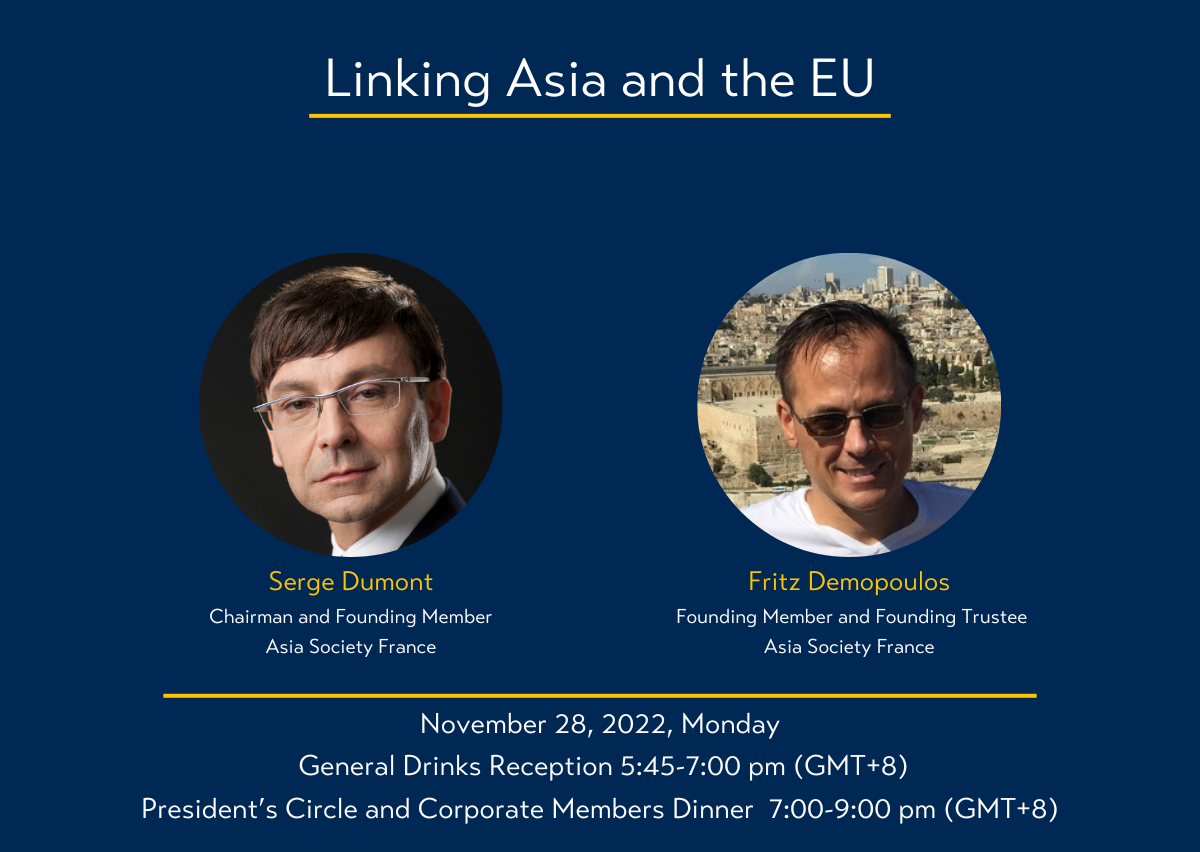 At a time when the world feels increasingly divided, Asia Society France was launched to reinforce the links connecting Asia with the European Union, and to advance Asia Society’s mission to navigate shared futures for Asia and the world.

Serge Dumont is the co-founder and Chairman of Asia Society France and Vice Chairman of ImpactWayv Inc. and has lived in Beijing, Hong Kong, and Taipei for over 40 years. A specialist in international issues and strategic communications, Serge draws on decades of experience in Asia, the United States, and Europe. He has regularly advised multinational companies, business leaders, and boards of leading institutions.

In the early 1980s, Serge founded China's first independent public relations and public affairs consulting group. A young entrepreneur at the time, he is now credited with leading China's growing communications industry, having served companies such as Edelman (as EVP and Board Member), and Omnicom Group (NYSE, OMC), a global communications and marketing holding company of which he was Vice Chairman and Chairman Asia Pacific.

With a strong knowledge of the Asian, European, and American markets, Serge strives to bring an international perspective to his activities. As a global citizen, his role is not limited to business. As a philanthropist, he is particularly involved in the fields of health and education. He is also convinced that a company's objective should not stop at making a profit, as social responsibility is an integral part of business success.

Serge has received several awards and distinctions from governments and international organizations for his commitments in the areas of business, philanthropy, health, culture, and education. He has also served as a Goodwill Ambassador for the United Nations.

He serves on the boards of several corporations, educational institutions, and non-profit organizations. He is fluent in English, Mandarin, and French.

Fritz Demopoulos has been involved in the Asian region for over 20 years as a technology entrepreneur and investor.  Fritz co-founded Qunar.com, China’s largest travel platform, which was listed on the NASDAQ in 2013. He also co-founded Shawei.com, China’s largest digital sports media company, which was acquired by Hutchison Whampoa affiliate Tom.com. Previously, he held senior executive positions at The News Corporation and Netease. Fritz coordinates his entrepreneurial business activities through Hong Kong-based Queen’s Road Capital.  Fritz was educated at UCLA, the Chinese University of Hong Kong, and the University of Heidelberg in Germany. He is a member of the Global Board of Trustees of the Asia Society in New York, a Trustee of the SETI Institute in Mountain View, a Trustee of Jazz at Lincoln Center, and serves on the Board of Advisors of UCLA’s Department of Earth, Planetary & Space Sciences.  Fritz is a long-term resident of Hong Kong with his wife and two daughters.