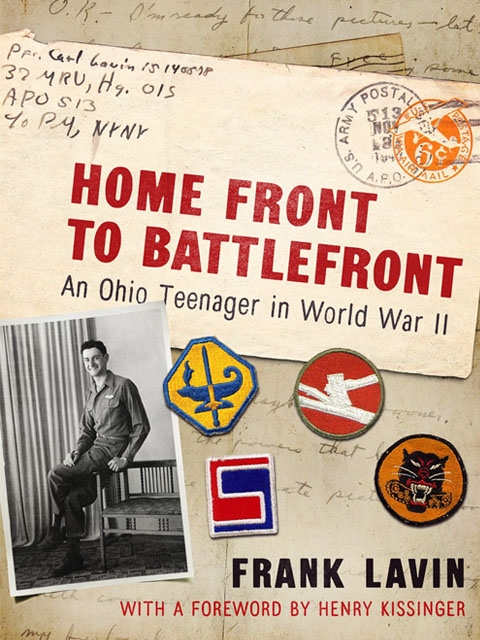 You are invited to a discussion of World War II, as seen through the story of one combat infantryman. Carl Lavin was a high school senior in Canton, Ohio, when Pearl Harbor was attacked. He was 18 when he enlisted, a decision that would take him with the U.S. Army from training across the United States and Britain to combat with the 84th Infantry Division in the Battle of the Bulge. Home Front to Battlefront is the tale of a foot soldier, who finds himself thrust into a world, where he and his unit grapple with the horrors of combat, the idiocies of bureaucracy and the oddities of life back home — all in the same day. The book is based on Carl’s personal letters, his recollections and those of the people he served beside, official military history, private papers and more. Former U.S. ambassador and White House aide Frank Lavin, the son of Carl Lavin is author of Home Front to Battlefront, and joins us for an evening presentation to share personal stories of his father’s experiences in World War II. For more information, please view www.hf2bf.com.

Frank Lavin is CEO and Founder of Export Now, the largest off-shore operator of China ecommerce stores. Mr. Lavin was previously Under Secretary for International Trade at the U.S. Department of Commerce, serving as lead trade negotiator for China and India. Prior to serving in the U.S. Department of Commerce, he was U.S. Ambassador to the Republic of Singapore. In the private sector, Mr. Lavin served in senior finance and management positions at Edelman, Bank of America and Citibank in Hong Kong and Singapore. Previously, he served in the George H.W. Bush and Reagan Administrations, working in the Department of Commerce, Department of State, National Security Council and White House. Mr. Lavin received his B.S. and M.S. from Georgetown University, an M.A. in international relations and economics from the School of Advanced International Studies at Johns Hopkins University and an M.B.A. from the Wharton School, University of Pennsylvania.