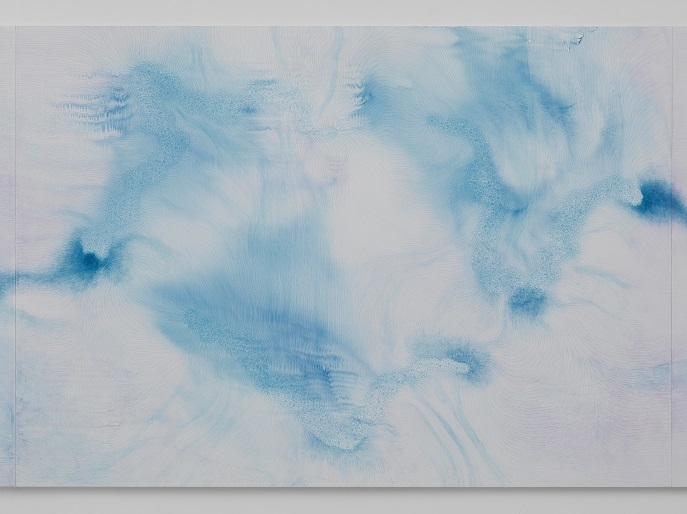 Join us on Friday, March 30th at the Art Central auditorium for this insightful conversation between one of Asia Society’s 2018 Asia Art Award Honoree’s, Shirazeh Houshiary and Senior Curator of Modern and Contemporary Art at Asia Society Museum, Michelle Yun.

Shirazeh Houshiary, a member of the New British Sculpture movement in the 1980s, employs painting, sculpture, and video installations, often incorporating elements of Islamic texts and imagery, including Sufi poetry, as a means to ruminate on the intangible nature of spirituality and our common humanity. Her work was included in the groundbreaking exhibition “Magiciens de la Terre” at the Centre Pompidou, Paris (1989). She has had solo exhibitions at Tate Liverpool (2003) and the British Museum (1997). Her work has been featured in the 57th Venice Biennale (2017); The Museum of Modern Art, New York (2006); Tehran Museum of Contemporary Art (2004); and São Paulo Biennial (1996). Houshiary was shortlisted for the Tate Modern’s prestigious Turner Prize in 1994.

Michelle Yun is Senior Curator of Modern and Contemporary Art at Asia Society Museum. Prior to her appointment to Asia Society, Yun was the curator of the Hunter College Art Galleries. She has previously served as the project director of Cai Guo-Qiang’s studio and as a curatorial assistant in the Department of Painting and Sculpture at The Museum of Modern Art, in addition to organizing numerous independently curated exhibitions. Ms. Yun is also a frequent lecturer on modern and contemporary Chinese art and has taught at SUNY New Paltz, Columbia University, and The Museum of Modern Art.  Her writings have been included in many publications, among them Patti Smith: 9.11 Babelogue, published in conjunction with her exhibition at Hunter College; Cai Guo-Qiang: I Want To Believe, published by the Solomon R. Guggenheim Museum, New York; entries in the Benezit Dictionary of Asian Artists and The Grove Dictionary of Art, Oxford University Press; Greater New York, the 2003 exhibition organized by PS1 and The Museum of Modern Art; and Artforum International.

Click for directions
Free Admission with any Art Central Ticket; Registration not required
20180330T113000 20180330T123000 Asia/Hong_Kong Asia Society: In Conversation with Shirazeh Houshiary Join us for this insightful conversation between one of Asia Society’s 2018 Asia Art Award Honoree’s and the Senior Curator of Modern and Contemporary Art at Asia Society Museum.