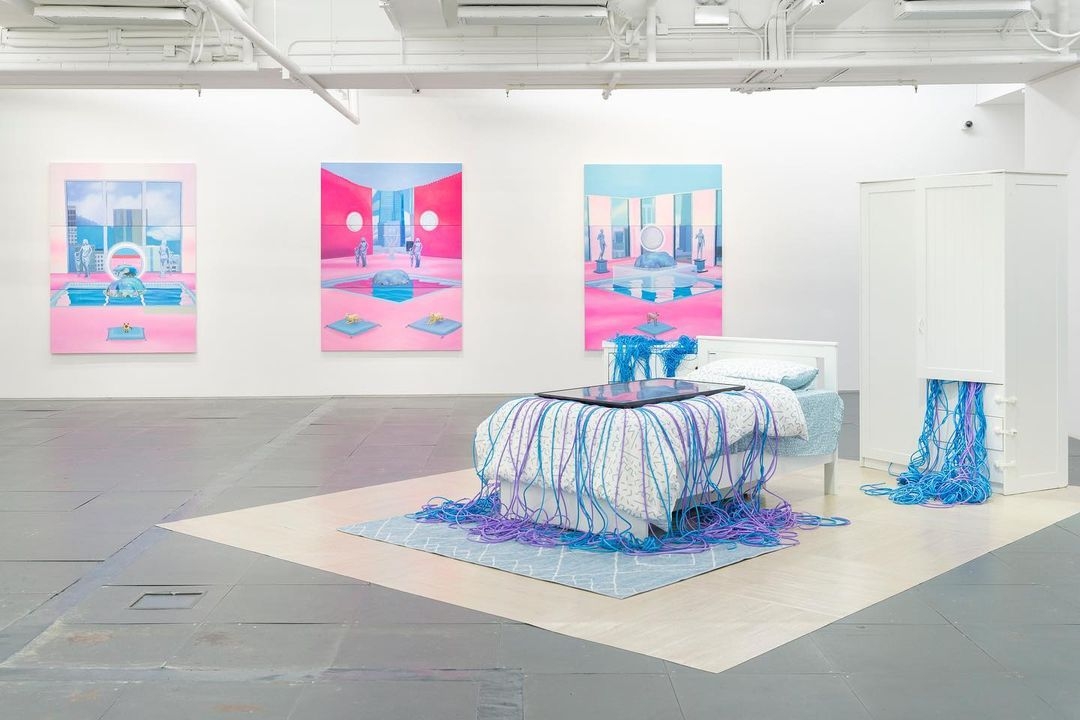 A one-on-one conversation on collector and artist relationships in a digital era with Jacobo Garcia Gil and artist Mak2. As social media influence takes hold of the art market, the gap between artist and collector is shrinking, and with it the potential for global connection grows. Artist Mak2 tackles subcultures of the internet, socio-political discourse and philosophy through humor, installation, painting and video work; while collector and founder of Divide By Zero, Jacobo focuses on socio-cultural works with a curatorial drive aimed at supporting artists grow in their careers. Take a glimpse into the minds of two industry-leaders, revealing their place and path in the art world.

Over the past decade Jacobo Garcia Gil has built an relevant and diverse collection of visual works by both established and newly emerging artists from across Asia and Europe, with a specific focus on contemporary paintings that examine the current socio-cultural climate. His collection, Divide By Zero, is supported by an influential network of leading international gallerists, artists, editors and other collaborators. It’s purpose is to serve as a curatiorial mean to support artists even further. The professional career of Mr. Garcia roots through two decades of investment banking across two continents – Asia and Amercia. Born and raised in Colombia, Mr. Garcia relocated from Peru to Singapore in the early 2000s, and has lived in Asia ever since. In 2008, Mr. Garcia made of Hong Kong his home, and established the Collection therein. Divide By Zero Holdings Limited was established in Hong Kong in 2014, with Mr. Garcia as founder and sole director. In addition to the collection, Mr. Garcia presently sits as docent and founding patron for the M+ Museum in Hong Kong.

Mak Ying Tung 2 (b. 1989, Hong Kong) is a conceptual artist. Her work contemplates 21st-century issues through the study of philosophy, art history, culture, shifting socio-political environments, the Internet, and new technology. The aesthetic experience she crafts is bound by the dualism of humor and intense inquisitiveness. She creates, installations, paintings, drawings, video work, youtube videos, stand-up comedy routines, and Instagram filters.
Her iconic Home Sweet Home (2019-) series are triptychs on canvas that make use of the popular American life simulation video game “the Sims” and are each painted by three separate painters on the Chinese e-commerce platform Taobao. She uses "the Sims" as a virtual construction tool for her ideas of both utopia and dystopia in the context of Hong Kong. In the game, she creates bizarre environments such as bedrooms filled with CCTV cameras, lonely millennial hangout spots, and pools on roofs filled with flowers. She takes screen-captures of these digital fantasies and divides the resultant images into thirds. Each third is subsequently painted by a separate painter found on Taobao, who is given as little instruction as possible. Through fracturing the process of production and allowing external factors to intervene in the actualization of her artwork, Mak 2’s "Home Sweet Home" series not only elucidates the inevitable disparity between fantasy and reality, but it also crafts a comment on authorship, “copy-cat” culture, and the complex narratives that construct her understanding of home.
Mak 2 is also well known for her conceptual installations. Her work You Better Watch Out (2017), was included in an exhibition presented by MoMA PS1 and K11 Art Foundation titled ".com/.cn". Through the use of a giant snow globe, colorful balls, QR codes, and a CCTV camera, the artwork explores the troubling duality between contemporary modes of entertainment and the growth of surveillance states across the globe.
Mak2's artwork has been exhibited internationally in: Mirage or Reality, Shanghai K11 Art Mall, Shanghai, China (2021); The Principle of Hope, Beijing Inside-Out Art Museum, Beijing, China (2021); How Do We Begin?, X Museum, Beijing, China (2020), Home Sweet Home, de Sarthe, Hong Kong, China (2019); We Didn't Mean To Break It (But It's Ok, We Can Fix It), Pedro Cera, Lisbon, Portugal (2019); Whatever Works, Whatever It Takes, Goethe-Institut China, Beijing (2019); The Anything Machine, de Sarthe, Beijing, China (2018); Invisible Cities, Crow Collection of Asian Art, Dallas, USA (2017-18); com/.cn - Co-presented by KAF and MoMA PS1, K11 Art Foundation, Shanghai, China (2017-18); Reversal Ritual, de Sarthe, Hong Kong, China (2017); COMEINSIDE: EAT ME, PingPong 129, Hong Kong, China (2017); COMEINSIDE: BABY SHOWER, Gallery Exit, Hong Kong, China (2017); Artists' Film International, Whitechapel Gallery, London, United Kingdom (2016); The Second "CAFAM-Future" Exhibition, CAFA Art Museum, Beijing, China (2015); Artistic or Autistic - The Seventh
Annual Exhibition, Inside Out Art Museum, Beijing, China (2014); Almost Empty, Gallery Exit, Hong Kong, China (2014); and SOFT OFF: But I love it when your mouth is a little shut, ltd Los Angeles, Los Angeles, USA (2013).
Mak 2 lives and works in Hong Kong.