Bringing Tibet Home tells the story of artist Tenzing Rigdol, as he sets out on a mission to bring Tibet closer to Tibetan exiles through an unprecedented art project titled Our Land, Our People. The installation involves smuggling 20,000 kilos of native Tibetan soil across the Himalayas from Tibet into India, while spanning the borders of three countries. The soil is laid out on a platform set up in Dharamsala, India where it will give the chance to thousands of exiled Tibetans to walk on their home soil. For many, this is a reunion, for some, it will mark the first time that they have set foot on their homeland, and for a few, this is probably the last time that they will ever see any part of their lost nation.

Through this groundbreaking site-specific installation, artist Tenzing Rigdol enables the displaced to ‘return’ home. Although Rigdol’s work examines the plight of the Tibetan people in exile, it also has a wider resonance, exploring the notion of nostalgia, the idea of homeland and how art is intertwined with the political and the social. It also demonstrates the transgressive power of art as an act of defiance. The screening will be followed by a conversation with the artist. 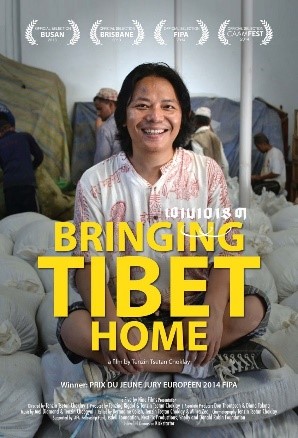 Tenzing Rigdol is a contemporary Tibetan artist whose work ranges from painting, sculpture, drawing and collage, to digital, video-installation, performance art and site-specific installations. His artistic output is the product of collective influences and interpretations of age-old traditions; it is informed by philosophy and often captures the ongoing issues of human conflicts. Born in 1982 in Kathmandu, Nepal, Rigdol and his family were granted political asylum in the USA in 2002. Rigdol has extensively studied Tibetan sand painting, butter sculpture and Buddhist philosophy in Nepal. In 2003 he earned a diploma in traditional Tibetan thangka painting and in 2005 he was awarded a BFA in Painting and Drawing and a BA in Art History at the University of Colorado, USA. The artist is also an accomplished poet, having published three collections. Rigdol has been widely exhibited internationally and his artworks are included in public and private collections around the world. In 2014, his work Pin Drop Silence: Eleven-Headed Avalokitesvara was also the first work by a contemporary Tibetan artist to be acquired by The Metropolitan Museum of Art.

The artist is represented by Rossi & Rossi, Hong Kong and London.