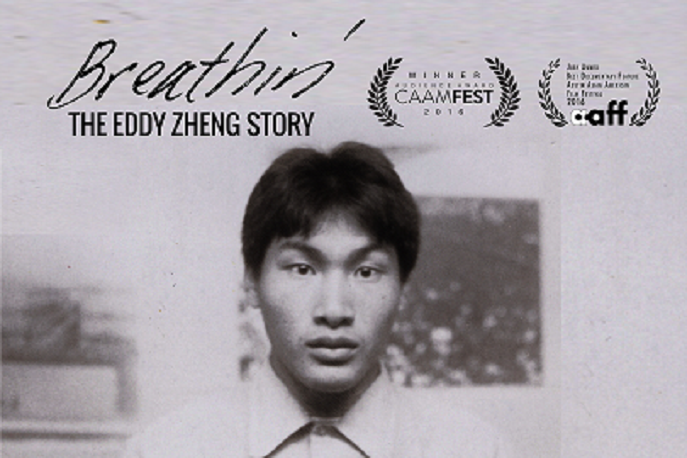 Arrested at 16 and tried as an adult for kidnapping and robbery, Guangzhou-native Eddy Zheng served over 20 years in California prisons and jails. Ben Wang’s documentary paints an intimate portrait of Eddy — the prisoner, the immigrant, the son, the activist — on his journey to freedom, rehabilitation and redemption. Breathin' won the Audience Award for Documentary Feature at CAAMFest, Jury Award for Best Documentary and Audience Award for Best Documentary at the Austin Asian American Film Festival, and the Jason D. Mak Social Justice Award at the DisOrient Asian American Film Festival of Oregon. The screening will be followed by a Q&A with Eddy Zheng and Director Ben Wang moderated by Academy Award winning filmmaker and head of the Hong Kong Documentary Initiative at Hong Kong University, Ruby Yang.

At the age of 12, Eddy Zheng and his family immigrated to California from China. Socioeconomic struggles, language and cultural barriers as well as childhood traumas led to Eddy getting involved in criminal activities as a teenager. At 16, Eddy pled guilty to kidnapping to commit robbery and sentenced to life in prison. While in prison, Eddy learned English, earned his college degree, published his poetry and transformed into a nationally recognized leader — inspiring youth, activists and politicians on issues of prison reform and youth violence prevention. Eddy was granted parole in 2005 and unconditionally pardoned in 2015. He became a U.S. citizen in 2017. Eddy is the founder and director of the New Breath Foundation which seeks to transform individuals, communities and philanthropy by addressing issues of trauma, stigma and shame in the Asian-American community.

Ben Wang is a documentary filmmaker and the Director of Breathin’: The Eddy Zheng Story.  He met Eddy Zheng in 2003 while studying at the University of California, Davis during Eddy’s 18th year of incarceration. Ben’s previous films include AOKI (Co-directed with Mike Cheng) and MAMORI (Director). He has also co-edited Other: an API Prisoners’ Anthology, the first book to document first-hand narratives of incarcerated Asian-American prisoners, now taught in U.S. colleges. He is the Co-director of the Asian Prisoner Support Committee, which provides direct support to Asian American and Pacific Islander prisoners and raises awareness about the impact of mass incarceration on our communities. He serves on the Board of Directors of the New Breath Foundation.

Filmmaker Ruby Yang will moderate the Q&A with Eddy & Ben. She has worked as director, producer and editor on a range of feature and documentary films exploring Chinese themes. She won an Academy Award for Documentary Short Subject for The Blood of Yingzhou District in 2007. She is also known for her feature documentary Citizen Hong Kong and the award-winning documentary My Voice, My Life.