Around the World in 45 Minutes 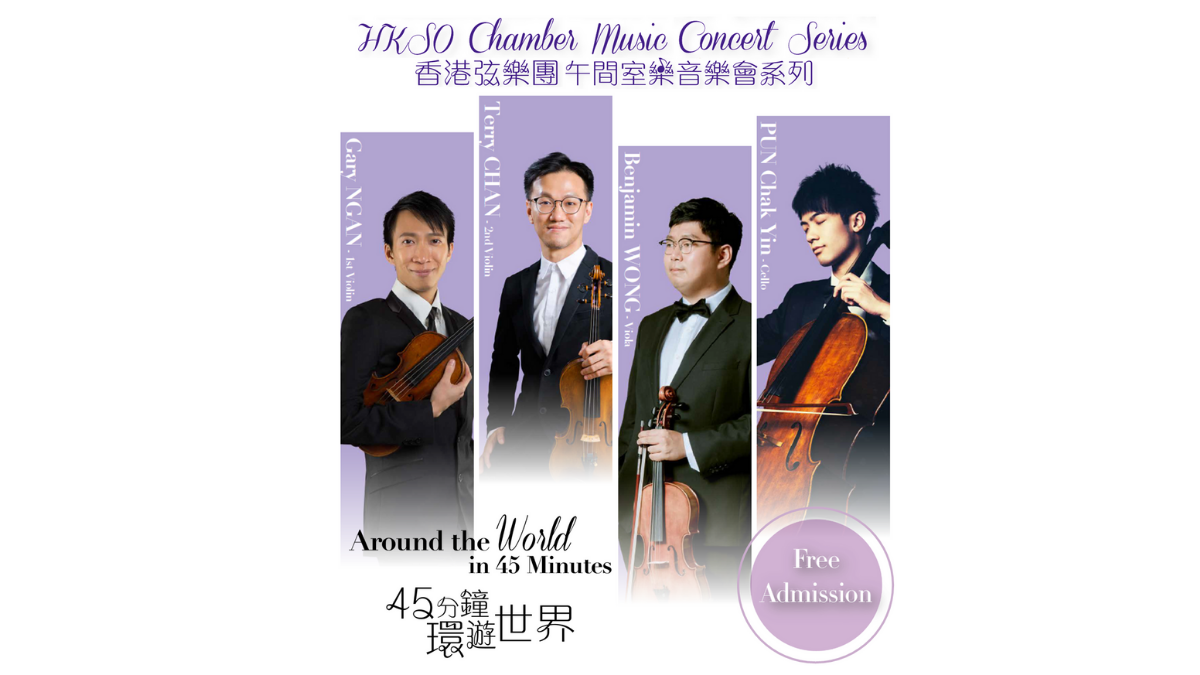 *Please note the program will be held at our Lippo Amphitheater, a semi-outdoor area, so please do dress up warmly.*

You may have read the book ‘Around the World in 80 days’ and Phileas Fogg successfully did it by transport, how about we bring you Around the World in 45 minutes by classical music? Our quartet selected music from different continent, including Asia, Europe, North and South America and Africa, to explore different cultures and widen ours horizon. Let our musicians be your guide and show you the world through this exotic yet unique and diverse program!

Gary Ngan has performed concerts and recitals extensively in over 70 cities across Asia, North Africa, Europe, the North and South Americas on both modern and baroque violin. A graduate of Yale University and Eastman School of Music, Gary also studied baroque violin and chamber music at Hochschule für Musik, Theater und Medien in Hannover. He is the First Prize winner at the Eastman Concerto Competition, Montserrat Competition, and Vinaròs International Chamber Music Competition in Spain, and holds a Fellowship Diploma from Trinity College, London.

Terry Chan began violin study with Jason Ho and Piano Study with Barbara Chen at his early age. In 2004, he entered the Hong Kong Academy for Performing Arts (HKAPA) to study violin performance under Leung Kin-Fung. After his graduation, he continued his violin study in the United States with Professor Piotr Milewski and received his Master of Music in Violin from the College-Conservatory of Music, University of Cincinnati (CCM). He is currently a candidate for the Doctor of Musical Arts in CCM. Terry has performed with many different organizations in Hong Kong including the Hong Kong Philharmonic, Macau Orchestra, City Chamber Orchestra of Hong Kong.

Benjamin Wong graduated with honours from the Yong Siew Toh Conservatory of Music of National University of Singapore where he studied under Associate Prof. Zhang Manchin, Principal Violist of the Singapore Symphony Orchestra, after being awarded full scholarships. Benjamin has taken masterclasses with many international artists such as Paul Silverthorne, Yizhak Schotten and David Erlich. As a chamber musician, he was finalist in the Asia Pacific Chamber Music Competition and has participated in chamber music festivals in France and the Czech Republic.

Pun Chak Yin received his Bachelor of Music degree from The Hong Kong Academy for Performing Arts in 2015, under the tutelag e of cellist Karey Kwok. A recipient of the Mary Stuart Harding Entrance Award, he completed his Master of Arts degree in cello performance at Royal Academy of Music in 2017, where he studied with David Strange. Chak Yin attended masterclasses with cellists including Li Jiwu, Bion Tsang, Zhu Yibing, Jens Peter Maintz and Colin Carr, and performed in music festivals and projects such as Musicus Festival and the Modern Academy 2015.

Click for directions
Register Now
Free Admission, online registration required
20191213T123000 20191213T133000 Asia/Hong_Kong Asia Society: Around the World in 45 Minutes Travel around the World in 45 minutes by classical music with HKSO! Our quartet selected music from different continent, including Asia, Europe, North and South America and Africa, to explore different cultures and widen ours horizon.