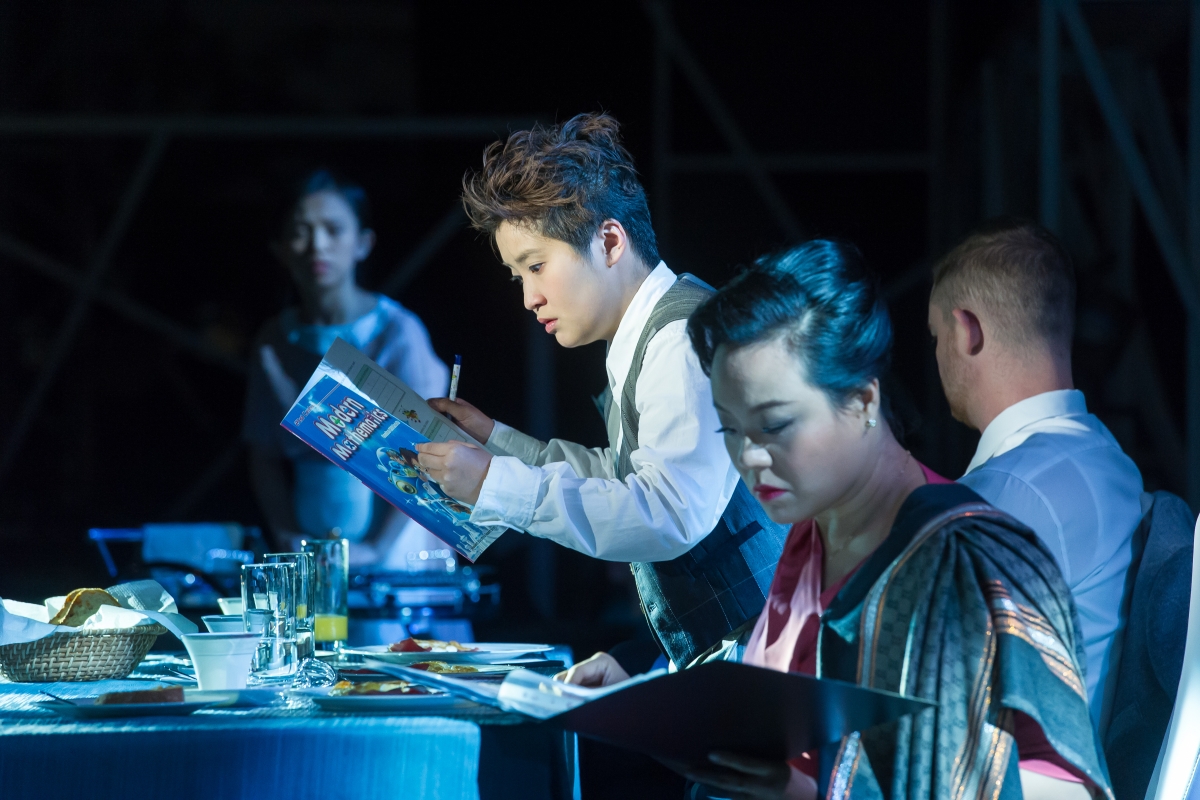 San Francisco, August 6, 2019 – Mila, an original chamber opera exploring the cultural richness and diversity of Hong Kong that played in a four-night run at Asia Society Hong Kong Center to great acclaim in January 2018, will have its North American premiere in December 2019 in conjunction with Asia Society New York and San Francisco. Performances will take place at the Angel Orensanz Center in New York City (December 7) and the Wilsey Center for Opera in San Francisco (December 12). These performances are presented by the Hong Kong Arts Development Council in collaboration with Asia Society.

Mila, a 70-minute one-act opera in four scenes, is the product of an international creative team including the American-born composer Eli Marshall, the prominent Hong Kong playwright Candace Chong Mui Ngam, award-winning theatre director Chu Hei Chan, and New York-based music director Neal Goren leading the Hong Kong Music Ensemble. The performance will be sung in English, Cantonese and Tagalog by a cast of performers from Hong Kong, Manila and the United States.

“This original chamber opera is part of our mission to provide a platform for local talents to collaborate with seasoned international artists in creating new and innovative works,” said S. Alice Mong, Executive Director of Asia Society Hong Kong Center. “It celebrates the coming of age of Hong Kong’s growing pool of creative talents while also examining and raising awareness of some of its unique social issues. We are proud to be sharing this creation with our fellow Asia Society chapters.”

Named after the story’s protagonist, Mila explores the tensions and relationships within a Hong Kong family—an American husband, his Cantonese wife and their son—and their domestic helper Mila from the Philippines. Despite marital tension in the home and her employers’ growing distrust, Mila remains dedicated to her Hong Kong family, soon noticing and becoming troubled by their child’s precarious mental state—a situation that touches an old wound from her past.

Mila brings to light Hong Kong’s pressure-cooker social environment, examining the territory’s tensions in a 70-minute intersection of home life and the workplace, with a glimpse at the culture’s all-consuming educational rigor. The opera was originally commissioned to celebrate Asia Society Hong Kong Center’s sixth anniversary on the site of the former armory of Hong Kong’s Victoria Barracks in Admiralty.

About the Creative Team

Eli Marshall’s orchestral works have been performed in seven countries, with other works premiered at the German Parliament, South Korea’s Gak-won temple, and the Smithsonian Institution. He moved to China in 2003 on a Fulbright Fellowship and in 2011 relocated to Hong Kong, where he remains a permanent resident. After his Unde Pendet Aeternitas for voice and orchestra (written for tenor Warren Mok and the Macau Orchestra) won ASCAP’s 2007 Kaplan Prize, Marshall contributed to the score for Wong Kar-wai’s 2008 Ashes of Time—Redux featuring Yo-Yo Ma. His music for Ann Hui’s The Golden Era (2014), featuring the London Symphony Orchestra and vocalist and wind instrument virtuoso Wu Tong, was nominated for Best Original Film Score at the 35th Hong Kong Film Awards. A recipient of the Douglas Moore Fellowship for American Opera, he was the founding artistic director of the Beijing New Music Ensemble and currently holds a visiting faculty position at Cornell University.

One of the South China Morning Post’s 25 most inspirational and influential women in Hong Kong, playwright Candace Chong is a recipient of the Hong Kong Arts Development Council’s Best Artist Award for Drama in 2010 and a five-time winner of the Hong Kong Drama Awards for Best Script. Following a 12-month stay in the U.S. facilitated by an Asian Cultural Council grant, she became the translator for David Henry Hwang’s 2011 bilingual Broadway comedy Chinglish and was featured in the 2013 Contemporary Chinese Playwriting Series co-presented New York’s Signature Theatre and Lark Play Development Center. Her 2012 play Wild Boar had its English-language premiere in Chicago in 2017. Chong’s 2005 play French Kiss was filmed as Heaven in the Dark (2016) starring Jacky Cheung, and she adapted her highly acclaimed 2009 play Murder in San José for the screen as Fatal Visit (2018) starring Sammi Cheng. Her first opera libretto, for Huang Ruo’s Dr. Sun Yat-sen (2011), premiered in Hong Kong and later made its North American premiere in 2014 in a new production by Santa Fe Opera.

Chu Hei Chan graduated from the School of Drama, Hong Kong Academy for Performing Arts in 1991 with a major in Acting and was awarded the Advanced Diploma (Honours) in Performing Arts. After graduation, he furthered his theater studies at London’s Ecole Philippe Gaulier. In 1993, he co-founded Theatre Ensemble and has held various roles including director, playwright and actor. He founded Horizon Theatre Studio in 2004, Theatre Horizon in 2006, and the Hong Kong People's Fringe Association in 2012. Currently Artistic Director of Theatre Horizon and Chief Coordinator of Hong Kong People's Fringe Festival, he has performed in major theatrical productions for various professional theater troupes in Hong Kong. He has won Best Actor and Best Director (twice) at the Hong Kong Drama Awards, as well as a two-time Best Director for the Hong Kong Theatre Libre. Recent works as director include The Black and the Blue of a Man (North-East Village Edition), Century-Old Dreams of a Fishing Harbour Trilogy, The Garden Party (North-East Village Version), The Blue Bird, The Lu-Tings, Skylight and The Massage King.

Neal Goren is the founding Artistic Director and Conductor of New York’s Catapult Opera, which opens its inaugural season in 2020–21. Previously, he was the founder of Gotham Chamber Opera, where he conducted all of the company’s 18 productions, including critically acclaimed runs of Haydn’s Il Mondo della Luna, Mozart's Il sogno di Scipione, Milhaud's Les Malheurs d’Orphée, and Purcell's Dido and Aeneas (with period instruments). Guest conducting appearances include Respighi’s La bella dormente nel bosco for the Lincoln Center Festival and Spoleto Festival USA, Mozart’s Magic Flute at New York City Opera, and Britten’s Turn of the Screw for France’s Opera de Nantes and Angers. As a recital accompanist, he has collaborated with many of opera’s leading vocalists, including Leontyne Price (as her exclusive musical collaborator), Kathleen Battle, Harolyn Blackwell, Thomas Hampson, Lorraine Hunt Lieberson and Hermann Prey. He has been a member of the faculty of the graduate opera department of New York’s Mannes College of Music since 1992, the Accademia Rossiana in Pesaro, Italy and the Harlem School of the Arts.

Founded in 2008, the Hong Kong New Music Ensemble (HKNME) has been dubbed by CNN as “one of Hong Kong’s most progressive groups of musicians.” Widely praised for its innovative programming, the Ensemble’s productions include concerts, educational outreach events, and interdisciplinary collaborations and research projects with artists from different artistic fields. With a core of 15 members who perform in a variety of combinations and setting, the HKNME has performed both contemporary masterworks repertoire and numerous premières by composers from Hong Kong and overseas, including many commissioned by the HKNME itself. In addition to collaborating with such organizations such as Zuni Icosahedron, the Hong Kong Chinese Orchestra, and Guangdong Modern Dance Company, the HKNME has also organized events in partnership with the Hong Kong Arts Centre, West Kowloon Cultural District Authority, and the Goethe Institute Hongkong. A regular collaborator with music departments across all Hong Kong educational institutions, the HKNME was in residence at the Hong Kong Academy for Performing Arts from 2013 to 2015.

Asia Society Hong Kong Center is a locally funded, independent non-government organization established in 1990 by a group of Hong Kong community leaders. It is affiliated with Asia Society in New York, founded in 1956 by John D. Rockefeller III to promote mutual understanding and strengthen partnerships between Asia and the US in a global context. Asia Society Hong Kong Center is dedicated to providing educational platforms that present balanced perspectives and promote critical understanding of topics relevant to Hong Kong, Asia and the region's role in the world. Across the fields of arts and culture, education, business and policy, it seeks to provide insights, generate ideas and promote collaboration to address present challenges and create a shared future. Its home in Admiralty at the former Explosives Magazine of the old Victoria Barracks, made possible under Private Treaty Grant from the government, was the result of careful conservation, restoration and adaptive re-use which transformed the heritage site into a cultural, artistic and intellectual hub in 2012 to offer a broad variety of cultural and education programs to the community. The original commission of Mila was a continuation of the Asia Society Hong Kong Center’s “Rising Stars of Asia” series, launched in 2012 with support from Mr. and Mrs. Robert Miller to promote artistic development and collaboration between talents in Hong Kong and the region. Additional support for the New York and San Francisco performances has been provided by the Hong Kong Economic and Trade Office. The production is also dedicated to the late Mr. Washington SyCip, former Honorary Trustee of Asia Society and Founding Chair of Asia Society Philippines, whose support helped make this initial commission possible.

Established in 1995, the Hong Kong Arts Development Council (HKADC) is a statutory body set up by the Government to support the broad development of the arts in Hong Kong. Its major roles include grant allocation, policy and planning, advocacy, promotion and development, and special projects. The mission of HKADC is to support and promote the development of ten major art forms in literary arts, performing arts, visual arts as well as film and media arts in Hong Kong. Aiming to foster a thriving arts environment and enhancing the quality of life of the public, HKADC is also committed to facilitating community-wide participation in the arts and arts education, encouraging arts criticism, raising the standard of arts administration, and contributing on policy research.