'Hanging Fire,' and What It Means to Make Art in Pakistan | Asia Society Skip to main content

'Hanging Fire,' and What It Means to Make Art in Pakistan 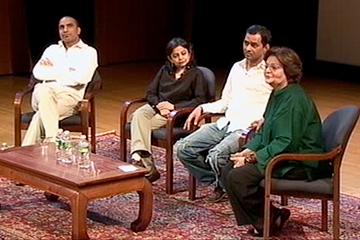 NEW YORK, September 10, 2009 - In conjunction with the opening of Asia Society Museum’s Hanging Fire: Contemporary Art from Pakistan, the first U.S. museum survey of contemporary Pakistani art, three artists featured in the exhibition joined its curator, Salima Hashmi, to discuss art’s role at a complex moment in the country’s history.

One of the most influential art writers and curators in Pakistan, Hashmi conceded that “[Pakistan] is not an easy society,” citing “a great deal of violence” and “lack of democratic norms.” But she said she was determined that the exhibition should represent the energy, complexity, and richness of Pakistan’s arts scene, rather than conform to expectations that it should depict political turmoil. Hashmi hoped Hanging Fire would “whet the appetite of the audience here in New York,” adding, “It has to be the first of many shows.”

When asked, “What is the significance of being an artist?” Imran Qureshi answered, “I feel really comfortable. . . . I am talking to society.”Rashid Rana and Asma Mundrawala both agreed that artists respond creatively to their particular time and circumstance.

Qureshi, one of today’s most respected miniature painters, saw a sense of humor as crucial for negotiating contemporary life in Pakistan. When the government began mandating overtly militaristic imagery in public spaces in the 1990s, for instance, Qureshi responded by inserting drolly incongruous missiles into his paintings.

Mundrawala has been involved with a socially conscious theater company for many years, and saw her work as informed by the narrative elements of theater as well as Pakistani street-level art. Hanging Fire includes four of her pop-up paper constructions depicting imaginary urban scenes in miniature. Their imagery is based on old family photographs, films, and the urban architecture of Karachi, which Mundrawala called a “beloved and beleaguered city.”

Rana argued that Pakistani artists’ political and social engagement doesn’t preclude a concern with formal issues, and vice versa. He also remarked that globalization means he and his peers are open to a wide range of influences, including Western ones: “We do watch Friends on TV.” Similarly, he said, the digital technologies he uses in his multimedia work offer “a lot of new possibilities.”

When an audience member suggested that Pakistan’s artists are not addressing its most fraught social and political issues, Rana concluded the discussion by responding, in Urdu, that reportage was a job for journalists, not artists.