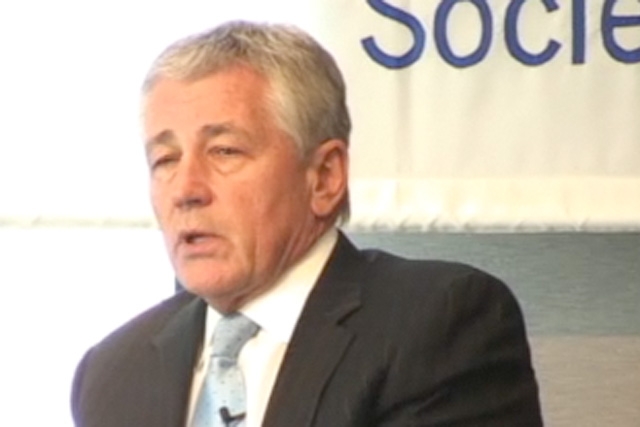 NEW YORK, Oct. 24, 2008 — Senator Chuck Hagel (R-NE) said that the next U.S. president will confront the largest inventory of challenges since Franklin Roosevelt in 1933, at a time when the world is more complex and the threats more immediate.

In a conversation with Joe Klein of Time magazine at Asia Society Headquarters in New York, Hagel said the new president will face a transformational moment in history, and emphasized the importance of forging a bipartisan consensus on key issues.

Asia is clearly one of the new centers of gravity in the world, Hagel said, and the American-Chinese relationship is as critical as any that has existed in history, a relationship which is competitive but also cooperative.

In response to Klein’s question about Hagel’s impressions of Obama during his trip to Iraq and Afghanistan, Hagel spoke about the three candidates whom he knows well: Senators John McCain, Barack Obama, and Joe Biden, highlighting in particular Obama's unusually good judgment and sense of curiosity, which he called important leadership qualities.

While he has not endorsed either presidential candidate, and diplomatically declined to do so on the Asia Society stage, Hagel expressed his support of Obama's position on Iran, saying the U.S. must engage or, he warned, "we'll blow up the world." He called for a new U.S. strategic framework in Central and South Asia, insisting that no policy in Afghanistan or on the larger question of extremism would be successful unless it dealt together with Iran, Afghanistan, Pakistan, and India.

Klein also asked Hagel about his opposition to the Kyoto Protocol, and Hagel discussed the Byrd/Hagel resolution, which made clear that the U.S. would not support any climate change treaty that might compromise its economic power. Hagel also talked about India and China as major polluters and said that any environmental agreement that does not place constraints on large developing economies would simply not make sense.