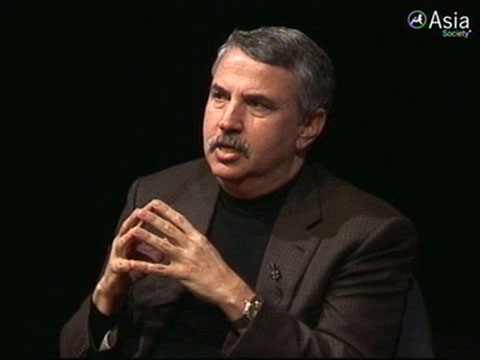 NEW YORK, January 11, 2011 - China is succeeding because it is doing what America used to do, argues Thomas Friedman.

"I don't know that much about China," the New York Times columnist told a sold-out audience at Asia Society.

"What I'm really thinking about is my country and what we envy in China today, maybe unrealistically.

Friedman, who is currently on book leave from his post as bi-weekly columnist, was joined in conversation by Orville Schell, Arthur Ross Director of the Center on US-China Relations at Asia Society.

Friedman cited the lack of good leadership in America as one of the main factors holding it back. He reserved especially harsh words for former President George W. Bush.

"You need leaders at catalytic moments," Friedman said. "We had ours. It was 9/11. And, our president blew it. He told us to go shopping."

Friedman also accused current Representative Michele Bachmann (R-MN) of deliberately spreading the false rumor that President Obama's recent trip to India cost $1 billion per day. "She peddled a lie that she made no effort whatsoever to check, and yet she's on Fox every week because she's out there. She's extreme. She's one of the noisemakers, and so she gets rewarded," Friedman said. "If we vote for her — if we give her money — then we deserve what we get. And we are gonna get it."

Friedman also criticized the Obama administration for failing to focus on education, which he argued was the real national security issue facing the US. "[Secretary of Education] Arnie Duncan — these guys are wonderful, smart, incredibly dynamic — if he were sitting in the first row here, I bet there aren't three people in this audience who could identify him. That's a huge failure of this administration, and a huge under-leveraging of their own talent."

In spite of the bleak tone of the conversation, Friedman insisted that he still believed in America.

"I am the biggest, raving American patriot there is. I am not a declinist," he said.

"My co-author [Michael Mandelbaum] and I — we are not pessimistic at all — we are frustrated. There's a big difference.

"We are frustrated because we believe in this country and its potential, and we are fighting so below our weight right now. I don't believe in the Beijing consensus for America or for anyone else. If it works for China and it gets China to a different place, God bless it.

"But we are so disconnected from the values and practices that got us where we are right now. We just had a terrible decade and it's going to take a while to dig out of this."