When Japan Opened to the World: Cross-Cultural Influence in Arts, Crafts and Literature in Europe and Japan in the 19th Century | Asia Society Skip to main content

When Japan Opened to the World: Cross-Cultural Influence in Arts, Crafts and Literature in Europe and Japan in the 19th Century 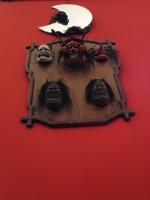 The talk will deal with the historical background of Japan to participate in the international expositions and how the results of the expositions changed the Japanese arts and crafts of the late nineteenth to early twentieth centuries. I will also discuss how Japanese designs were incorporated into French art.)

Japonisme was born thanks to a variegated group of persons who, for very different reasons, promoted the arts of Japan. While there is no shortage of research on their patiently-gathered collections, aesthetic choices, roles on the art market, the historic background of their interest in ‘the dark side of Japan’ has often been overlooked on both sides of the Atlantic. This presentation focuses on two lesser-known figures of Japonisme: Clémence d’Ennery (1823-1898) in her ‘demon-haunted’ Parisian hôtel particulier and Percival Lowell (1855-1916), the man who discovered the ‘Valley of Wizards’ in the Dewa Mountains of Northern Japan.

François Lachaud is Professor of Japanese Studies at the École française d'Extrême-Orient where he holds the chair on Buddhism and Japanese civilisation. He is also EFEO Professor of Japanese Studies at the Religious Studies department of the École pratique des hautes études. From January 2001 to December 2007, he served as head of the EFEO Kyoto Centre. From January 2008 to December 2010, François Lachaud was the EFEO director of studies based in Paris. From July 2011 to July 2013, Lachaud was Smithsonian Senior History of Art Fellow at the Arthur M. Sackler Gallery and Freer Gallery of Art in Washington D.C. From September to December 2014, François Lachaud was visiting professor at the Institute for Research in the Humanities in Kyoto (fall 2014) where he has been an associate member since 2004. François Lachaud completed his PhD in East Asian Studies (Japanese Studies) in Paris.  A recipient of the Stanislas Julien Prize (2006), he holds an agrégation in Japanese language and civilisation since 1994. François Lachaud first graduated (MLitt) in English studies (medieval and early modern literature) at the universities of Oxford and Paris where he also studied historical linguistics (Scandinavian, Germanic, and Celtic languages).