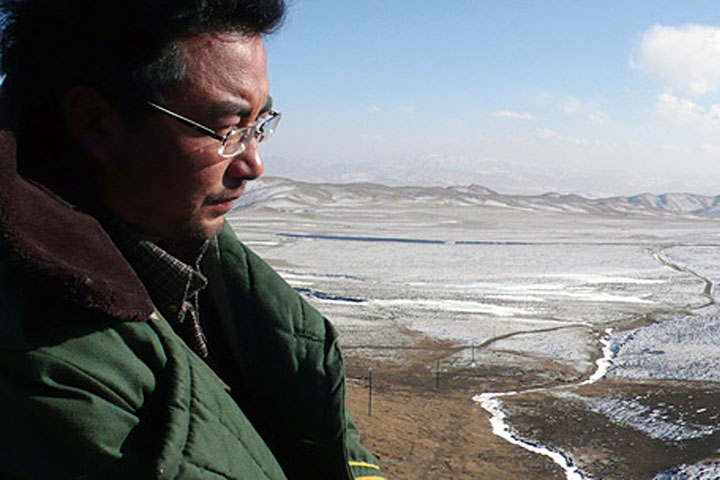 Filmmaker Pema Tseden (Wanma Caidan in Chinese) has emerged as the most outstanding cinematic voice of Tibet. Hailing from the Tibetan area of Amdo (Qinghai) and trained at the prestigious Beijing Film Academy, where he was its first-ever Tibetan student, Pema Tseden has made award-winning films that meditate on the meaning of culture and tradition in contemporary life, with Tibet as his canvas. The Tibet in his films is not the one that has been exoticized in Western cinema, or promoted as an epic example of progress and modernization in Chinese film. Instead, he has created a raw, observant, and tender film language to show the detailed tapestry of contemporary Tibetan experiences. Pema Tseden speaks of his art in relation to the traditional Tibetan aesthetic of the thangka or scroll paintings: "They're like a panorama: all the stories are in one picture."

Free admission. Limit two tickets per person. Click on the links below to register for the films.

Read and hear about Pema Tseden on NPR's All Things Considered

A Tibetan film director travels from village to village looking for actors to star in a film based on the Tibetan opera Prince Drimé Kundun, a quintessentially Buddhist legend about compassion and self-sacrifice. Traveling by car, the director holds auditions in the unlikely but all-pervasive contexts of contemporary Tibetan life—in building sites, streets, bars, night clubs, and monasteries. Exercising formalistic restraint with a contemplative pace and unique camera placement, Pema Tseden has made a road movie that takes the viewer straight into the heart of a changing Tibet, raising penetrating questions about what identity means in the modern world. This film is the first ever film made in Tibet to be shot entirely with a Tibetan crew in the Tibetan language, with production support from renowned Chinese 5th Generation filmmaker Tian Zhuangzhuang.
Q&A with filmmaker.

"A charming ... film within a film ... with easy grace [and] a meditative aesthetic."—Giovanna Fulvi, Toronto International Film Festival

"An offbeat cultural album of Tibetan people as well as a cinematic pilgrimage to understand their lifestyles and religious heritage."—Maggie Lee, The Hollywood Reporter

"The Search is literally a journey through new Tibet."—Louisa Lim, All Things Considered, NPR

"Most exciting and unexpected ... discovery of an important new film."—Chris Berry, Senses of Cinema

A child monk prepares to travel home from his monastery to spend the Tibetan New Year with his family. The villagers are rehearsing their annual staging of a traditional Tibetan opera but the little monk is more interested in the comic-religious television series Journey to the West. When he returns to the monastery, he hopes to watch the drama on television along with the monastery's trulku (reincarnated lama), also a child, during their free time, but after one day is left with just a plastic monkey mask. The intricate and comedic balancing of study in the monastery with traditional opera in the village and Chinese drama on television brings to life the Tibetans' seamless interweaving of tradition and globalization. Speaking as the chair of the Jury at the Pusan International Film Festival, renowned Iranian filmmaker Abbas Kiarostami praised Pema Tseden's directorial debut and described it as in the tradition of Bresson and Ozu.
Introduction by Professor Robbie Barnett, Columbia University.

"A beautifully observed, very well-made and touching first feature ... that deals with the subject of cultural change with remarkable subtlety"—Jury,  the International Film Critics Federation Prize, 2006

"The Silent Holy Stones has the immediacy of a documentary, delivering real insight into the evolution of a much-romanticized culture."—Aaron Lazenby, San Francisco Film Festival 2006

Support for this program is provided, in part, by The Henry Luce Foundation, The Shelley & Donald Rubin Foundation, and the Center on U.S.-China Relations.