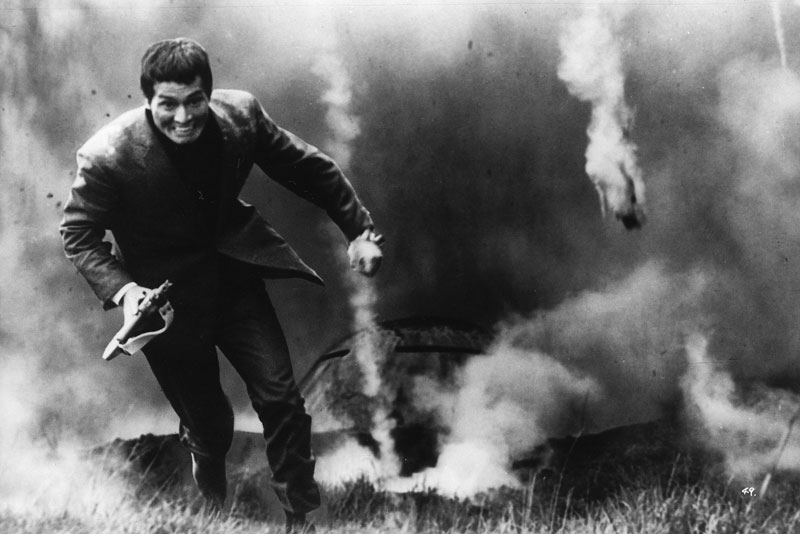 Co-presented with the Japan Foundation

The decade of the '60s produced a wide array and high quantity of films that made it the golden age of Japanese cinema. Politically radical New Wave films, formally vigorous art films, and mainstream genre films were produced side-by-side contributing to the vibrancy of the industry. This series showcases a sampling of films representative of this period. These diverging voices reflect acute attitudes toward a changing Japan, a sense of exploration, with hints of tradition. (All films in Japanese with English subtitles.)

Free admission to all films.

In a career spanning four decades, Oshima (Cruel Story of Youth, In the Realm of the Senses) has made some of the most memorable as well as formally and politically provocative films highlighting outcasts, criminals and rebellious youth in Japanese film history. In Pleasures, a lovesick young man entrusted with a case of money belonging to an imprisoned bureaucrat embarks on a year of sexual fantasies and indulgence. (Janus Films)

Based on a popular television series of the same name also directed by Gosha, Three Outlaw Samurai features three ronin who found themselves accidentally entangled in the conflict between a group of peasants and their local magistrate. While initially reluctant to get involved, the three quickly make up their mind as to for which side they will fight. A dash of humor, attitude and style accompanies this action-packed picture. (Janus Films)

"The result is cinematic magic, the perfect blend of blood and tears, a film worth watching over and over again."—Mike Street, The Asian Reporter

"[Gosha is] a genius at staging action."—Stephen Hunter, The Washington Post

Reiko (Hideko Takamine), a war-widow, keeps her late husband’s family store afloat against supermarket competition and the meddling of her in-laws. Fed up with the pressure, she embarks on a journey home, accompanied by a younger brother-in-law (Yuzo Kayama). The journey, with hints of forbidden romance, ends with a shocking finale. Known as "a great director of women" (Film Comment), Naruse contemplates a society challenged by capitalism and changing social mores in this stunningly shot feature. (Toho Co., Ltd.)

"[In the films of Naruse,] a flow of shots that looks calm and ordinary at first glance reveals itself to be like a deep river with a quiet surface disguising a fast-raging current.""—Akira Kurosawa

A creepy "mad scientist" who directs an insane asylum trains mental patients to become assassins. One of the targets, a vision-impaired nerd-turned-suave secret agent played by Tatsuya Nakadai, called "Japan’s most distinguished living actor," (Terrence Rafferty, The New York Times) is able to dodge all attempts on his life. This wacky, farcical chase comedy takes you on a wild ride through a surrealist landscape and a narrative filled with twists and turns. (Film also known as Epoch of Murder Madness.) (Toho Co., Ltd.)

"[a] sharp-edged lampoon that ... compares favorably with such other brilliant, tongue-in-cheek, mod sixties masterpieces as Elio Petri’s The Tenth Victim and Seijun Suzuki’s Branded to Kill."—Chris Desjardins, Outlaw Masters of Japanese Film

Peasants in a village hire a bounty hunter to rebel against a shogun who exploits them for money in order to remodel an Edo castle. The bounty hunter summons his fellow fighters to join the fight. What ensues is an epic battle involving samurai, ninjas, powerful guns and cannons. Growing up in a family that ran a horse breeding business, director Kudo has proved particularly adept at choreographing action sequences, making this Japanese version of a B-Western especially enthralling. (Toei Co., Ltd.)

"[Kudo is] an extraordinary stylist…To call him a skilled action director is to understate the power of his set-pieces."—Henry Sheehan

This project was supported in part by a grant from the Institute of Museum and Library Services.