Symbols of the Universe 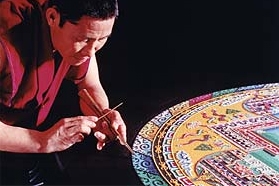 Mandalas are Buddhist devotional images often deemed a diagram or symbol of an ideal universe. Mandalas come in many forms. Often they are painted on scrolls and taken with travelers over long distances across the Eurasian continent. Learn more about Buddhism through understanding one of its more iconic artworks.

A mandala is a symbol of the universe in its ideal form, and its creation signifies the transformation of a universe of suffering into one of joy. It can also be used as an aid to meditation, helping the meditator to envision how to achieve the perfect self.

Mandalas were created in the service of one of the world's great religions, Buddhism. They were produced in Tibet, India, Nepal, China, Japan, Bhutan, and Indonesia and date from the 4th century to present. Now they are created throughout the world, including New York City.

A special sand mandala painting is a gift to New York City from the Tibetan Buddhist monks of Drepung Loseling Monastery as a tolken of healing and goodwill following the terrorist act against the city on September 11, 2001. The construction of the mandala begins with a ceremony in which the monks consecrate the site and call forth forces of goodness through chants, meditation, and music. Then, over the course of ten days, the monks will pour millions of grains of colored sand from traditional metal funnels (chak-purs), purifying and healing the space and its inhabitants in the process. Shortly after its completion the monks will dismantle the mandala to symbolize the impermanence of all that exists and disperse the sand in order to share its blessing.

History and Geography
Siddhartha Gautama, the Buddha, was born in what is today Nepal in 563 B.C.E. While we know that his followers spread the message of Enlightenment after his death, the presence of Buddhist art is often the earliest proof of the existence of Buddhism in a given place.

The first traces of Buddhist art were produced in India during the first century B.C.E.

Buddhist missionaries transported doctrines from India along the Silk Road (through the Karakorum and Hindu Kush regions, Kashmir, parts of present day Pakistan, and northern Afghanistan) as early as the third century B.C.E.. Artifacts followed sometime after. Literary and archeological evidence indicate that Buddhism arrived in China by the first century C.E. From China, Buddhism reached Korea in the fourth century C.E. and from Korea it spread to Japan in the middle of the sixth century C.E.

By the first century C.E. Buddhism had reached various regions of southeast Asia and became particularly important in Indonesia during the seventh and eighth centuries C.E.

The Painters
The majority of painters, past and present, were pious laymen, usually from families whose hereditary occupation was painting. Some painters were monks. All painters were religiously minded, and in Tibetan Buddhism such painters were required to undergo certain initiation rites first. Paintings were commissioned by a patron.

Artists worked seated on the floor with the painting propped in their laps or in front of their crossed legs.

The Paintings
Paintings were created in a systematic way, proceeding through five steps: