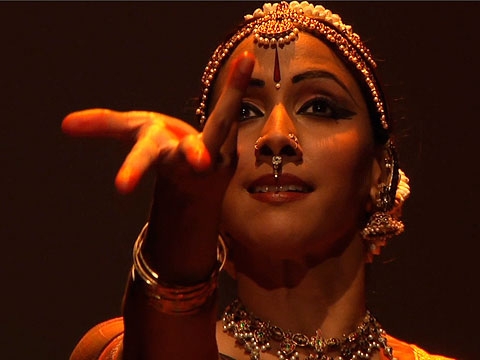 At the heart of Indian dance lies abhinaya, in which a dancer conveys poetic, philosophic, imagistic meanings suggested by the accompanying lyrics. Four senior performers of Kathak, Kuchipudi, and Bharatanatyam present their approaches to this art. The evening culminates with improvisations of abhinaya—across disciplines but within a shared aesthetic tradition.

One of the most exciting elements of Indian dance is how it incorporates chanted poems and vocalized rhythmic syllables. Dancers demonstrate how, and discuss why, they use spoken sound and word in current work.

How do mathematics and rhythm intersect? A fascinating discussion and demonstration of the Indian systems of rhythms, Carnatic and Hindustani, and the mathematical process of composition. Watch the complete video

Dance traditions connect us to the past and move us into the future. As traditions transform, how have changes in patronage, transmission and globalization affected dance and choreography? A thought‐provoking discussion with leading dancers, choreographers, and scholars who will share their insights into the changing world of Indian dance.

Rasaboxes brings the practice of abhinaya into American performer training techniques. Rasaboxes was developed by Richard Schechner over his long engagement with avant-garde theatre, Kathakali, and the Naatyashaastra, a Sanskrit text dealing with theatre, dance, and music. Rasaboxes trains participants to physically access and express eight key emotions. It integrates ancient theory with contemporary emotion research, neuroscience, and performance theory. Rasaboxes integrates rather than separates acting, movement, and voice. It engages the whole performer in a single, powerful, and learnable approach.