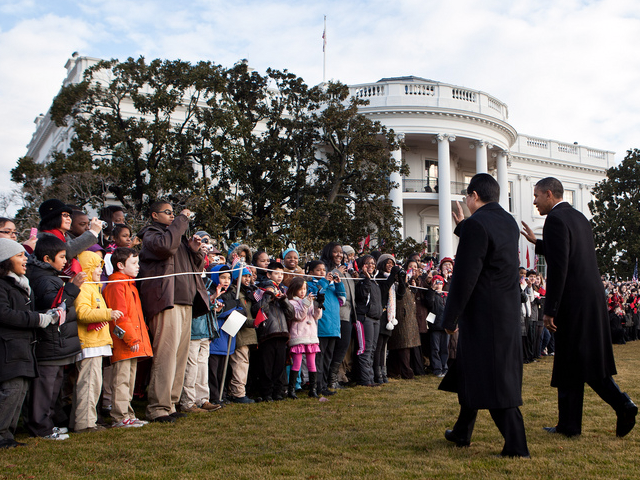 Last week, First Lady Michelle Obama underscored the Obama administration's commitment to the 100,000 Strong Initiative, a national effort designed to dramatically increase the number and diversify the composition of American students studying in China. The event, which took place on the campus of Howard University, coincided with the visit of Chinese President Hu Jintao to Washington, D.C. In her speech, Mrs. Obama said that by studying abroad, students are helping to make America stronger. She quoted her husband, saying, "America has no better ambassadors to offer than our young people."

The event was striking in the diversity of the student "ambassadors" that lined the stage behind Mrs. Obama, and the hundreds of other secondary school and college students seated throughout the auditorium who are studying Chinese and have traveled to China on various exchange programs. Typical of these students was an African American high school senior, whom I overheard say -- in a conversation that effortlessly switched between Mandarin and English -- that his A.P. Chinese class was a "snap" given how far his language skills had progressed after a summer exchange experience in Beijing.

Secretary of State Hillary Clinton officially launched the 100,000 Strong Initiative in May 2010 with the goal of preparing the next generation of Americans who will be charged with managing the growing political, economic and cultural ties between the United States and China. If the crowd at Howard University was any indication, among those creating critical linkages with China will be a significant number of minority students who are among the more than 120,000 students now studying Chinese in U.S. schools and universities. That is as it should be.

African American, Latino, and Native American students are disproportionately affected by the alarming achievement gap prevalent throughout the U.S. -- that is, the inability of schools and school systems to consistently produce high academic achievement and post-secondary success for these students. But there is another gap of equal concern for all students, including those from low-income and minority backgrounds. It's the opportunity gap, which Mrs. Obama succinctly described when she said, "Getting ahead in today's workplaces isn't just about the skills you bring from the classroom. It's also about the experience you have with the world beyond our borders -- with people, and languages and cultures that are very different from our own."

Studying the world's languages and traveling abroad are two key ways for students to develop the global competence required to bridge the opportunity gap. It is to the Obama administration's credit that the 100,000 Strong Initiative seeks to develop specific opportunities and funding sources for underrepresented students to study in China.

Asia Society's Confucius Classrooms, a national network of exemplary Chinese language programs in elementary and secondary schools, were invited to the Howard University event because of their strong commitment to building an educational partnership with schools in China and supporting their students in learning Chinese. Asia Society's firm belief in the importance of developing language skills and global competence has led to a range of programs that provide opportunities for all American students to become more knowledgeable about people, languages, and cultures beyond our borders. The Confucius Classrooms Network serves a diverse group of students in 60 schools across the country. Roger Harris, the superintendent and chief executive officer for Network member Boston Renaissance Charter Public School, was quoted this week as saying, "In most foreign language programs, it's for the students who are in the talented and gifted program, students who have shown through the years a proficiency. But what we've learned in two years is ... it doesn't matter what the demographic is. By exposing kids to language and culture in the early years, all the stereotypes go out the window."

And Asia Society's International Studies Schools Network (ISSN) is successfully producing globally competent, college-ready high school graduates in 26 schools nationwide, including the Walter Payton College Prep High School in Chicago which President Hu visited last week. Across the ISSN, the population of students is over 80 percent minority and 63 percent low-income, and each one of these schools offers Chinese and other world languages.

Mrs. Obama's keynote was followed by a panel discussion with students who shared anecdotes of their experiences learning Mandarin and studying in China. One young woman of color said that her experience traveling to China "made me realize I am not only a citizen of the United States, I am a citizen of the world." She's at the cutting edge of a generation of Americans realizing that regardless of color or class, everyone has the right to be actor, not a bystander, on the world's stage.

Anthony Jackson is Vice President of Education of Asia Society.