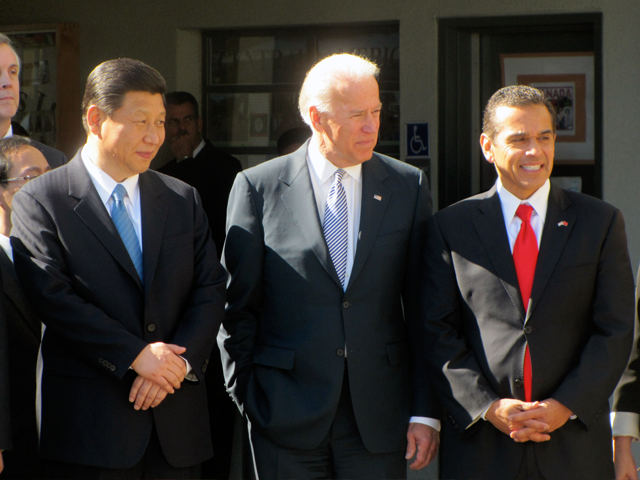 Today U.S. Vice President Joe Biden and Chinese Vice President Xi Jinping visited the International Studies Learning Center (ISLC) in Los Angeles, an Asia Society-designed school. The vice presidents of the two powerful nations looked on as students spoke in Chinese and Spanish, used digital tools, and worked on projects relating to world issues. The school mission is to prepare students to be globally competent and ready for college and the interconnected world beyond.

Xi, expected to be named China’s new head of state next year, spent much of the week discussing international security, global economic, and U.S.-China bi-lateral issues as he toured the United States with Biden.

The school visit symbolizes another strategic issue for the two nations: preparing a rising generation to collaborate and compete effectively. The United States and China arguably have the world’s most complex and high-stakes relationship now and for the foreseeable future. And yet, both nations recognize a so-called knowledge imbalance: Some 10 times more Chinese come to the United States to study than Americans who study in China. Chinese students who study English outnumber Americans studying Chinese by 600 fold.

ISLC is not only a model for preparing students for the global knowledge economy. At a time when dropout rates in urban America range between 33 and 50 percent, graduation rates at this inner-city Los Angeles Unified School District school is 92 percent. ISLC is helping students beat the odds by providing a relevant, forward-looking education. Students at this, and most Asia Society-designed schools, study Chinese, Japanese, Korean, French, or Spanish, plus a rigorous curriculum focused on foreign policy and global issues. Eighty-four percent of students earn college credits before they graduate high school.

Senior officials from both nations have long recognized contributions made by Asia Society to the U.S.-China relationship. Xi’s visit follows Chinese president Hu Jintao’s visit to the Walter Payton College Preparatory Academy in Chicago. During the same state visit, U.S. President Barack Obama presented a gift to the Chinese president: letters written in Chinese by Asia Society students. First Lady Michelle Obama spoke to Asia Society students as part of a 100,000 Strong event, celebrating U.S.-China educational linkages. Chinese State Councilor Liu Yandong addressed a crowd of 1,200 educators assembled by Asia Society at our National Chinese Language Conference. These happened in the last year, but Asia Society has a long history of convening leaders from the two nations on a number of pressing issues, very important among them are discourse and models of best practices in education.

Asia Society’s International Studies Schools Network (ISSN) is often recognized by education systems around the world as a model of excellence and equity in American education. It is an example of private-sector partnerships with public schools.

The ISSN responds to two intertwined imperatives facing American education. The first is to overcome the chronic problem of poor academic performance among low-income and minority students. The second is to prepare students for work and civic roles in a global knowledge economy, where success increasingly requires the ability to compete, connect, and cooperate on an international scale.

Since 2003, Asia Society has worked in partnership with school districts and charter authorities to reform schools. The network currently includes 34 schools in seven states. Throughout the network, 85% of students are minorities, and 74 percent are from low-income families. In a limited study, research shows that 92 percent of Asia Society students are graduating high school (compared to a 50 percent average in similar socio-economic settings); of that, 94 percent continue on to four-year colleges and universities.

The International Studies Learning Center in Los Angeles was created by Asia Society nearly a decade ago.