New Ways of Seeing: Seeing with "Other Eyes" 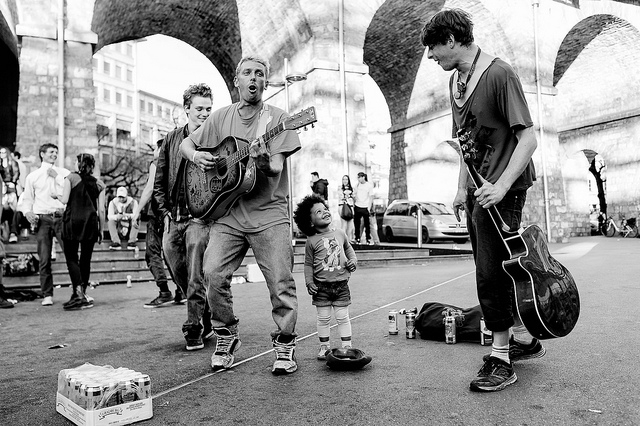 It’s become clear that multilingualism is quite possibly the most effective lever for helping us to see the world from multiple perspectives, think in different ways, and tackle real-world problems with a variety of approaches. These skills comprise the most critical set for students graduating into a world beyond school in which the rules are constantly changing—a world in which it is increasingly the case that, rather than going out and finding jobs, many young people must re-envision the very concept of having a “job” and create a job description for themselves which may or may not have existed a few years ago. And for language learners of any age, the ability to see the world from multiple perspectives is one of the marvelous gifts that learning another language can impart.

Those of us who regularly speak and read multiple languages know that the personas we adopt in each of them may well be radically different, and that the modalities of learning and communication we employ within the different linguistic worlds we inhabit give us a unique ability to think flexibly, adapt to new situations, and see things in ways our monolingual peers are seldom able to do. The curious thing to note, of course, is that there is ultimately no such thing as strict “monolingualism.” What my ten-year-old son means by the word “awesome” is completely different from what my grandmother would understand by that term. Even beyond the obvious differences between the varieties of English (American, Canadian, Australian, Irish, Indian, etc.) that we speak, even within a single linguistic community, there may be significant differences in the terms and expressions we use or the ways in which we articulate or make meaning. These differences correspond to cultural and educational background, social and economic status, and various other forms of personal and collective identity.

In the world we live in now, these identities and self-definitions are perpetually in a state of transformation. Indeed, perhaps the one and only constant in the world today is change. At the time of this writing, the so-called smart phones that we take to be such an inevitable part of our social and material landscape have scarcely been with us for a decade. The iPhone was released in 2007 and the iPad not until 2010—yet it’s almost unimaginable now to contemplate a world without these devices. As a child in the 1980s, I grew up in a world that had just phased out eight-track tapes; we listened to albums on vinyl records and audio cassettes, and still used a mix of rotary-dial and touch-tone phones. When I told a student in Beijing in 2011 that my first computer had 5 K of memory, he replied: “That’s impossible!” It was not only not impossible, but it was the state-of-the-art in personal computing at the time. I wrote programs in BASIC and designed maze games that we saved to digital tape; we dialed in to early BBS (bulletin board systems) through the phone lines and listened to the electronic beeps as the modem dialed in. Young children today can no more fathom that world than we can contemplate life in Sherlock Holmes’s London, with its steam trains and horse-drawn carriages.

While we can extrapolate and predict much of what the future will bring, there is an extent to which we have no idea what kinds of skills our current elementary and secondary school students will face once they enter the world as professionals. Indeed, there has been a tectonic shift in the world, away from having secure, long-term jobs to creating opportunities for oneself through innovation and entrepreneurship. Young people today are less likely to be looking for a job than creating a job description for themselves. With this in mind, what we need to be teaching our students is not only a specific body of skills or knowledge, but for them to have the flexibility of mind to adapt to whatever knowledge and skills are required of them at a given time.

While this may seem like a recent phenomenon, rapid change has always been a driver for innovative thinking. Take the case of the great French novelist Marcel Proust (1871–1922), who lived when Paris was careening from the nineteenth into the twentieth century. At the time, some of the world’s biggest celebrities were explorers who navigated the globe searching for lost civilizations and new natural wonders. But Proust, who spent much of his life in bed in his cork-lined room, knew better. He spoke about a possible future trip to Mars or Venus, concluding that while “a pair of wings, a different mode of breathing, would enable us to traverse infinite space,” it would “in no way help us, for, if we visited Mars or Venus keeping the same senses, they would clothe in the same aspect as the things of the earth everything that we should be capable of seeing.” Proust knew that the “only true voyage . . . would be not to visit strange lands but to possess other eyes.”1

Proust here is acknowledging the power of perspective and the important role that art plays in helping us see the world in different ways and from a multiplicity of angles. He goes on to suggest that true discovery lies in the act of beholding “the universe through the eyes of another, of a hundred others, to behold the hundred universes that each of them beholds, that each of them is . . .”

While Proust was likely arguing for the power of art, literature, and music to transform our sense of reality and give meaning to the world, there is truly no better way to achieve this kind of understanding than through the acquisition of multiple languages. Just as science, art, or mathematics are different lenses through which to view and comprehend the complexity of the world, so too can the application of different linguistic lenses enhance and deepen a student’s capacity for processing information and analyzing the shape of the world.

The literary scholar George Steiner is to my mind one of the most eloquent commentators on this topic: “Each human language maps the world differently. There is life-giving compensation in the extreme grammatical complication of those languages (for example, among Australian Aboriginals or in the Kalahari) whose speakers dwell in material and social contexts of deprivation and barrenness. Each tongue—and there are no “small” or lesser languages — construes a set of possible worlds and geographies of remembrance.”3 It’s important to note that neither Steiner nor I are arguing that people who speak different languages think differently, as those who support the strong form of what has come to be known as the Sapir-Whorf hypothesis. We are arguing instead that those who speak (and think in) different languages also organize knowledge and understanding in different ways, and that these different modes of organization help us to think more flexibly and to see issues from different perspectives.

Ludwig Wittgenstein’s well-known dictum that “the limits of my language are the limits of my world” is also instructive in this regard. By promoting multilingualism and the multiple perspectives referenced by Proust and Zhuangzi, we are allowing ourselves to transcend those limits and see the richness of the world we live in. The flexibility of mind we will develop in the process applies well beyond the narrow space of language learning. What linguists call code-switching—the ability to alternate between different languages—is a way of training the brain to be flexible, adaptable, and to wear different “lenses.” In thinking about the transformative power of this cognitive ability, the metaphor of music is perhaps instructive.

People often think about the acquisition of a new language as a rote process of transferring large amounts of vocabulary and grammar into the learner’s cognitive and linguistic repertoire. Those of you who remember your high school French teacher certainly know that many teachers of languages approach the problem in this way. For me, however, the act of language learning is much like playing music. Every world language shares a core of common structures and patterns, and all languages can be described according to their particular syntax, grammar, morphology, phonology, etc.—all the categories used by linguists to analyze particular languages. In the same way, all music shares a common set of characteristics and principles like tone, rhythm, instrumentation, harmony, etc. that musicologists use to understand different styles of music.

Languages differ from each other much in the way that Western classical music, jazz, rock, metal, and Indian classical music differ. To learn any language well, a learner needs to understand the underlying structures and functions of all language (sounds, symbols, and language structures) while at the same time develop an ear for the particular music of that language. In learning Chinese, for example, a learner needs to be particularly attuned to the characteristics of a tonal system that is radically different from the stress used in languages like English, the pitch-accent systems like those found in Japanese, or the vowel harmony of languages like Korean, Mongolian, and Turkish.

Becoming proficient in a language involves learning to improvise in a particular “musical” idiom. And whether we use the musical metaphor or the visual metaphor (i.e., different lenses), it’s clear that the human ability to process language has a lot to do with our ability to recognize and interpret patterns.