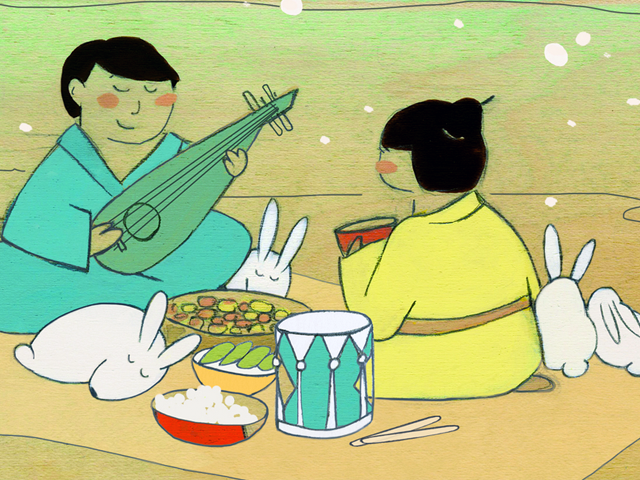 Cultural literacy is developed in many different ways. Learning music—and learning about cultures through music—is one of the most enjoyable ways to understand the world a little better. I recently had the pleasure of meeting Elena Moon Park, a musician and producer, who taught me a lot about cultural understanding through music. Here is an excerpt from our conversation, and a musical treat she shared with our readers.

What was the inspiration for Rabbit Days and Dumplings?

Elena: I've been performing all-ages/family music with Dan Zanes and Friends for nearly six years, and through that time, I've experienced first hand how much the sharing of one's music has a beautiful and profound impact on people of all ages. Music has a unique ability to cross borders of culture, language, background, age, and more, giving the listener (and performer) a terrific introduction to possibly unfamiliar worlds.

I was born and raised in East Tennessee, but both of my parents immigrated to the US from South Korea in their mid-twenties. As a first generation Korean American, I had a limited connection to my own cultural background growing up, due to the fact that we were in a rather small Southern town with an equally small Asian American population. Later, as I toured around the country and the world with Dan Zanes and Friends, I met a large number of Asian American families and adopted Asian children in our audiences, and I quickly realized that there was a lack of music from East Asia available in any musical scene in the US. I also realized that an exploration of this music would offer a beautiful opportunity for me to learn about my own background, and that of neighboring East Asian countries. In a sense I was inspired by the fulfilling experience of performing music for families, and I decided upon an album of music from East Asia to add a personal flavor to the project.

Why did you produce it?

Elena: In many ways this album is a very personal journey for me, allowing me to learn some great songs from around East Asia, and to share them with a broader community. It's also an album that I would have liked to have growing up as a Korean American, to fulfill (or perhaps grow) a curiosity about music from my own cultural background. I hope that it will serve to fulfill or grow this curiosity in other Asian American and non-Asian American young people across the country, as a means of entry into these beautiful cultural and musical traditions. As we are an incredibly diverse country, filled with so many languages, foods, and traditions, I believe it can only be a positive effort to embrace, explore, and revel in this diversity. I hope to add to that exploration.

You've shared a track with our readers. Tell us about it.

Elena: Poong Nyun Ga is a festive Korean song about the new harvest (see the lyrics and learn more). I love the tune because the subject matter is so universal—you can probably find a rousing harvest/farming song from any culture around the world. I also love this track because it features an incredibly talented group of young musicians, called the Korean Traditional Marching Band, who play traditional drums and sing. The group is led by Chunseung Lee and rehearses in Flushing, Queens, keeping alive a fascinating tradition of Korean drumming to young students.