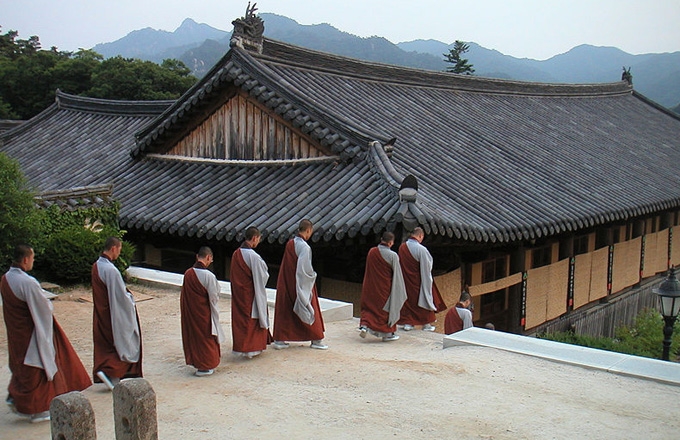 Excerpts from Jesus' Sermon on the Mount; Buddhism's Four Noble Truths; Confucius' Analects to be used to examine the confluence and co-existence of belief systems in Korea.

Sermon on the Mount

The Sermon on the Mount was the largest public address made by Jesus, according to Scripture. The first 8 statements of the Sermon, called the Beatitudes, are contained in Matthew 5:3–5:12 in the Gospels section of the New Testament. Christianity was most likely introduced to Korea by Jesuits who accompanied Japanese troops during the Hideyoshi invasion in 1592. Modern Korea has seen Christianity suppressed under Communist rule in the North with expansion in South Korea following the Korean War (1950–53).

Buddhism was introduced to Korea by a Chinese monk, Sundo, during the third century CE of the Koguryo Kingdom (37 BCE–668 CE). Buddhism had originated with the enlightenment of an Indian prince, Siddhartha Gautama (d.461 BCE). Siddharttha had broken away from his family and society to become an ascetic. One day, after having given up asceticism, he became enlightened through meditation under a bodhi tree. And so, he became known as “Buddha” or “enlightened one.” The Four Noble Truths were his first teaching, given to a handful of close disciples.

The Middle Way endorses “balanced” living, without extremes of action, emotion, or thought, with emphasis on cultivation of the mind through meditation, and cautions against bodily pleasures.

King Sinmun of the Silla Kingdom first institutionalized Confucian learning in Korea by establishing the Royal Confucian Academy in 682 CE. The Analects were part of the Academy’s curriculum of classical Chinese learning. In the Analects, Confucius (551-479 BCE)—or Kongzi (also, “the Master” or Master Kong)—urged propriety and virtue in the governing of self and society.

The following sayings of Kongzi are recorded in the Analects of Confucius:

13:27 The firm of spirit, the resolute in character, the simple in manner, and the slow of speech are not far from virtue.
8:16 With the impulsive yet evasive, the simple yet dishonest, the stupid yet untruthful, I hold no acquaintance.
4:17 When you see a man of worth, think how to rise to his level. When you see an unworthy man, then look within and examine yourself.
8:17 Learn as if you were not reaching your goal, and as though you were afraid of missing it.
14:3 The scholar whose regard is his comfort is unworthy to be deemed a scholar.
3:3 Zi Gong asked: “What is your opinion of me?” “You are a vessel,” said the Master. “What sort of a vessel?” he asked. “A jeweled temple-vessel,” was the reply.
4:8 He who heard the truth in the morning might die content in the evening.
6:18 He who knows the truth is not equal to him who loves it, and he who loves it is not equal to him who delights in it.
7:24 Is virtue indeed afar off? I crave for virtue and lo! virtue is at hand.
17:14 To proclaim on the road what you hear on the way is virtue thrown away.
13:30 To lead an untrained people to war may be called throwing them away.
2:24 To sacrifice to a spirit of an ancestor not one’s own is sycophancy; To see the right and not do it is cowardice.
4:21 The age of one’s parents should ever be kept in mind, as an occasion at once for joy and for fear.
15:15 If a man does not ask himself, “What am I to make of this?” “What am I to make of that?”—there is nothing whatever I can make of him.