What Can We Learn from High-Performing Nations? 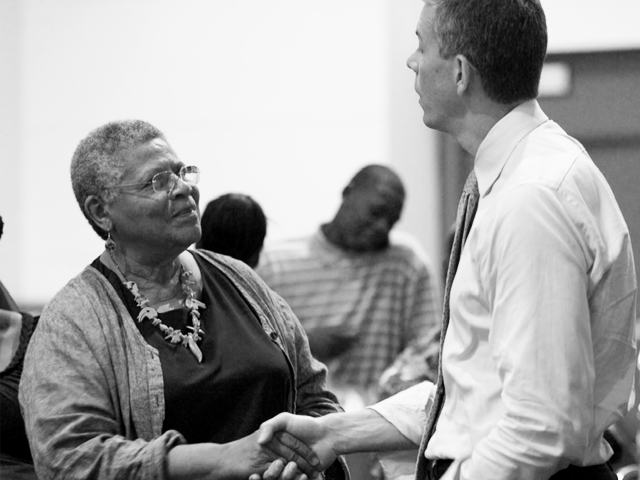 LITTLE ROCK, AR, August 25, 2010 — U.S. Secretary of Education Arne Duncan has a message for teachers: our nation's future prosperity depends on you.

At the opening of his back-to-school bus tour, Secretary Duncan cited the Asia Society Learning with the World initiative (download report), which shows how countries with high-performing education systems invest more wisely in teachers. Duncan spoke eloquently about America's own struggles toward achieving excellence and equity in education, and what kinds of promises the future must hold if America is to keep its competitive edge.

Secretary Duncan chose to start a back-to-school tour at the historic Central High School, where, in 1957, nine black students were notoriously denied entry into the school despite US Supreme Court orders to desegregate schools. More than 50 years later, Central High School is known for offering an excellent education for all students, and is one of the nation's top-ranked schools.

"Nothing is more important and nothing has a greater impact on the quality of education than the quality and skill of the person standing in the front of the class," said Duncan, who plans to travel the country honoring teachers.

But he also said "there is so much that needs to change in the way that America recruits, trains, supports and manages our teachers." Duncan said that a new shift in federal education policy will be to take the burden of failure off of schools, and instead place it on the system.

The facts are that equal access to an excellent education is still not a reality in the United States, and student achievement rates are declining as a result. In a vast international study, a report on international benchmarking finds that a nation’s economy is directly linked to the performance of its school system.

Learning with the World

It was within this context that Secretary Duncan cited a recent Asia Society report: "The Asia Society recently held an international symposium on teacher quality and they found that high-performing countries put much more energy into recruiting, preparing, and supporting good teachers, rather than on the back end of reducing attrition or firing weak teachers."

He added, "Our competitors in other parts of the world recognize that the roles of teachers are changing. Today, they are expected to prepare knowledge workers, not factory workers, and to help every child succeed, not just the [ones who are] easy to teach."

The top-performing school systems in the world have several things in common. For one, they focus on giving every child an excellent education (for instance, there are no magnet or charter schools dedicated to excellence, while regular public schools continue to fail). And another trait they share is the high value put on recruiting the best teachers--and accepting nothing less.

“It is gratifying to see that Secretary Duncan and the Obama Administration recognize the value of learning with the world’s highest performing nations to improve teaching and student performance,” says Asia Society Vice President for Education Tony Jackson. “We look forward to opportunities to continue that dialogue.”

Addressing teachers, Duncan said: “We understand that you are doing society’s most important work. We will support you in your work and we will work together with you to elevate and strengthen the teaching profession, because nothing less than America’s future rests on your collective shoulders.”

Today, more than half a century after Brown versus Board of Education and the Little Rock Nine, the promise of equal education remains unfilled for millions of low-income and minority Americans. This unfilled promise led Congress in 1965 to create a federal law specifically aimed at overcoming inherent inequities in education.

Virtually every administration has put its stamp on that law -- including Bill Clinton's and George W. Bush's. Now it's President Obama's turn. Our work has been underway for more than a year and while it may not make it to the finish line in the current session of Congress we expect it to be among the top priorities in the next one.

In any case, our approach to reforming the Elementary and Secondary Education Act is fairly straightforward and is defined by three words: fair, flexible and focused.

Instead of holding only schools accountable we want to hold districts and states more accountable. No school is an island operating in isolation.

Instead of prescribing specific and often impractical interventions for the vast majority of schools -- we want to offer a clear definition of success and let most schools figure out how to get there. We must better support creativity and innovation at the local level which is where the best ideas will always come from. ...

Nothing is more important and nothing has a greater impact on the quality of education than the quality and skill of the person standing in the front of the class -- and there is so much that needs to change in the way that America recruits, trains, supports and manages our teachers.

Today, there are many different approaches to strengthening the teaching profession -- both here in America and in countries that are outperforming us like Finland and Singapore.

The Asia Society recently held an international symposium on teacher quality and they found that high-performing countries put much more energy into recruiting, preparing, and supporting good teachers -- rather than on the back end of reducing attrition or firing weak teachers.

Our competitors in other parts of the world recognize that the roles of teachers are changing. Today, they are expected to prepare knowledge workers, not factory workers, and to help every child succeed -- not just the "easy to teach." They have to harness new technologies and teach higher order thinking.

According to the report from the symposium, Singapore selects prospective teachers from the top third of the class and in Finland only one in ten applicants is accepted into teacher preparation programs. They only pick the very best.

England undertook a series of steps to raise the status of the teaching profession including a sophisticated advertising campaign, a televised awards program to raise the profile of teaching, and encouragement for alternate routes into teaching.

The other big findings are that the best teacher preparation programs place more emphasis on guided practice in classroom settings, more focus on problem solving and creativity, and more attention on the use of data and assessment to guide instruction.

When it comes to compensation and evaluation, there is greater variation. We know that entry-level salaries for teachers need to be competitive with other jobs in order to attract high-quality graduates, but beyond that, working conditions are more important than salary. Finland and Canada do not pay teachers based on their performance, but China and Singapore do. And many countries use financial incentives to teach in hard-to-staff schools.

Most important, teachers in Singapore are appraised annually by several people and across multiple measures, including classroom delivery, collaboration with parents and community groups, and contribution to their colleagues and the school as a whole.

Support for the Learning With the World initiative is generously provided by MetLife Foundation.