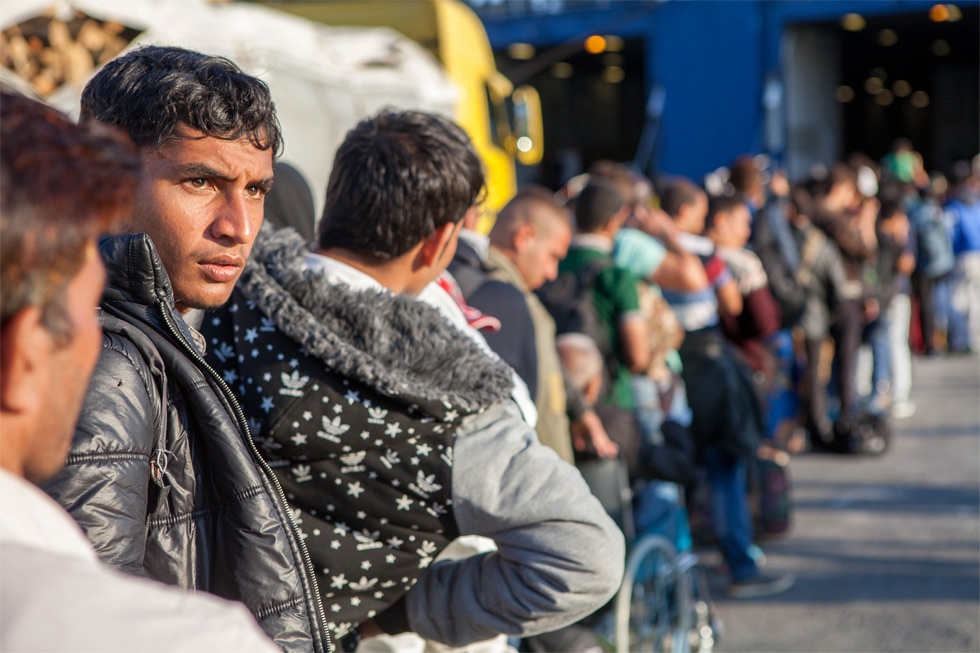 NEW YORK, February 15, 2017 — The recent news has been dominated by President Trump's words, tweets, and actions, including one of his first, and arguably, most controversial: his executive order, "Protecting the Nation from Foreign Terrorist Entry into the United States," frequently referred to as a "travel ban" or "Muslim ban." Although the order is currently blocked from further implementation by the U.S. Court of Appeals for the Ninth Circuit, fear and uncertainty remains, especially for students and families who are immigrants to the United States, and those who practice the Muslim faith.

Thus, it is ever more critical for educators to reinforce with all students that we are a diverse nation living in a global world, and we cannot function unless we respect other opinions and viewpoints with empathy and understanding. To that end, we have compiled a wealth of resources to help you facilitate discussions about diversity, inclusion, and current issues like the executive order with your students and your community. We will continue to compile resources on our website as we learn of them. As you come across valuable resources in your work, please share them with us, and we will add them to our collection.

Immigration and Borders: Student Exploration Through Art, Dialogue, and Travel
By Ryan Sprott
Many teachers are struggling to include the topic of immigration in their classrooms. Ryan Sprott, AP World History teacher at International School of the Americas in San Antonio, Texas, created the Border-land project as a way to get his students exploring these issues on a deep level. Read on to learn how he created it.

'Learn from History!': Students Discuss the Muslim Ban
By Christina Torres, University Laboratory School in Honolulu
Christina Torres describes how she approached discussing the Muslim ban with her students. In her article, she writes: "We have two real jobs as teachers. Our jobs boil down to these things: First, to create a space of safety, validation, and ultimately love for our students; and second, to teach them how to critically question power, advocate for themselves and others, and resist oppression."

Against the Ban? Five Things You Can Do Now
By Joyce Dubensky, Tanenbaum Center for Interreligious Understanding
Tanenbaum's CEO Joyce Dubensky discusses the travel ban and provides resources for five ways you and your students can take action now.

President Trump's Executive Order on Immigration and Refugee Policy: Source Reliability and Analysis
By The Choices Program, Boston University
In this lesson plan from the Choice Program, students have the opportunity to practice source analysis skills; consider bias, audience, and author expertise to assess source reliability; learn about persuasive techniques and argument-building in media sources; and compare and contrast opinions about the executive order.

In the News: Strikes and Boycotts
By the Morningside Center for Teaching Social Responsibility
In this lesson plan, students explore two forms of nonviolent protest, strikes and boycotts, using as case studies the strike by the New York Taxi Workers Alliance and the #DeleteUber campaign, both in response to an immigration ban imposed by President Trump.

"Extreme Vetting": U.S. Refugee Process and the Trump Ban
By the Morningside Center for Teaching Social Responsibility
In this lesson plan, students learn about and discuss the U.S.' existing policy for vetting refugees and what happened to refugees after President Trump signed an executive order temporarily suspending the U.S. refugee program.

All International Laws Trump's Muslim Ban is Breaking
By Jamil Dakwar
Jamil Dakwar is the director of the ACLU's Human Rights program, and in this opinion piece, he discusses President Trump's executive order in the context of international law.

Meet a School of Immigrants with a Complex Connection to Donald Trump
By Madeline Will
A famous California property that President Donald Trump once owned and fought to keep in a lengthy legal battle is now a multicultural K-12 campus of community schools that, in many ways, is antithetical to some of the president's pronouncements.

Great American Dreaming: Documenting Stories of Immigration in Your Community
By What Kids Can Do
One of the best ways to engage students in the critical debate around immigration, according to nonprofit organization What Kids Can Do, is to have them gather the stories (and images) of immigrants near at hand. Your students can bring back powerful interviews if they venture into their communities to talk to immigrants they meet or know about their experiences.

Asian Americans Then and Now
By the Center for Global Education at Asia Society
A look at the long history of Asian Americans, including Japanese internment during World War II, and its role in shaping American identity.

Diversity is Our Strength
By Cleary Vaughan-Lee, Global Oneness Project
During this challenging time in history, when the political landscape is volatile and tensions are escalating, what if we imagined all of the children of the world as our own?

Building Empathy in Children: Lessons from Early Childhood Education
By Stefanie Paige Wieder
Stefanie Paige Wieder, a child development expert with over 20 years of experience working with families and educators, shares lessons and resources for building empathy in students.

The Backlash Against Teaching About Islam
By Kimberly Keiserman, Tanenbaum Center for Interreligious Understanding
Kimberly Keiserman, Education Program Associate, Tanenbaum Center for Interreligious Understanding, examines the backlash many educators are facing when teaching about Islam and provides resources on best practices for teaching about Islam and other world religions.

Islamic Networks Group
Islamic Networks Group is a nonprofit organization whose mission is to counter prejudice and discrimination against American Muslims by teaching about their traditions and contributions in the context of America’s history and cultural diversity, while building relations between American Muslims and other groups. They offer curricula, speakers, and other educational resources.

Teaching Global Competence Against a Wave of Anti-Globalism
By Ariel Tichnor-Wagner, ASCD
As the dust settles on the bitterly contested 2016 U.S. presidential election, many educators are seeing a clearer vision of what we must teach the next generation of voters.

Civics Education is the Foundation for Global Citizenship
By Heather Loewecke, Center for Global Education at Asia Society
Heather Loewecke examines how civics education can prepare all students to be active citizens of the United States and the world and provides resources for doing just that.

Know Your Rights
By the American Civil Liberties Union
The ACLU has pulled together resources on your rights on multiple topics, including immigration, anti-Muslim discrimination, protests and demonstrations, and more!

iCivics
iCivics works to engage students in meaningful civic learning. Their mission is to ensure every student receives a high-quality civic education, and becomes engaged in the classroom and beyond.

Immigration, Xenophobia, and Racism: Teaching Global Competence Using the 2016 Presidential Election
By Apoorvaa Joshi, Center for Global Education at Asia Society
Asia Society’s Apoorvaa Joshi digs through the (mis)information in the 24-hour news cycle and provides ideas and strategies for using the 2016 presidential election to build students’ global competence. The lessons apply beyond the election and can be used broadly in civics education.

Neville Fights Back
By The Harry Potter Alliance
Sometimes, it can feel like problems are just too big—like we can't influence policy, or like hatred and bigotry are too powerful. At those times, we remember Neville Longbottom.

Addressing Hate and Intolerance in Trump's America
By Jennifer Fichamba, Tukwila School District
Jennifer Fichamba, college and career readiness specialist at Showalter Middle School in Tukwila, Washington, discusses how her school responded to student fears after the election of President Trump and the subsequent travel ban.

Reflecting on Character, Community, and Global Competence
By Apoorvaa Joshi, Center for Global Education at Asia Society
Apoorvaa Joshi came to United States at a young age and became a citizen as a teenager. In this piece, she reflects on her experience as an immigrant and the critical importance of global competence.

Why America Needs Foreign Entrepreneurs
By Ido Leffler, Yoobi CEO
Ido Leffler, co-chair of the Center for Global Education at Asia Society Council, reflects on his own journey to the United States and argues that immigration helps America's economy.

The Antidote to Extremism
By Tony Jackson, Center for Global Education at Asia Society
Tony Jackson explores how global education can serve as an antidote to political and violent extremism of all stripes, and he examines the practices of two schools in Asia Society's International Studies Schools Network and how they're empowering their students to investigate the world, recognize perspectives, communicate ideas, and take action.

We Make America Great
YCTeen, Issue 255
The January/February 2017 issue of YCTeen focuses on student voices in the time of President Trump, with teens sharing powerful stories of their experiences and strong arguments for change.

Immigrant Issues
YCTeen
Students share their personal stories and their ideas on immigration in America, particularly in the time of President Trump.

Global Competence as a Matter of Equity
By Tony Jackson, Center for Global Education at Asia Society
Asia Society Vice President of Education Tony Jackson reflects on his own experiences with global competence and describes how teaching through a global lens can help address the equity issues we face in education.

Video: Asian Americans Offer Advice to President Trump
By Asia Society
In the 2016 U.S. presidential election, Asian American voters made their preferences clear: Exit polls suggested that despite Hillary Clinton's defeat to Donald Trump, Americans of Asian descent supported the former secretary of state by a 65 to 29 percent margin. In the aftermath of the election result, Asia Society gave Asian Americans a chance to give advice to the 45th president—on camera.