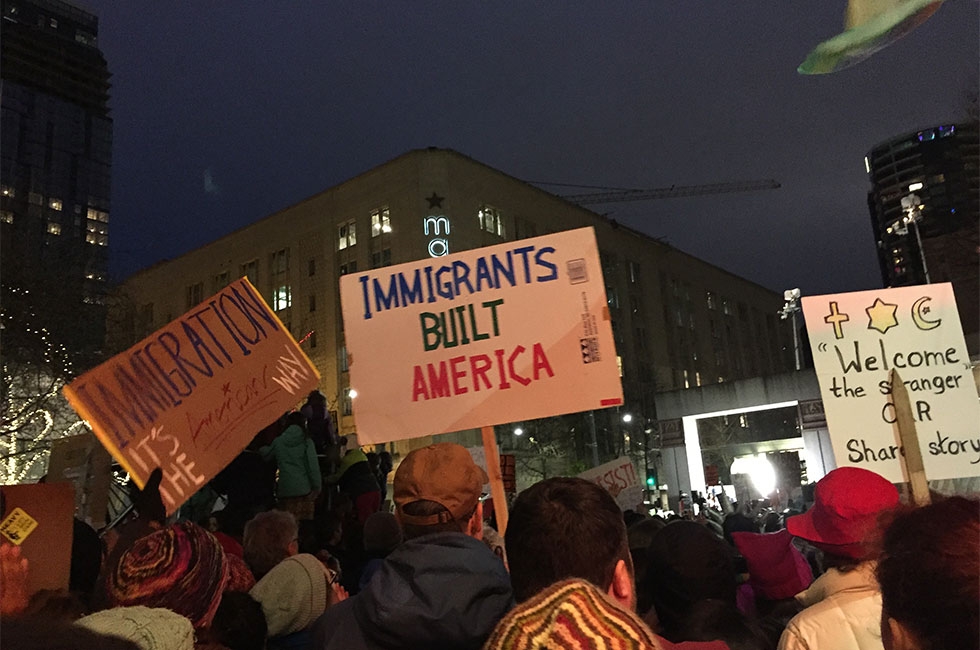 In the article below, Laura Tavares, with Facing History and Ourselves, discusses three ways to talk about immigration, including the recent immigration ban, with your students. This article was originally published on Facing Today on January 30, 2017.

This week, President Donald Trump announced several measures to limit immigration to the United States. His administration shared plans to build a wall on the Mexican border and to more aggressively deport undocumented immigrants. He also announced an order barring Syrians and other refugees from entering the country and suspended immigration from seven primarily Muslim nations.

It’s not yet clear exactly when and how these proposals will be enacted, but their effects are already being felt in schools. Immigrant students, both undocumented and legal—or those with undocumented family members—feel afraid and uncertain. Bullying and harassment of immigrant and Muslim students, and students from all different ethnic and religious groups, spiked following the election and still continues. How should teachers and school leaders address the fears felt by so many students? How can educators help all students understand these unfolding events, examine the motivations behind different policy proposals, and reflect on what is at stake in America’s stance towards immigrants and refugees?

While there is no one approach that will meet the needs of all schools and students in this complex and evolving moment, we offer the following three ideas to address this week’s announcements about immigration and refugee policy with your students. And we invite you to share stories, challenges, and questions from your own classrooms by commenting at the end of this post.

1. Affirm the right to education and respect for all students

In 1982, the Supreme Court ruled in Plyler v. Doe that undocumented children have a constitutionally-protected right to public education. The Court reasoned that all young people must have access to schools for their individual development and because “education has a fundamental role in maintaining the fabric of our society" and imparts “fundamental values necessary to the maintenance of a democratic political system.”

The Plyler decision educates young people about their rights and its reasoning also invites teachers and students to consider what it might look like for schools to “maintain the fabric” of a democratic society. The reading, "Believing in Britain," drawn from Facing History and Ourselves’ resource, Stories of Identity, is another entry point for exploring the relationship between education and belonging. In this excerpt from his memoir, Ed Husain describes his experiences as a child of Pakistani immigrants in England and the ways teachers at his school nurtured his “belief in Britain, an unspoken appreciation of its values of fairness and equality.” Share this text with colleagues or students and discuss:

2. Use the “universe of obligation” to consider how we define our responsibility to others

This lesson introduces the concept of the “universe of obligation” using a reading and a graphic organizer. After introducing the concept, you can discuss these questions with students:

3. Put debates about immigration and refugees in historical perspective

Many observers of today’s global refugee crisis have drawn parallels to the 1930s, when German territorial aggression and persecution of Jews sparked a refugee crisis in Europe. Two lessons from Facing History and Ourselves help put today’s refugee crisis in historical perspective:

Both lessons invite us to consider how learning about the history of refugees in the 1930s might inform the choices that individuals and governments make about refugees today.