Exploring China through the Experiences of Migrant Workers 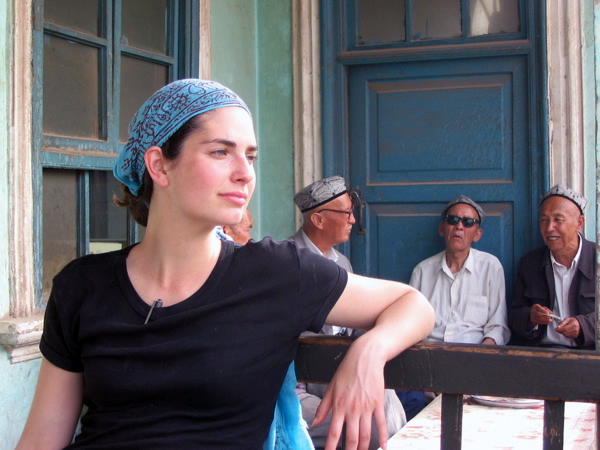 Samm Tyroler-Cooper is a Research Associate for the Council on Foreign Relations in New York City, working on domestic and foreign policy development, non-proliferation, economics and trade, human rights, and political leadership for the Council's China Task Force. In 2004-5, she was a Fulbright Scholar in Beijing, researching migrant workers' rights.

You just finished running a marathon in California and mentioned that you do one each time before going to China. Why is that?

It hasn't been a deliberate move, but I recently realized that the two marathons I have run happen to come right before I am about to move to China. The first time was my senior year in college. I decided that after I graduated I wanted to move to Beijing, but I had no job, no Fulbright fellowship at that point and was going to go over and just make something happen for myself. This was both exhilarating and terrifying.

About three weeks before my scheduled departure to Beijing, I ran the Sugarloaf Marathon in Maine. It turned out that about a week after the Sugarloaf marathon, I learned that I won a Fulbright award. But I always remember that I had been prepared to go to China with nothing lined up and that facing the challenge of the marathon somehow gave me the necessary courage.

You said your interest in Chinese stemmed from a dislike of Spanish in high school. What happened?

I got a C on a Spanish exam in eighth grade and realized that I needed to switch to a language with a simple grammar structure. Chinese has much simpler grammar than Spanish!

Your first visit to China was for a summer language program in college.  Did you immediately like China?

I thought Beijing was stinky, polluted, and ugly the first time I went as a student in the Princeton summer language immersion program. Even though I was in love with the language, I thought I was repulsed by China. I even remember asking my professor if it would be possible to devote my life to studying Chinese without ever having to step foot in the country again! But for some reason, China had a deep pull on me and I found myself there again after college. During that year, I fell in love with China, not just with the language.

What changed for you?

I began to see Beijing, and then China, through new eyes. I rode my bike down the narrow hutongs in the fall when people were selling roasted sweet potatoes and steamed buns. I made friends with a family and started going to their house for meals. Gradually, my appreciation started to expand out and before I knew it, I was no longer frustrated by the things that bothered me before about China.

The other thing that happened is I got outside of Beijing into the rural areas. I had only been in the city on my first trip to China. Seeing the countryside and wandering through the villages gave me a whole new view of China.

How did you become interested in helping migrant workers in China?

I taught English to Chinese immigrants at a community center near Brown University during my sophomore and junior year. As a teacher, I became close with my students and started to learn their stories and struggles coming from China to the U.S. -- from problems with visas to cultural assimilation. I knew I wanted to live in China after graduating from Brown and thought that it would be interesting to combine my interest in immigration issues with studies of Chinese society and politics.

Your sketches of people in China are very interesting. How do people react when you draw them?

I found that people loved to see sketches of themselves! When I started drawing, they immediately had something to talk with me about and it started the conversation. They felt at ease, which is the opposite reaction I observed from when a foreigner took out a camera. Sometimes I would tear the drawing out of my sketchbook and give it to them. Other times I kept the drawings as documentation of the subjects.

You became close to one young woman named Hou Lijie. She even invited you back to her small village for Chinese New Year. What was her home like?

She lived in a village in the foothills of a mountain range in Hebei province. Her home was made out of a mud, straw, and wood mixture, with two small rooms for a family of five people. The main room was filled mostly by the kang. The kang is heated underneath by a stove and the family sits on it to eat and watch TV during the day and then converts it to bed for sleeping at night.

There was no heat in the house except for the kang and it was super cozy!

What do you think are the aspirations of migrant workers like Hou Lijie?

They wanted to change their fate. Hou Lijie said to me, "What is going to happen to me here in Beijing? I want to study computers! But what if I end up not making it and end up a peasant like my parents?"

The second aspiration I heard had to do with education and "self-improvement." I heard many migrant women express a desire to learn more skills, such as computers or even law. While I think this desire was partly about their strategy for landing a better job, I also think they found satisfaction in the abstract idea of cultivating new skills and knowledge in themselves.

Are non-migrants concerned about the problems faced by the migrant workers, who are sometimes referred to as the "floating population?"

Many urban hukou (permanent resident permit) holders discriminate against rural migrants. They think migrant workers cause crime and are not as "civilized." But other urbanites recognize that migrant workers make invaluable contributions to city life and want to help improve their situation. For instance, over Chinese New Year when many migrants return to their villages, China's cities suffer because there are few workers doing the service jobs that are thought to be the most "bitter" or undesirable.

In Yunnan, the province in China's far southwest; you and your boyfriend took off exploring on bikes for several days. You knocked at a farmhouse door and asked to stay the night. How did the people who lived there react?

They were very happy to have foreign guests and generously offered us a make-shift bed on the floor of their home. Their home was built on stilts in the middle of a field in southern Yunnan Province. I have never encountered such hospitality! They cooked a delicious meal for us and then showed us a music video of Communist propaganda. We all sang along using the written characters at the bottom of the screen.

What is next for you?

In the fall I start graduate school at Yale. I will be in the M.A. program in International Relations. Afterwards, I see myself pursuing a government position in Washington, or returning to China to work in the private sector or an N.G.O., or going into a doctorate program in history or sociology. Whatever path I choose, China will be at the center of my life's work.